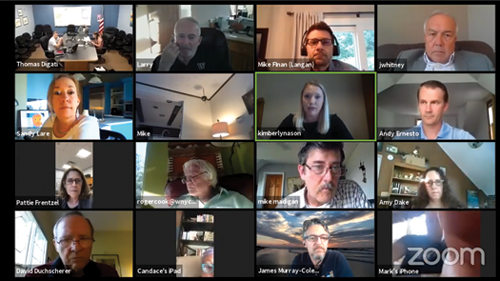 The Grand Island Town Board, Planning Board, developers of Project Olive for TC Buffalo, and residents met online Thursday night to discuss the giant e-commerce distribution facility under consideration.

Project Olive returned to the town government’s agenda with an online joint meeting of the Grand Island Town Board and Planning Board Thursday night.

The joint meeting, held online as the Dispatch went to press Thursday night, was slated to take place months ago before the current COVID-19 pandemic interrupted the normal course of the development. It was held online due to restrictions of public gatherings.

Phillips Lytle attorney Kim Nason presented on behalf of the developer, TC Buffalo, and said filings are all on the town’s website as well as www.tcbuffalograndisland.com.

“It’s an exciting project, again a symbol of the economic vitality of the town, a project that will bring significant job creation and economic benefits to both the town and the region,” Nason said. Project Olive is planned for 2780 Long Road, on 145 acres.

Nason said since the developer and government had last got together, “TC Buffalo has undertaken extensive outreach to provide detailed information on the project plan and to solicit feedback on any potential issues or concerns in connection with the project.”

Nason said, “In response, TC Buffalo has provided detailed comprehensive responses to all of these comments received. And as necessary, TC Buffalo will continue to do so to the extent there are any further new issues that arise that haven’t been addressed in the substantial materials submitted thus far.”

The revised traffic study came to the same conclusion as earlier studies, Nason said, and the traffic report by SRF Associates was “proposing the same mitigation” as in its earlier report: installation of a signal on Long Road/I-190 southbound ramp; and addition of a right turn lane for traffic exiting the I-190 northbound off-ramp to Grand Island Boulevard. Nason said “the project can be reasonably accommodated by the existing roadway network.”

In the public comment portion of the meeting, speakers supported the project for its economic potential, while critics raised environmental and traffic concerns.

Michael Lockett of the Island agreed with Nason that the traffic impact as described in the report would be “fairly minimal” and he said the project will provide jobs, help with taxes, and will cause “minimal” environmental impact.

Mark Valle also cited the traffic study in saying the impact “won’t be as bad as everybody is anticipating,” and he also pointed to the positive impact of the project on jobs and taxes.

Giorgio Panepinto of Second Avenue, an Island business owner himself, said Project Olive would be great for the town by generating jobs not just for the project, but for surrounding businesses, as well. Eric Fiebelkorn, as president of the Grand Island Chamber of Commerce, announced the chamber was offering “our wholehearted support for the project” and will elaborate in detail in the coming days on “why this is going to be great for the Grand Island community” with benefits outweighing the negatives.

Jim Mazza, who called himself an “immediate neighbor” to the project site, had concerns with pollution: air, noise, visual and odor. He asked about noise mitigation between the project site and homes on Long, Sunset, Bedell and West River. He also worried about “a dramatic effect” on property values of neighbors to “an industrial complex,” as well as possible flooding with the project creating an enormous hardscape footprint.

Roger Cook of West River Road and a member of the EDAB said that board passed a motion in March to hire an economic consultant to do a cost benefit analysis of the project and to review the economic estimates of what he called the “fourth-largest company in the world,” alluding to Amazon, the e-commerce company widely assumed to be the property occupant.

“I’m not convinced. I want to see the data,” Cook said in asking for a consultant. He called for something akin to “a community benefits agreement” to guarantee the windfall the developers estimate.

Dave Reilly of Whitehaven Road cited a report that estimates shipping goods to and from warehouses in the region produced millions of dollars “in uncompensated public costs for noise, road damage, accidents and harmful emissions in 2018 alone.”

Reilly said the project would “overwhelm the Island.”