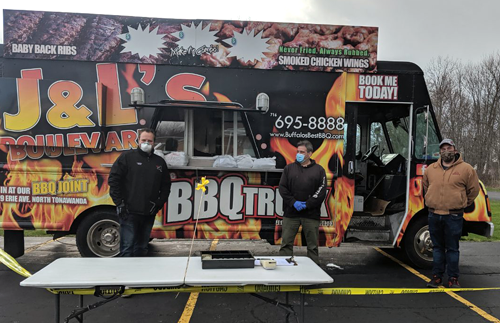 In the early weeks of the lockdown, Niagara County Legislator Jesse Gooch knew he wanted to do something for his district’s senior community. He partnered up with local food truck vendor J&L Boulevard BBQ to begin "Meals with Heart from 6 Feet Apart" to offer seniors $5 dinners (pickup only) from 5-6 p.m. each Wednesday at the Wheatfield Town Hall, 2800 Church Road.

The initiative has been a resounding success. After selling a respectable 67 meals in its first week, the program quickly gained popularity on social media. Sales have now totaled in the hundreds every week since, and last week’s grilled pork chop dinner sold out in less than a day. The initiative has been so successful that Gooch, as well as fellow legislator Richard L. Andres, have brought the event to North Tonawanda with pickups available from 5-6 p.m. each Thursday at the Fairhavens Church, 7337 Ward Road.

While perhaps no one is more stunned by the program’s success than Gooch, he said he’s just thrilled to have been able to bring something positive to the community.

“The results are a million times more positive than I ever thought it would be. It really just exploded,” Gooch said.

Many customers have been going out of their way to pay the good deed forward, often paying for the meals for the cars in line behind them. Others in the area have gone even further. A few weeks ago, town prosecutor Mat Mosher helped ensure that the barbecue rib dinner would remain at $5 by paying off the overall cost difference. One extra charitable resident who wished to remain anonymous donated $500 to pay for 100 meals.

When asked what it was like to see the community rally around this event, Gooch said it was all par for the course.

“I didn’t expect it, but I'm not surprised,” he said. “We have an amazing community. People are just good-hearted and they care…. I mean, it's just great that they're talking about it and taking care of each other, and their neighbors.”

The feedback from seniors has been overwhelmingly positive. For many, it’s not just about the meal, it’s the reminder there’s a community that cares for them that makes all the difference.

“The phone calls that I've been getting and the emails and letters in the mail – the seniors love it. People are saying things like, ‘This isn't just a nice night for us not to have to cook, but it really gives us hope in humanity,’” Gooch said. “It's a lot more than just getting meals for $5. A lot of them have been isolated, so just to get out for a half-hour to pick up a meal, it’s a huge thing for them. It's a sense of community. I'm glad that it's working out.”

While the initiative was initially planned to wrap up at the end of April, Gooch said that, since the shutdown continues, operations will continue for the rest of the month. But Gooch doesn’t mind the extra work. Neither does his 9-year-old son, Tyler, who also eagerly helps each week.

At the end of the day, Gooch said he’s proud to be a part of something positive in such uncertain times.

“I'm just happy that I'm able to be a part of it and that the community and the seniors are very receptive and appreciative of it. I just couldn't be happier,” he said.

Menu items for each week are announced every Friday at noon on Gooch’s Facebook page. Wheatfield seniors who wish to place an order are asked to call Gail Connery at 716-694-8504. North Tonawanda seniors are asked to call Kim Sinon at 716-423-9513. Customers are also urged not to call J&L Boulevard BBQ for orders. Orders are currently limited to seniors from the respective Wheatfield and North Tonawanda areas only.