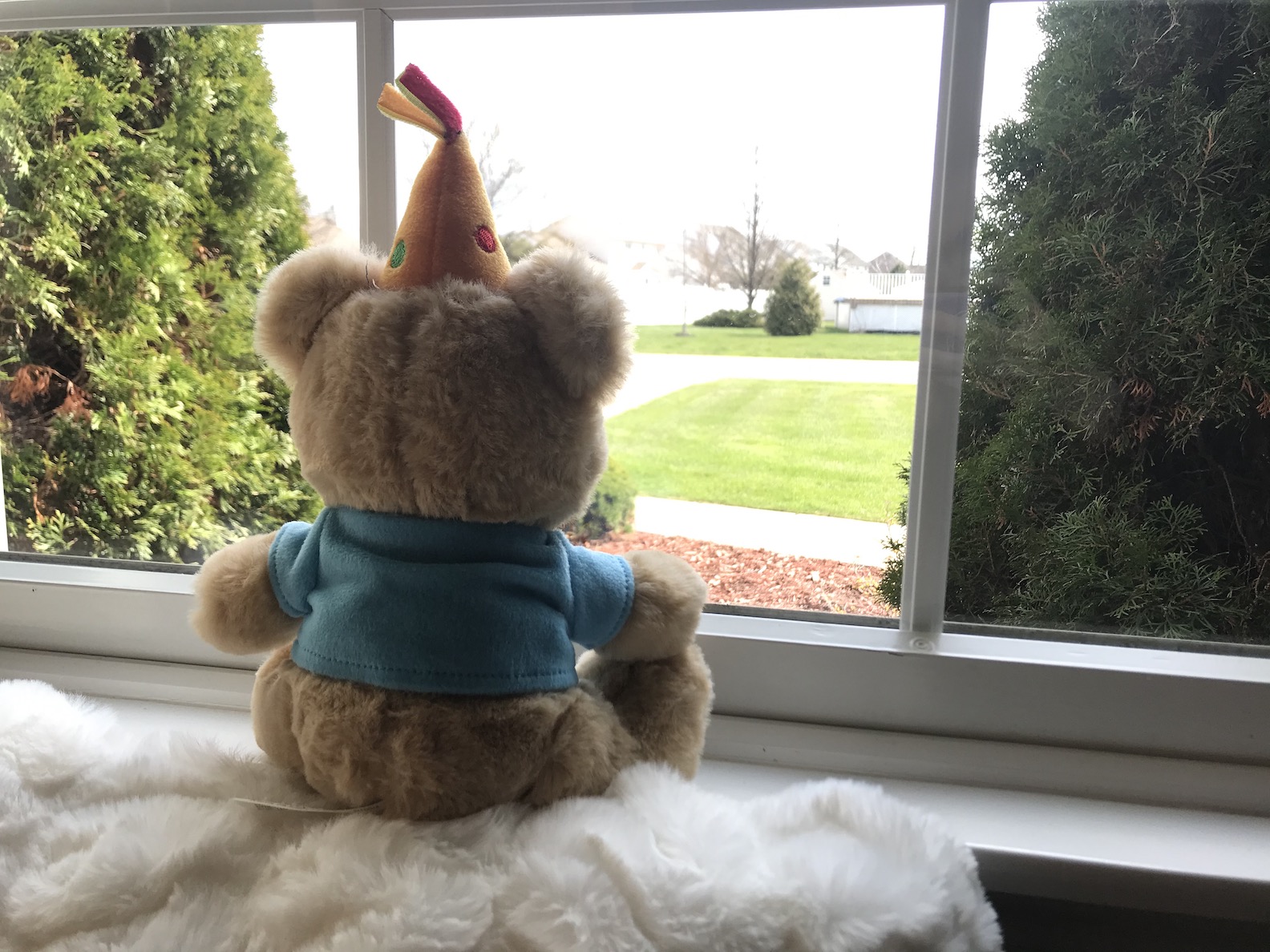 This social distancing is making it un"bear"able to continue to stay inside.

Coronavirus stories that will brighten your day

By Alexis Arth and Dylan Greenauer

What is the one big thing on everyone’s mind today? You guessed it … the coronavirus. Many, if not all countries are affected around the world by this fearful virus. More than 2 million people have been infected. There’s no telling on when things might get back to normal.

This also affects holidays, vacations, television programming and many things loved and looked forward to. Most people are doing what they can for themselves and others to make the current situation just a little bit better. We have the means with technology to communicate with one another. This lets life go on almost normally from the safety of our homes.

This is a glass half full or glass half empty type of situation. Everyone is doing their part to make the days go by smoother; to work through this “new normal” for now.

Teachers are doing what they can for their students: calling parents to check in, holding Zoom meetings to answer questions and being available to talk.

Elementary school teachers recently gathered together from a local school in Wheatfield for a car parade through the neighborhoods where their students live. They decorated their cars with balloons and paint to make the kids’ day brighter.

“During a time that can feel a bit stagnant, it was really neat seeing the teachers come together to parade around to their students homes to wave ‘Hello.’ It was a nice surprise for the kids and they thought it was very fun!” said Mallory Johnson, a mother of two. Her kids have been missing school lately and it was nice for them to be able to see familiar faces.

It is a tough time for kids, too. They are used to being on a schedule and attending school. Now that they are home all day, they need activities to keep busy.

A Facebook group was started locally called WNY Teddy Bear Hunt, inspired by the original Teddy Bear Hunt Facebook page. This encouraged families to place teddy bears in their windows for neighbors with young kids to go on a teddy bear hunt. According to the New York Times, neighborhoods participated all around the U.S. and even across the world.

Now is an especially challenging time for health care workers. They are dealing with the virus on the front lines. Medical professionals are protecting themselves to the best of their capability with what they are provided, even though supplies have run low. Citizens around the nation are doing their best to support local health care workers and show their appreciation. Many videos and pictures are circulating around the internet to show these special moments.

According to the “Today Show,” residents cheer at 7 p.m. every day out their windows in New York City for the health care workers at the change of their shifts. This is truly something that would have never been done before the virus affected all of our lives.

It has been especially hard on families, because the Easter season fell during this time. Many families were upset that they weren't allowed to celebrate together. It was a difficult time for many.

The owners of Platter’s Chocolates in North Tonawanda wanted to make the Easter season the best for everyone. They hopped into their car and drove the Easter bunny around to local neighborhoods in Wheatfield and North Tonawanda. The Easter Bunny usually makes a visit to Platter’s Chocolates, but under the circumstances, things were a little different this year. The store staff brought so many smiles to kids' faces driving around with the Easter Bunny.

Celebrities are even doing their share to help those in need and raise people’s spirits. Since many concerts are canceled for the rest of the year, artists are coming together to perform live on TV shows or through YouTube.

He stayed true to his promise and joined as many people’s Zoom parties as he could to perform mini concerts. It’s the simple things like this right now that bring smiles to everyone’s faces.

Most sporting events are postponed for the next few weeks due to the virus. Just like concerts being canceled, it is due to the amount of people who are brought together because of the events. That is not stopping the NFL. The NFL wants to keep its fans engaged with the sport and bring some happiness to its fans.

One of the NFL’s most important events of the year began Thursday, April 23. This year’s draft was not be like previous ones. This year, the draft was held over a video stream and not in person.

For draft-eligible college football players, the draft is one of the best days of their lives. It is a moment when all the hard work pays off and they finally reach their lifelong dream of being a part of the National Football League.

With the coronavirus pandemic happening, most sports have halted all activities. But the NFL decided it was not going to change the offseason schedule.

The league was adamant about having free agency happen on time, even though people and executives disagreed. With so many people forced to stay inside, it allowed people to escape what was happening outside and just focus on who was joining or leaving their favorite team.

In previous years, the NFL draft would be a prestigious event. The top draft prospects would be invited to the location of the draft and be able to walk out and get their new teams jersey and shake hands with Commissioner Roger Goodell.

But this draft was done over a video stream from Goodell’s basement. Each of the 32 teams had its own stream directly to the commissioner. The team's front office members were not able to be in the same room as team facilities are still closed, so they had meet together over video chat. NBCSports wrote an article with all the rules and parameters of the draft. The top talent in this year's draft still had the opportunity to talk to the commissioner and do TV interviews, but this was via stream. Also, the TV analysts and hosts did their duties from home and worked over stream.

As for other major sports drafts, Major League Baseball changed its whole parameters for the draft. This year, it will only have five rounds instead of 40, and all the non-drafted prospects will become free agents. It was also supposed to be the first year the draft was going to be held in Omaha, but that has been canceled. Baseball America, the leader in MLB draft coverage, covered the new rules of the draft and how it'll affect the talent.

As for the teams of the NBA, they are trying to join together and move the day of the draft back. As of right now, the NBA Draft will be held June 25.

Sometimes it is difficult to see the good in a bad situation like the coronavirus. But all the good coming from this situation just proves that, no matter what, communities – no matter how big or small they are – still come together to make it work.