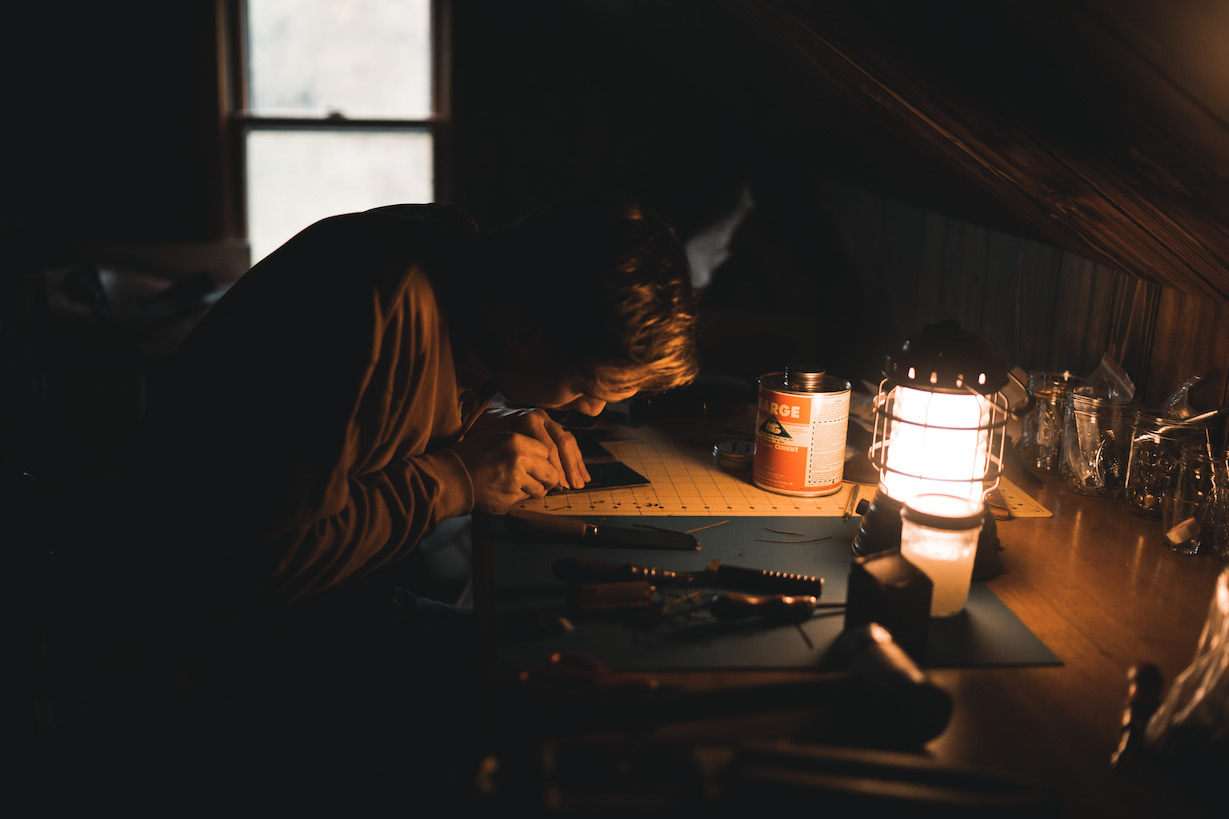 Jesse Saltarelli works on the New House Wallet in his workshop. (Photos courtesy of Dan Ottaviano)

Built to last: A man in pursuit of quality leatherwork

Light shines through the only window in a small room, onto a pair of steady hands patiently carving a line in the portion of leather before them.

Within the four, wood-paneled walls of an attic in a humble apartment in Orchard Park, Jesse Saltarelli sits in a wooden chair, working on a leather piece to add to his product line. It is hard to believe that handmade leather wallets, handbags, backpacks and custom designs come to life within this five-foot-high, A-framed space.

He works nestled between a table and a modest desk scattered with tools. Leather sits in rolls behind the desk. It is cramped, but sufficient for the job.

This attic space was created as a result of the pursuit of a craft. Jesse’s business, New House Leatherworks, was founded out of his desire to find a new hobby that fit his personality and the values he holds. He searched for years to find where his natural talent lay, picking up different hobbies, but never feeling like they were truly meant for him.

Then, in November of 2018, Jesse discovered his aptness for working with leather. He mentioned his interest in leatherwork to a work friend, who gave him some scraps to practice with. Immediately, he realized not only his innate ability for the trade, but also the joy it brought him.

“He loved it. He would lose track of time when he was working on a project, because he was so absorbed in it and so thoroughly enjoyed it,” said Sarah Saltarelli, Jesse’s wife.

After practicing for over a year, and doing smaller projects, Jesse purchased his first larger pieces of leather in January 2019. From there, the business began to grow.

Jesse’s philosophy for New House Leatherworks is simple: to make leather products that last generations, have endurance and exemplify integrity.

In many ways, these pieces are a reflection of Jesse’s personality.

“I have always been attracted to craftsmanship and beauty in natural materials. Leather is one of the oldest used materials in our culture, and I think this kind of work suits me, because it takes time and attention to detail,” Jesse said.

Handmade products, according to Jesse, are what truly define quality.

Mike Jans, the namesake of the Jans Minimalist Wallet, was looking for something small and durable that would stand up to the test of time, while still being functional. He turned to Jesse, and together they came up with a design that would work for Mike.

“It’s the nicest wallet I’ve ever had. It’s still in as good of shape as when I got it,” Jans said.

Now, the Jans Minimalist Wallet is one of New House Leatherworks main products, and a popular seller.

Jesse also stressed the use of naturally sourced leathers and materials, to achieve the highest quality leather goods possible.

“You can have something that’s made quickly, or slowly and meticulously, and I think that’s where the difference is with things that I do. It takes a lot more time, but I think what makes quality is good design and good material,” he explained.

One of his goals by doing this is to help build a culture of sustainability for these types of handmade, quality goods in the market.

Infrequent use of machinery is another of Jesse’s main goals. His tools sit before him on a small, wooden work desk. They include an edge beveller, a harness needle, some knives and a rawhide mallet. 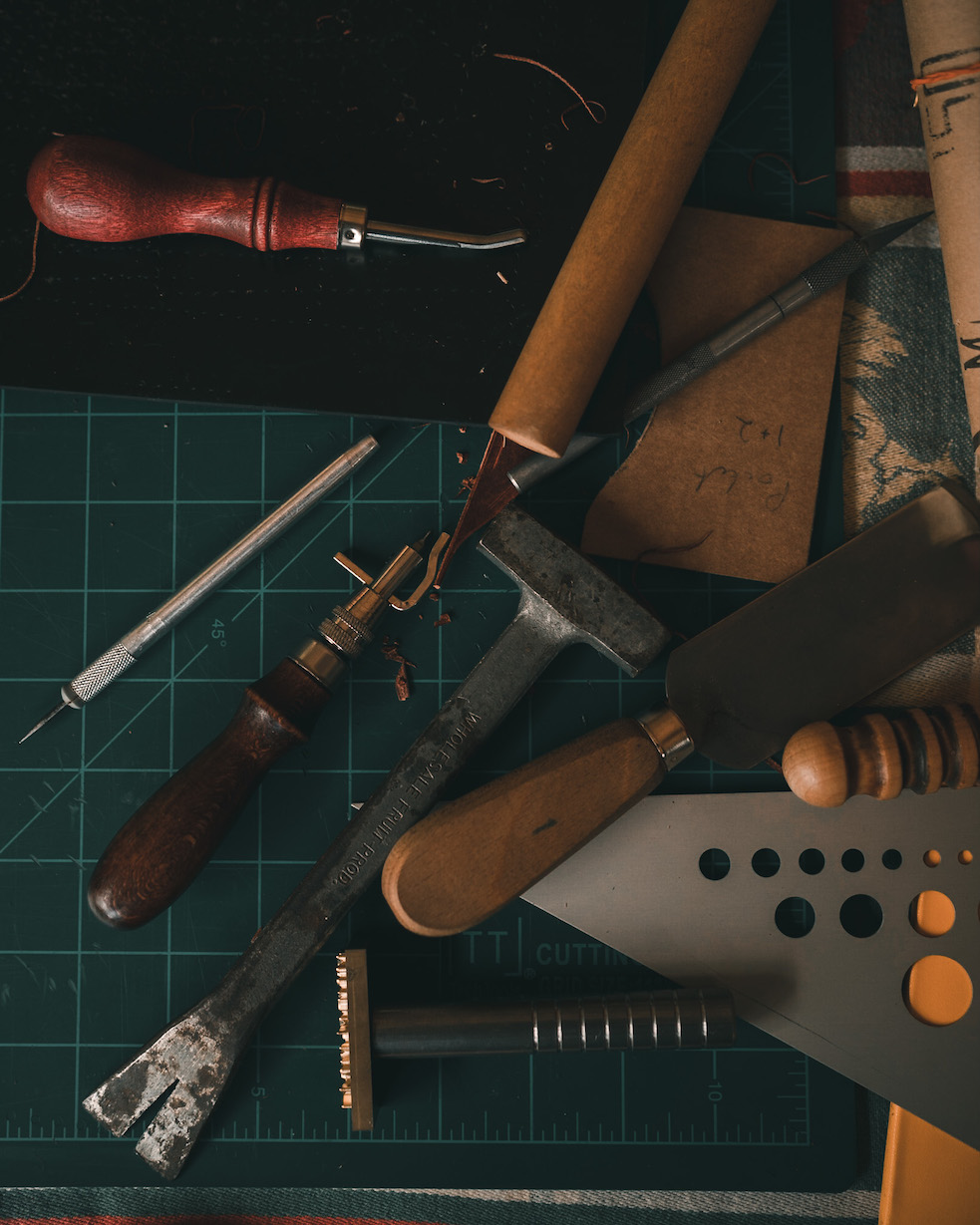 Jesse's leatherworking tools laid out on his desk. (Photo courtesy of Dan Ottaviano)

Besides using hand tools, hand stitching with the saddle-stitch method is another way Jesse achieves this goal. It is an old form of sewing, and another part of the creation process that contributes to the durability of his products.

This meticulous and minimal approach is not only a reflection of his personal values, but also what he hopes to share with the world. He has the desire to establish a greater appeal for handmade and local products in this age of consumerism and online shopping.

Dan Ottaviano, a photographic storyteller from Buffalo, has been able to assist with this hope, managing to skillfully capture this simplistic aspect of Jesse’s approach to leatherworking, while aligning it with his own goals as a photographer, as well. He shares Jesse’s love for long-lasting products, and photograph’s Jesse’s work with a purpose.

“I want to showcase how much work goes into something, so that it creates a greater appreciation for the owner of that product, where they'll take better care of it and it will last longer – which ultimately would decrease waste,” Ottaviano shared.

He did just that with Jesse’s work, capturing the process of the creation of the Jans Minimalist Wallet. Check it out here.

Ottaviano said he has an appreciation for Jesse’s work, specifically regarding its detail and the thought behind his designs. Having photographed the process of Jesse’s leatherworking for some time, he commented on the development of his products, and explained Jesse is willing to make tweaks and alterations to his designs, which make his products durable and sturdy in the end.

“They really are built to last,” Ottaviano said.

Jesse’s ability to emphasize the importance of the process that goes into crafting a quality leather good is what people like Dan say they truly find admirable about the work.

Included in this intentional process is the naming of Jesse’s products. He often names designs after those who have inspired him to create them. 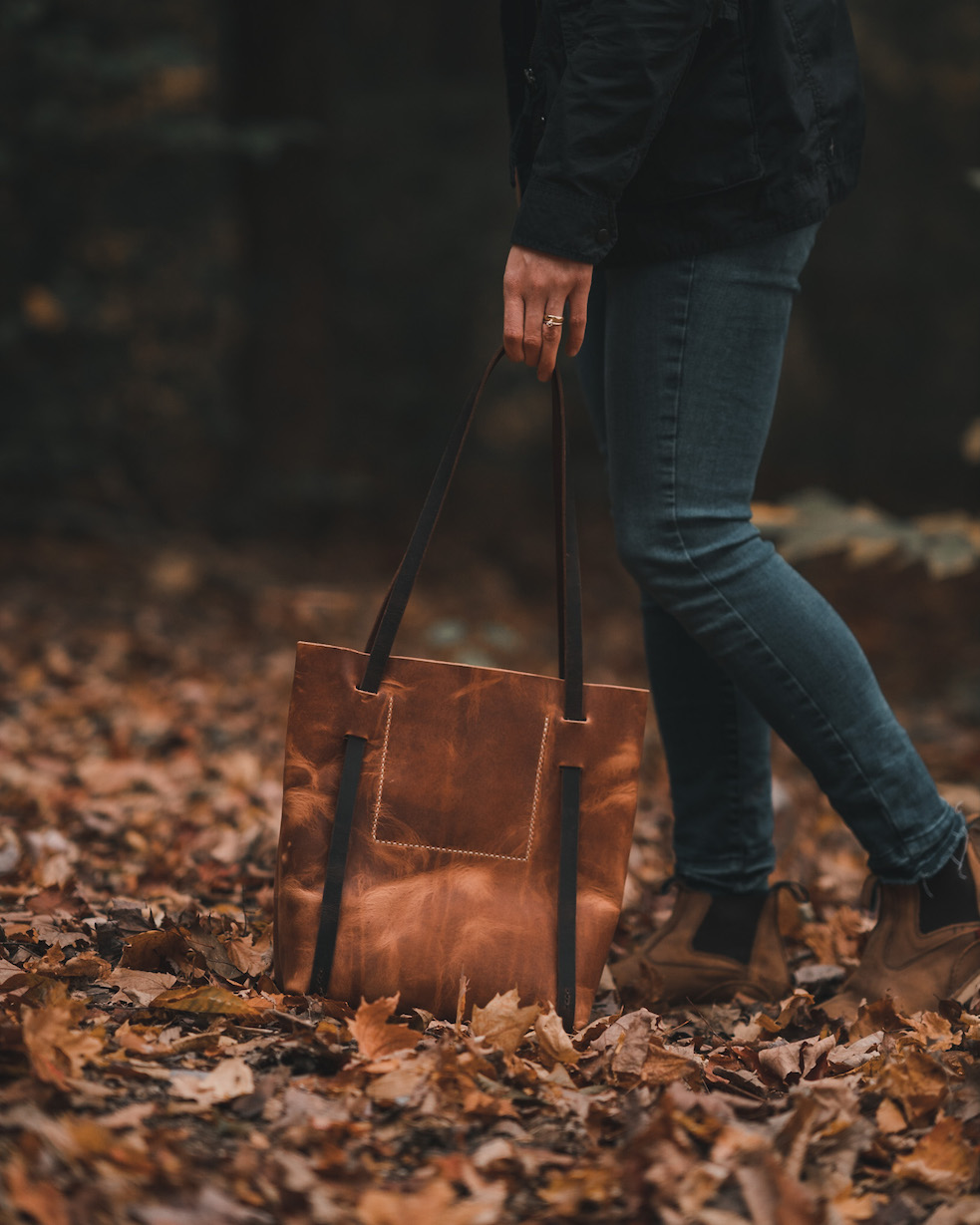 This photo features the Sarah Tote, one of New House Leatherworks' most popular selling products. (Photo courtesy of Dan Ottaviano)

“I wanted to name my products after the person who was the genesis of the need,” Jesse explained.

He made this decision after creating for his wife one of his very first products: the Sarah Tote.

After designing this tote out of a necessity, he started to name other custom products that he hoped to incorporate into his main product line, each one after the person who inspired them.

The Carol Ann is an especially fond product, named after Jesse’s grandmother. Together in her sewing room, the two chatted and talked about her design needs. While Jesse worked on leather, Carol was quilting – two artists working side by side.

Overall, the journey of New House Leatherworks has been a learning process for Jesse. His self-motivated personality is revealed as he continues to set goals for the future.

However, Jesse’s goals don’t stop there. Just as his products are stitched with sustainability in mind, his biggest dream is to make this trade a sustainable source of income for his family. A hope to one day open a storefront motivates him to constantly improve, working toward a more positive future for small businesses and handmade goods.

Get connected with Jesse Saltarelli

Get connected with Dan Ottaviano