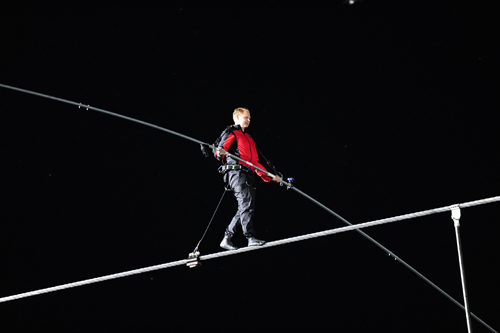 Seventh-generation aerialist Nik Wallenda will attempt his most ambitious highwire walk yet when he ascends to the top of the Masaya volcano in Nicaragua. “Volcano Live! with Nik Wallenda” will air at 8 p.m. Wednesday, March 4, on ABC (WKBW-TV Channel 7). This will be Wallenda’s highest and farthest wire walk.

The following is a Q&A with the man who, most notably in Western New York, crossed over Niagara Falls on a highwire in June 2012.

Q: When you have time or occasion to think back on that event in Niagara Falls, what comes to mind?

Nik Wallenda: You know what? It’s just great memories. I mean, obviously, a lot of stress came with that too, and the permitting process, but, you know, overall, I try to look at the positive outcome of every situation. And certainly there was a lot of positive they came out of that, and the struggles that I went through to get there, have kind of given me the stamina and the tenacity to be able to withstand what I’m going through for the volcano.

Q: What doors did that walk open for you?

I think, more than anything, I don’t know that it necessarily opened – to be honest with you, I thought it would open more doors – but I think it definitely proved to the world that I was capable of pulling this sort of thing off. So, in that sense, I would say it probably did open doors.

You know, again, I thought a lot more would come out of that directly, but life doesn’t always work that way. There’s always twists and turns, etc., and got sent down that road. In the end, through, it was obviously an incredible experience.

Q: You returned to New York for your walk across Time Square. What did that walk mean to both you and to your sister Lijana?

Nik Wallenda: It meant a lot. It was, obviously, a very emotional walk, and something that was really more about family.

More than anything, it was really just about my sister being able to prove to herself that she was able to get back and overcome. And through that, inspiring others: No matter what they're going through, if she can come through this near-death, near-fatal accident – and the outcome can be so positive that she recovers to the point of being able to get back on the horse – but the horse is the wire 200 feet above Times Square – than anybody can overcome anything.

And that’s kind of what our lives’ journey has been about, as a family, is really inspirational. And this was just another chapter in that book, for sure. And, again, for her, it was a lifechanging event, for sure, and something that, certainly, we both will cherish forever.

Q: Let's talk about Nicaragua. In the press release ABC sent out, you're quoted as saying that you were actively looking for a volcano. Tell me a little bit about how and why this walk came about. Is it a case where you and ABC were looking for something specific to top Times Square? What was the thought process behind this walk?

Nik Wallenda: No – and, in fact, none of my TV specials are brought on by the network. It’s ideas that I present, and say, “Here's what I'd like to do.”

The volcano is something that’s kind of been on my radar for quite a while. In fact, I think the first time I went public with it was a Buzzfeed article I did in like ’15 or ’14. It's been something that I've wanted to do for quite some time; and researched and studied and searched and searched more and, I mean, here we are, what? Three weeks out; and I’m still researching and learning more about volcanos, because that's kind of the name of the game, and the nature of the beast. You know, it's ever-changing, and it's Mother Nature and it's unpredictable – as I've learned over Niagara Falls and, of course, the Grand Canyon. They always come with their own challenges, and this one is just kind of the next chapter in my life of doing just that.

Q: Where are you training – and how do you train for a volcano?

Nik Wallenda: I train in my hometown of Sarasota, Florida – actually my backyard.

You know, really the majority of the training is … some of the limitations. I’ll have to wear a gasmask. So, an oxygen-deprivation mask is what I wear for training. It basically just trains me to be able to walk breathing from a straw, if you will. And that’s a big part of what I’m doing right now is, again, training for that, or with that, as well as training with a weight vest; training with, of course, the balancing pole that I’ll use. And then bringing a wind machine similar to what I did when I walked over Niagara Falls and the Grand Canyon.

So, there's a lot of unknowns, and that's where experience certainly comes into play. But it's also very stressful, leading up to this to this walk on March 4.

Q: How have you found it it's been training with the mask? What kind of a challenge has that posed for you?

Nik Wallenda: Just like anything, it’s a challenge that I have to overcome; I have to learn to overcome and to do that. You just kind of do it. It’s by repetitiveness. It’s about doing it redundantly, over and over and over again. And again, trying to simulate worst cases – if you can do that.

Q: You mentioned the impact on the wire is unknown and something that you'll have to adapt to at that time. What about your shoes? What about your pole? Do those things have to be made differently, relative to past walks?

Nik Wallenda: They’ll be very similar. In fact, the shoes will definitely be identical – and the balancing pole, in fact.

You know, the environment is more about – it's about over time. If we put the cable up at 6 p.m., and I walk at 7 Central in that time zone, it would be a big deal. That cable has to go up weeks in advance, in order to get it to settle and stabilize, which is what creates a challenge.

And to be honest with you, it doesn't necessarily have to go up weeks in advance. The reason why we're having to set it up weeks in advance is because of the weather – how unpredictable it is for the rigging team, in order to make sure that that wire is set up and stabilized properly, with enough time; because there are times where the wave of the weather or the gases get so thick that the team won’t be able to rig, and they’ll have to leave the site. So, because of that, we have to plan for – rather than rain days, which you could call it that – we're planning for gas days.

Q: You know, I'm sure you get two different responses to your walks, and I want to ask you about each of them. Certainly, when you're on the high wire, we see you praying and praising. And I know that blesses me personally. But what have people told you about that, and what that means to them?

Nik Wallenda: I would tell you that I have received very, very, very little negative feedback from that. And I think the reason is, is because it’s so authentic and real and raw. And it's not me trying to preach to somebody. It's me living my life, just like everybody lives their life – this just happens to be broadcast on TV around the globe.

I receive very little backlash. Most of it is positive, of people that have been inspired and encouraged – encouraged to be more bold in their faith and more bold in their recovery process, whether they're going through a health issue or recovering from an accident, etc. Generally, 99.9% is positive feedback, which is pretty amazing. And again, the reason why, I believe, is because it is not as though I'm putting on a show on the middle of the wire. The wire walk itself is obviously entertaining. But it's just me living my life out in the open, and real and raw.

Q: Well, it's interesting that you say that, because the other reaction is, of course, to quote the actor Dulé Hill, I'm sure people tell you that you must be out your damn mind. Even more so with “The Ring of Fire.” So, what do you say to those people who question why you do this?

Nik Wallenda: You know, I guess there could be two ways.

If you look at it from a religious aspect, people would say, “Are you testing God?” Or tempting God. And the reality is, in no way. If I was testing or tempting God, I would just go out there without any training, without any preparation, without any skill, and just say, “All right, here we go. Let’s see what happens.” Or throw myself off the wire and say, “Well, God, if you’re real, you’ll catch me.”

The reality is, I know in my heart of hearts that he could, and has the ability to, but I don't ever want to test that theory. And in that, again, it is up to me to train and prepare properly before I do these events. Because I believe God has given me this unique talent and, again, that part is up to me, to train.

And, yes, of course, people – not just not about the faith part – will often say, “You're out of your mind.” But, look, I'm living out my passion. There are very few people in the world that they can literally go to work every day and are happy.

I’m writing a book right now on overcoming fear, because I believe that so many people are held back by fear. They're stuck in the job that they're miserable at because of fear, and they're scared to live their life to the fullest and climb Mount Everest, because of fear.

And, really, my dream is, by what I do, to kind of encourage and inspire them that sometimes we have to walk through that fear in order to become the greatness that we are called to be.

So, I understand why they might say that I’m crazy, but the reality is, to me, what I do is very, very normal; and they’re crazy for sitting at that desk, per se, and not living their dreams.

Q: Do you allow yourself to think about what's next? Or is it all hands on deck, all thoughts, all effort toward Nicaragua?

Nik Wallenda: I would say at this point it’s certainly all hands on deck. Everything is about Nicaragua and nothing else. That is my focus. But certainly, there's always the thoughts of, “OK, what's next?” You know, I’m always working on the next one, if you will.

And, of course, your next question is, “What is it?” And, of course, my answer is I won’t announce that until I'm further down the line with permission from that.

I'm constantly thinking about what's next. But, again, this close to an event, it really is focused solely on the event itself that’s coming up.