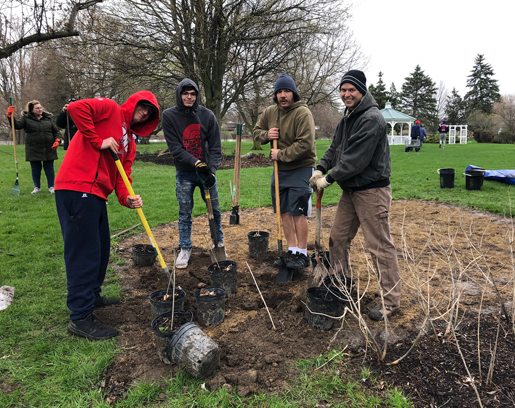 Last year, volunteers dug up the plants to be potted by Niagara-Wheatfield high School students in a series of hands-on learning experiences, the first of which was Feb. 19.

An environmental justice grant was announced at last week’s quarterly meeting of the NTBGO, freeing students from studying theory in their biology classes and giving them the opportunity to have hands-on experience planting dahlias previously stored in Conti’s basement.

“High school kids are coming out to the botanical gardens. They’re going to be there from 10 a.m. till 1:30 p.m.,” Conti said. “Our members dug out about 80 dahlia plants last year out of our butterfly garden – they’re pretty good size clumps. We have the greenhouse ready for them; we have the water system ready; and they’ll be working.

“They’re probably going to have to pot-up, somewhere between, 200 and 300 plants. They’re going to understand how this whole system works.”

As part of the schedule, members of the organization planned to speak with the students about the importance of volunteering, the environment, and specifically of the native plants and pollinators found in the area.

“We’re pretty excited about that. It’s a two-year program that we’re in the midst of right now,” Conti said.

The funding came from a $47,162 grant for the North Tonawanda Sustainable Community Project, one of the 21 community-based projects that address environmental and public health concerns across the state signed by Gov. Andrew Cuomo on Feb. 3.

“When we support grassroots efforts to build a greener, healthier and more sustainable New York, everyone benefits,” Cuomo said in a statement released that day. “This newest round of Community Impact Grants will make a positive difference in the lives of all New Yorkers through innovation and successful initiatives that promote environmental justice and a better quality of life.”

$1.9 million in grant funds were released for the NTBGO and other programs. New York state has awarded $11 million in grants for environmental justice groups since 2011.

“We are committed to do 16 sessions in the next two years,” said Robbyn Drake, one of the members of the NTBGO and the environmental grant writer who secured the funds. “We’re planning out the dates and we have a list of what they’re going to learn.”

Drake also updated the group on progress with setting up the gardens for 120 middle school students who will be coming sometime in September.

“We’ll do two of those,” she said. “One this year, and one next year. We’re setting up all that schedule now and getting the parts in place.”

Another notable event occurred at the meeting when Alderman-at-Large Bob Pecoraro suggested the group get involved with the Chamber of Commerce.

“We decided to have a volunteer fair on Feb. 29, a leap year, at 10 a.m. at Webster’s Kitchen where people could come in to contribute to volunteer at these tourist-related businesses, associations, where they need volunteers,” Pecoraro said. “The Botanical Garden is one of those organizations that has been highlighted to be at a table to accept volunteers, but with that you’re going to need specific days and times of when you want those volunteers to work on the projects you want them to work on.”

Being the vice-president of the Chamber of Commerce, Pecoraro said he could not make a motion himself, but that was quickly taken care of by Conti. After some discussion about the networking opportunities the Chamber offered, the group voted unanimously to join.