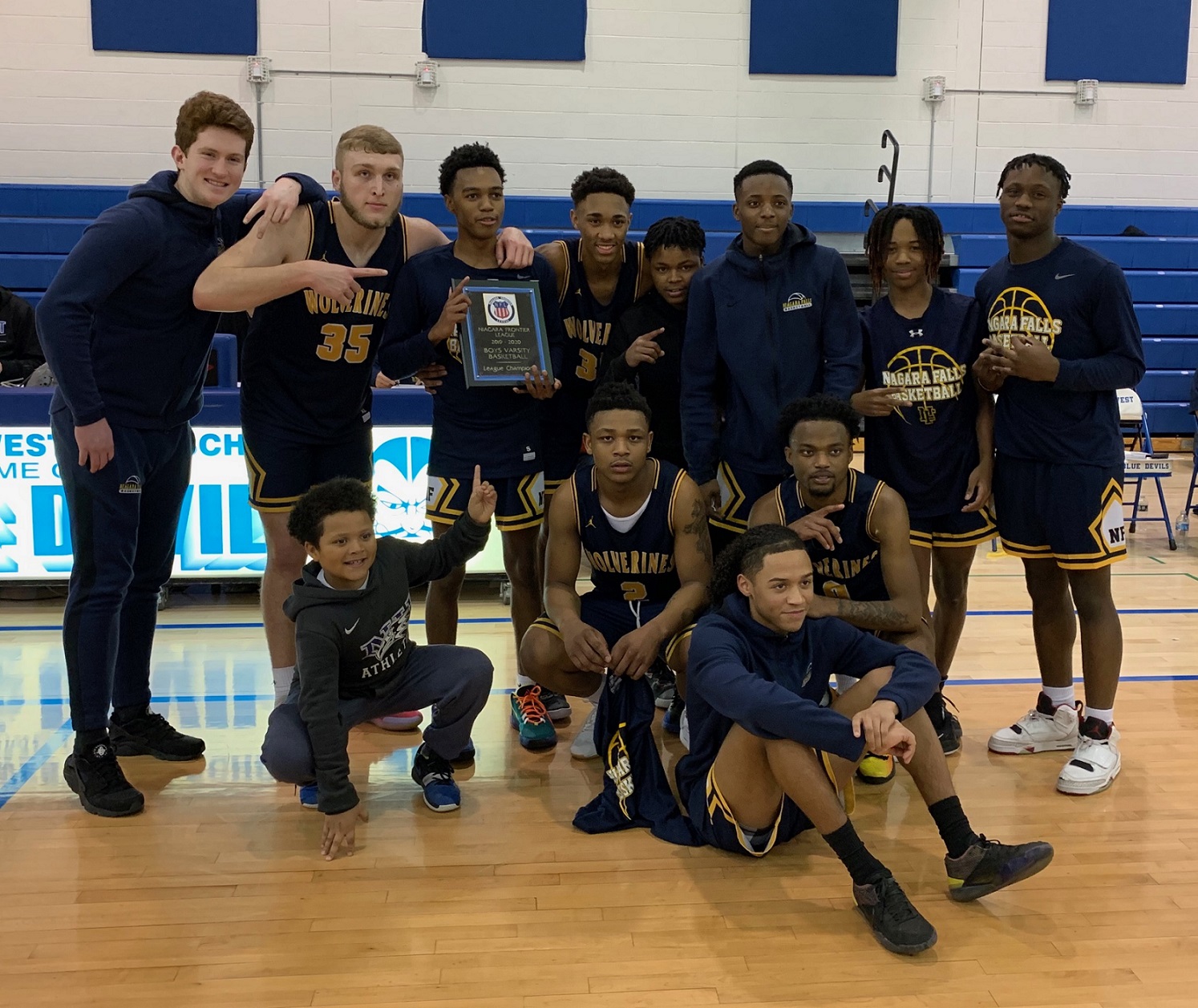 Championship is Wolverines 16th since 2000

The Falls win was one of revenge, as the Lancers were crowned NFL champs for the first time in 34 years last season.

The game had its fair share of superstar talent, as Niagara Falls’ Jaemon “Mookie” Turner and Lew-Port’s Roddy Gayle dueled all night. In addition, some unsung heroes were able to pull through for the Wolverines.

In the first, Falls got off to an 11-5 lead, but Gayle was quick to turn the Lancers’ luck around. The sophomore sensation went on an 8-2 run by himself, highlighted by an alley-oop dunk from Mehki Starks and then a powerful two-hand slam. The run tied things at 13.

Turner followed with his own 8-2 run, handing the Wolverines the lead, 21-16.

Gayle and Starks finished the quarter with two free throws apiece, and the Lancers trailed, 21-20, after one quarter.

In the second, Starks gave the Lancers a 22-21 lead – a lead that ended up as the Lancers’ last of the game.

The Falls answered with two Turner 3-pointers, in addition to treys from Aarien Robinson and Faybion Prather.

Gayle was able to keep the Lancers close, though, as he threw down another vicious one-hand dunk and added 10 second-quarter points. The Wolverines led at the half, though, 38-34.

In the second half, Lancers freshman Jalen Duff nailed an opening trey, but Robinson quickly nailed three 3-pointers and, in addition to a Turner 2-point bucket, the Falls went on an 11-3 run to lead 49-40.

Possibly overlooked in the points category were sophomore Dominic McKenzie and junior Caleb Tillman were huge all night. With no Taylor Sanders or Bryce Smith for the Wolverines, the young forwards cleaned up on the rebounds and gave the Wolverines second chances all night long. The duo finished with eight and seven points, respectively.

The Lancers kept things close in the final eight minutes, cutting it as tight as two points. Treys from Duff (two), Bobby Beilein and Jack Bernstein cut the Wolverines lead to 67-65.

The win gave Niagara Falls its 16th NFL crown since the new high school opened in 2000.

For the Lancers, Gayle led the way with 29 points, including 23 in the first half, while Duff had 14 and Starks scored nine.

Lew-Port coach Matt Bradshaw was visibly disappointed following an unsuccessful attempt to collect back-to-back NFL titles, but credited the Wolverines and their play.

“You gotta give them all the credit in the world,” Bradshaw said. “I think with them losing some of their players, we were the favorite to win and they came out with a purpose. They just outworked us; that’s the bottom line. … They did not back down and had that next man up mentality and they deserved to win.”

Bradshaw’s bunch was outrebounded Wednesday night, as Tillman and McKenzie played a role in the stat, but the coach said rebounding all comes from effort.

“We get outrebounded almost every game. Rebounding is effort. They read all their stats and read all this, read all that, but rebounding is important. All five guys need to rebound. … They, Niagara Falls, wanted to rebound in the second half and I have to say they got majority of their points on second and third chances. … They outworked us,” Bradshaw said.

For the Wolverines, Turner led with 28, including 21 in the first half, while Robinson scored 16 and Prather added 12.

Wolverines coach Brent Gadacz said he was proud of his team after losing some players to have a next man up attitude and added he’s confident in every play on his roster.

Gadacz praised Tillman, and said the junior forward has been through a lot of late.

“Caleb Tillman was in the hospital with a staph infection and had a tube in his neck draining an infection out his neck. He had to sit at home for six days. He got cleared today, just in time,” Gadacz said. “He had a growth in his neck (that) looked the size of a golf ball. … Thanks to our nurse practitioner, they sent him their (Buffalo General Hospital), got him and got him the help he needed … then came back. … Caleb came off the bench today and got the job done.”

Of winning the NFL title after a one-year lull, and Gadacz’s first as varsity head coach, he said it’s a feat the team had on its mind since day one.

“I said out first goal is to try and win the NFL title and get that back,” he said. “I’m not a fan of the system. Even if we lost today, we would’ve had the best record, but I get it. We had two divisions.”

In addition, Gadacz praised McKenzie for his efforts guarding Gayle, who he called “one of the best player in Western New York.”

“Thank God there’s a ton of videos on Roddy all over the internet and social media, so I can look at his tendencies and see what they are. And I watched film after film and we figured out a couple things he has to work on, and Dominic did a tremendous job. … He did one hell of a job,” Gadacz said.

Both teams now head to the Section VI playoffs, as the Lancers (Class A-1) and Wolverines (AA) look to defend their titles.