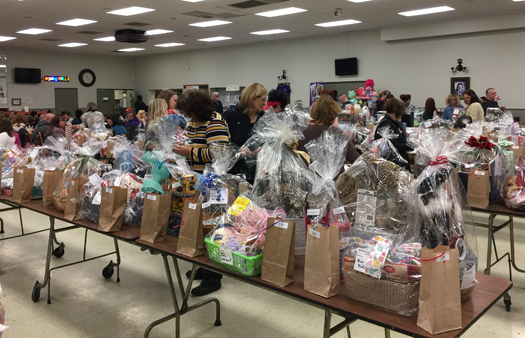 A quick Google search will show the word “empower” means to give someone the authority or power to do something; or make (someone) stronger and more confident, especially in controlling their life and claiming their rights. Similar words of both definition, from that same search include: authorize, emancipate, unshackle and permit. Bearing this in mind might explain why United Cerebral Palsy Association of Niagara County Inc. took it on as its nomenclature and became Empower in 2015.

With proceeds benefiting its programming, Empower is holding its annual “Snowflake Basket Auction” for the 11th year in a row to continue to “empower” its clients.

“The reason it’s called ‘Snowflake’ is because one of our employees, Russ Palvino, who works in our community housing division … he makes snowflake cookies and homemade fudge for the event,” said Elizabeth Cardamone, director of communications and development at Empower. “That’s where the event got its name.”

The event features over 250 themed baskets being auctioned off, as well as premium items and gift certificates people can buy tickets to win. Baskets and prizes include “A bucket of booze,” “Casino night,” “A chest full of toys,” and even two tickets to Disney – which will be auctioned off in a silent auction. All of this takes place from 4-8 p.m. Friday, March 27; and noon to 5 p.m. Saturday, March 28, at Volare Lodge at 56th & Kies.

The “Snowflake Basket Auction” is important to Empower because it buys things that are not typically reimbursed by the government.

Cardamone said, “Like an awning for one of our homes, so that the residents can be outside in the shade when it’s hot out. Or different themed parties, so they can get out in the community and enjoy themselves. These are just some of the examples that we do.”

The agency has come a long way in its evolution. In 1954, the UCPA of Niagara County started as a school and health care provider for children with cerebral policy. By 1960, it introduced a half-day preschool program for children with cerebral palsy and other developmental disabilities. Today, the program is called the Empower Children’s Academy and more than 100 children receive not only preschool education, but also clinical services, early intervention, and home-based therapy, and that is regardless of any disability status.

And Empower helps adults, too. In 1961, the Hand Cap Group, a group of persons with disabilities, was founded. It received contract work from companies in the area. Since that time, vocational training, adult education, and other services like day habilitation, have been added to the list of programs Empower offers.

In terms of housing options, Cardamone said, “There are homes, but there are also supports for people who live in the community … who live with their families. We have staff that go in and look after the person while the family member gets a break.”

Cardamone said the work at Empower is very rewarding, maybe not in terms of dollars and cents, but in the relationships formed and goals achieved.

“I’ve been working for the agency for four years,” she said. “The average staff tenure here is nine years, and the reason people stay is not because of the pay. Although Empower is very generous, as generous as it can be – it being an agency that pays its staff through government reimbursement – but the reason people stay is because of the relationships that they form, mainly with people with intellectual or developmental disabilities.

“So, especially when someone thinks that, because of their disability, that they can’t do something, helping them figure out what their interests are and then develop that into a plan that they can make choices about and pursue is very rewarding.”

Cardamone gave an example of one of their clients, Anthony, who wants to open a coffee shop – a café that employs people with disabilities. The team at Empower is helping him realize his dream.

“We sent him to Leadership Niagara, a yearlong leadership development program,” she said. “He was the first person with an intellectual or developmental disability to go through that program. Now we have a grant – I’m the grant writer for the organization, too – and I got a grant from Verizon to purchase a coffee cart. Anthony and other workers are going to go out into the community. At first, they’re going to be at the Fashion Outlets of Niagara Falls and they’re going to be serving coffee in the newer portion of the mall to shoppers. They’re going to be learning on-the-job skills. Then, hopefully, Anthony can decide whether or not he wants to pursue this dream of opening a coffee shop and he’ll have the leadership skills and the on-the-job experience to really know if that’s something that he still wants to pursue.”

Cardamone also noted many of Empower’s clients will attend the “Snowflake Basket Auction.”

“A lot of the people we support go and they use their money if they want to buy tickets for different things,” she said. “A lot of them win baskets or whatever, but it’s a nice event, because they get to come and interact with anybody else that’s coming, too.”

More information can be found at www.empower-wny.org.