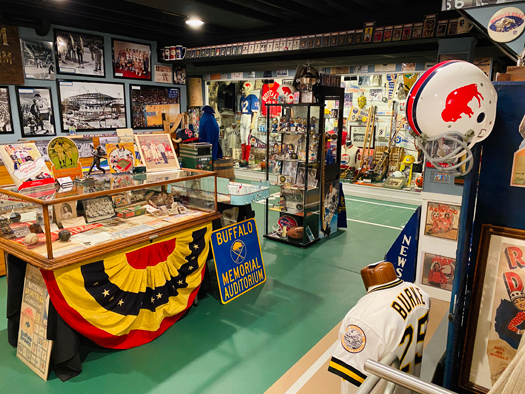 John Boutet of Grand Island has the largest Buffalo sports memorabilia collection in the area and with the help of friend and handyman Bill Gworek Jr. converted his entire basement into a museum. (Photo courtesy of John Boutet Collection)

It’s safe to say there are many basements in homes throughout Grand Island with “man caves” – that getaway space with a large-screen television, a fridge full of beer, pool tables and other games, sports photos and autographed jerseys hanging on the walls.

It’s also safe to say there is only one 1,000-square-foot basement on the Island referred to as “The Buffalo Sports Museum” and, after a tour, the name is perfect and it is a space any museum curator would be proud of. A countless number of Buffalo sports memorabilia meticulously fill every inch of the walls, ceiling and floor in the basement of John Boutet, sports archivist, author, athlete and a member of the Greater Buffalo Sports Hall of Fame Board of Directors and the BFLO Experience, which is looking for a large downtown space to house the Buffalo sports, broadcasters and music halls of fame.

Many of Boutet’s thousands of pieces of sports memorabilia are captured in his recent publication, “Buffalo’s Got the Spirit: Growing up a Crazy Buffalo Sports Collector.” The book is available online at www.buffalosgotthespirit.com and he will be signing books at the Grand Island Memorial Library, 1715 Bedell Road, on March 5 at 6 p.m.

While his 330-page book contains many words around hundreds of photos, Boutet is the first to admit he is not a writer.

“I am a storyteller,” he says with pride as he takes you through the museum, which literally could take weeks if he spoke about every item on display. The abbreviated tour is still lengthy but time flies because his stories and each item bring back so many memories for those of us who grew up in Western New York and followed local sports.

Being a history buff, the physical education teacher at Niagara-Wheatfield’s West Street Elementary School is extremely fond of his collection of items from professional baseball in Buffalo in the late 1800s through the turn of the century. It’s reflected by an authentic glove and bat, several team and individual player photos and an authentic Buffalo Niagara’s baseball team jersey.

Once you open the door to enter the museum, you are greeted with the late Larry Owen’s (aka ‘The Peanut Man”) sign from the Aud with prices for his peanuts – “Plain, Salted or Cajun – 2 for $5.00.” After a long trip down only a few stairs with memorable photos and “stuff” surrounding you, the wall to your right in the actual museum has an old wooden War Memorial Stadium sign with peeling paint and James D. Griffin listed as mayor that Boutet picked from the garbage. There is “The Aud” spelled out on a large piece of the official basketball court that the Braves and college teams played on in Memorial Auditorium and in front of that is a directional sign for War Memorial Stadium and an old gray stadium seat from when they knocked down The Old Rockpile.

“I also love the old Buffalo Bisons hockey team, which began playing in 1928 in the old barn in Fort Erie, Ontario, before they built the Aud in 1940 and the Bisons moved in and joined the American Hockey League,” he said as he showed off sticks, pucks and jerseys from that era. He has two gold seats from the old Aud and on the seat are four magazine covers featuring Punch Imlach; Gilbert Perreault, Ken and Dave Dryden and The French Connection. It is an impressive display.

Boutet and his bride, Susannah, built the house in 2015 and two years later John and two friends built the museum, which includes a long glass-enclosed display along the western wall of the museum. The collection also contains items from Buffalo’s past, including a newspaper corner of an old Buffalo Courier-Express wagon, mailbox and a Buffalo News apron that was used years ago when they sold the paper on street corners.

“Awesome, amazing, incredible, endlessly interesting and full of surprises. These were all reactions I had when I had a chance to visit John’s collection. Each object and each photograph brought a flood of memories; each confirms just how important sports have been in shaping what it means to be a Buffalonian. Western New York owes John Boutet a huge debt of gratitude for building and preserving this wonderful collection,” said Jim Overfield, a retired University of Vermont history professor who will release his book, “The Seasons of Buffalo Baseball” in April as an update and revision of his dad, Joseph M. Overfield’s “100 Seasons of Buffalo Baseball” book that was published in 1985. Several of Boutet’s photos are in Overfield’s new book of which he wrote the forward.

Boutet is a native of Kenmore who excelled in baseball at St. Joseph’s Collegiate Institute and is a member of his alma mater’s Sports Hall of Fame. He also played baseball at Canisius College. Today, he loves to golf and is a regular at River Oaks Golf Club. He also is the archivist for the Buffalo Bisons and curator of its Hall of Fame room, located on the main concourse. Throughout the season, Boutet’s personal collection is used during the themed displays he presents.

Like many of us, he began collecting packs of gum cards of sports stars. “We used to rip open the packs and we couldn’t wait to see what cards were inside,” he recalled. “We saved them all and eventually put them in shoe boxes to save because we just loved knowing we had the cards of so many great players.” After graduating from college, his collecting of sports and Buffalo items grew and obviously became more expensive but to him, it is a passion that he has now been able to transfer to his book.

“If this book brings back some memories for people, then I am happy,” Boutet said.