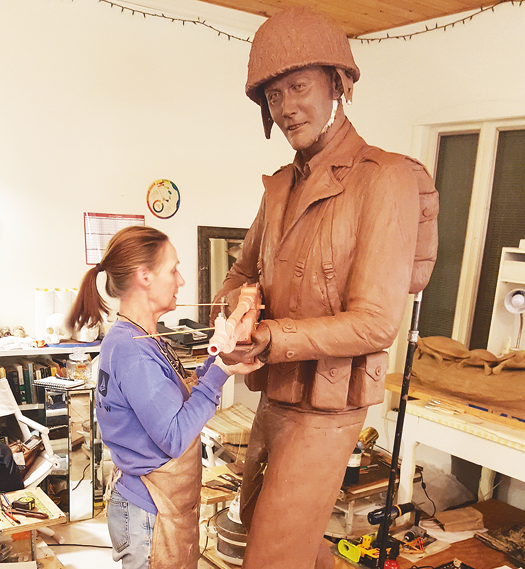 Susan Geissler works in her studio on the clay likeness of Charles DeGlopper that will be used to make the bronze statue destined to stand in DeGlopper Park at the intersection of Grand Island Boulevard and Baseline Road.

Youngstown sculptor Susan Geissler has approximately 60 or 70 hours of work left to do on the statue of Charles DeGlopper that will be unveiled in June in the park that bears his name.

Geissler was commissioned by the DeGlopper Memorial Expansion Committee to make the statue of DeGlopper that will be a focal point of the new DeGlopper Park at the intersection of Grand Island Boulevard and Baseline Road. Work is ongoing on the park and money is still being raised to honor Grand Island soldiers who died in wartime, including DeGlopper, who received the Medal of Honor posthumously for his actions in France in 1944.

Members of the DeGlopper Memorial Expansion Committee, including Ray DeGlopper, Charles’ nephew, visited Geissler’s studio last Friday to view the clay likeness before it gets shipped out to be cast and then bronzed. Plans are that in June on the anniversary of DeGlopper’s death in the D-Day invasion the bronze statue will be unveiled.

Peter Henderson of Susan Geissler Studio said Geissler is “getting down to the fine tuning of the project.” Geissler said one of the fine touches will be the facial expression.

“I want to make him look determined,” she said.

Henderson will then drive the clay statue to Colorado (“1,554 miles from that front door,” Henderson said, followed by “13 easy steps from clay to bronze.”) That process takes three months. 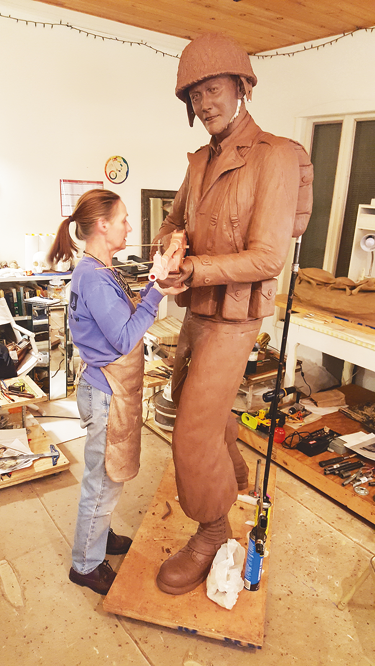