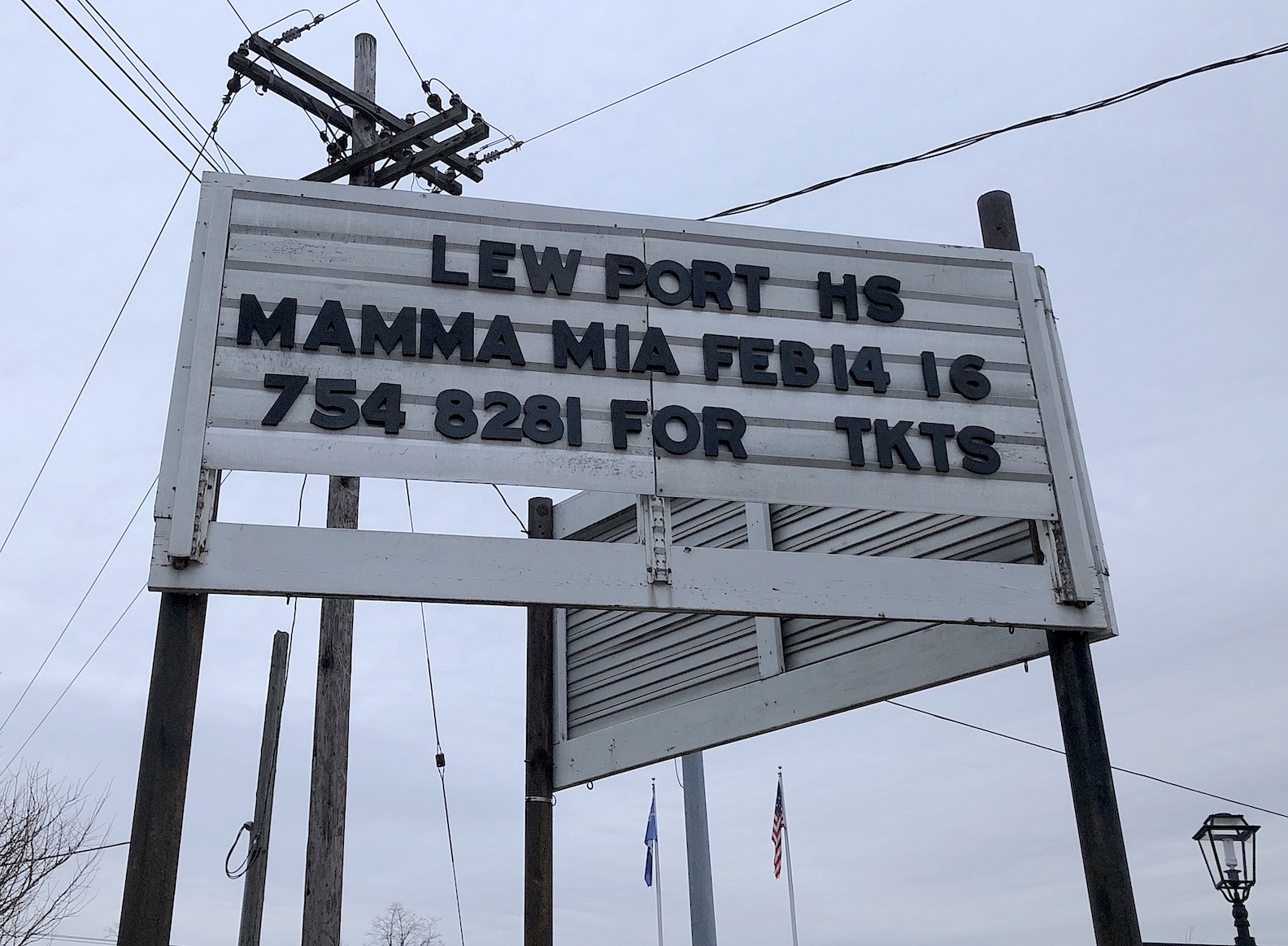 One of the existing events sign sides at Center Street and Portage Road is missing panels. Letters also are in short supply.

The Village of Lewiston Board of Trustees is taking a step back from pursuing a digital sign for the corner of Center Street and Portage Road.

It was recently suggested a mechanical marker could replace the existing old-fashioned sign, which is in dire straits.

Mayor Anne Welch said she will create a task force to study what’s best for the village.

“I think we probably need to get a small committee together and really just sit down with the chamber, with Artpark, our board members, and just try and figure out exactly what we need there – if we need one at all.”

Department of Public Works Superintendent Larry Wills said he’s waiting to hear back on three quote requests. He expected a digital sign would cost somewhere in the neighborhood of $40,000. That price includes setup, as well as the ability to change messages electronically – something that would likely happen in the clerk’s office.

Messages would have to be static, as LED signs with moving lights are prohibited by municipal law.

“Maybe we just take the sign down and deal without?” Welch asked the board.

Trustee Claudia Marasco acknowledged the Town of Lewiston has a digital sign, but asked, “Do we really need to have a sign?” at this village street corner.

“If we look into it, I think there should be an ad-hoc committee that would study it and do something about (ensuring the safety of passersby),” she said.

“I think we should literally pump the brakes a little bit and maybe not go too much further with this without some discussion,” Marasco added.

Historical Preservation Commission Chairwoman Loretta Frankovitch said, “We would be very interested in talking about this issue more. Just from informal discussions that I’ve had with people … there’s a lot of concern about the replacement of the sign.”

That said, she added, “Nobody likes the sign the way it is. We, I think, can agree on that. It probably should be either replaced or gotten rid of.”

Marasco said she walked over to study the existing white sign, which uses hand-placed black letters.

“I went and I looked, and it’s all kind of falling apart,” she said. “It’s supported by three metal columns, and it’s such a dangerous area to begin with. And, unless you’re at the (traffic) light, which you could maybe look up there, otherwise it’s a tough place when you’re driving – between the ice rink, all the festivals; we have parking there; people backing out; people crossing the street to go over to the restaurant. And as a daily walker … I don’t look at that sign at all. … Because it’s so high up and it’s so distracting, I think it’s actually a safety hazard.”

She added, “It’s really outdated. It doesn’t really serve its purpose. Everybody’s into looking at the events on their social media or they’re reading it in The Sentinel, or they see it on TV. I don’t really know that it’s something that’s all that important anymore.”

Trustee Nick Conde said, “Maybe it won’t even affect anybody,” if the DPW removes the sign and a replacement is not immediately installed.

Wills said, “I’m not for the digital sign; I’m not for keeping what we have. Sign or no sign, we haven’t even gotten that far yet. It’s just conversation.

He added, “It’s falling apart; I’m losing the letters; and it’s so bad to where it either has to come down altogether, or replace a sign. It’s all up for conversation right now.”

Marasco said, “I know that the guys (from the DPW) who had to change that sign did not think it was at all safe” to climb a 12-foot letter and change letters. “The ground is not even. You have wind; we have elements to deal with.” 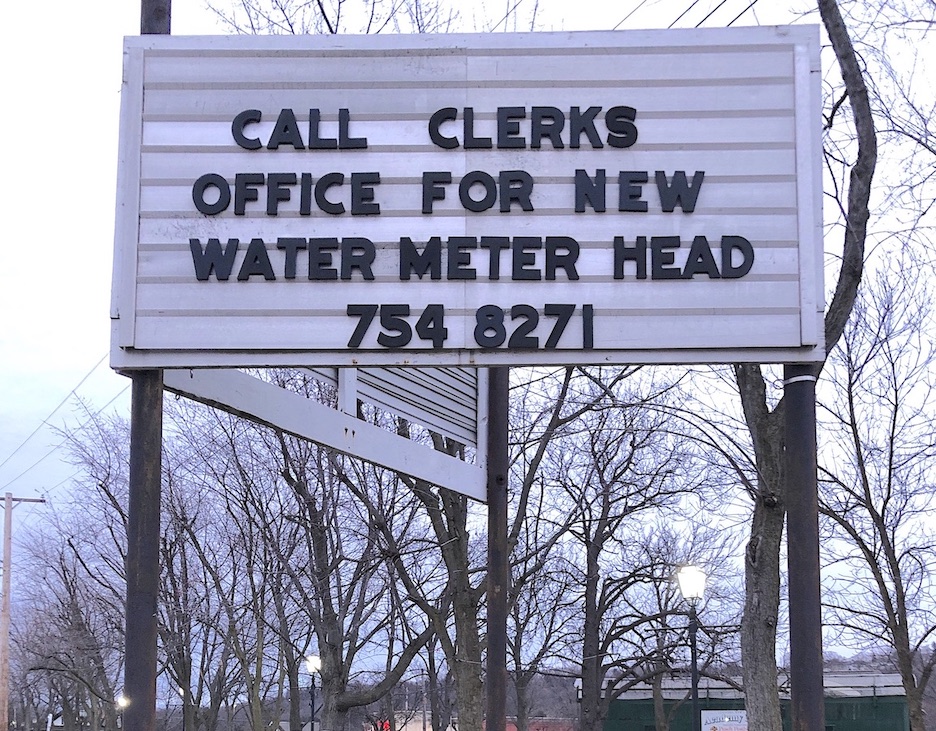 Local groups like to use the sign poles to hang up banners promoting events. The Village of Lewiston also uses the message board to announce community news.

Welch said the sign posts are used by organizations such as the Kiwanis Club, Artpark & Company and the Niagara River Region Chamber of Commerce to promote upcoming events.

“There’s different (groups) that like to put something up there for people to see, so we have to consider them also,” she said.

“Obviously, the sign we have is antiquated, so we need to look (for a replacement)," Welch said. “If we put a sign up, it will have to be a digital sign that the girls can program from the office, so nobody’s up the ladder anymore.”

Frankovitch said both signs – present and digital – are “extreme,” and “I would like to find something somewhere more in the middle that would suit the village; more of a historic nature. It could still advertise everything. It doesn’t need to be a 12-foot-high sign.

“East Aurora has a lower sign. It’s ground-level. It’s got some historic pediments on it. It looks decent – and they change it right from ground level. But it’s not digital, and it’s not taking away from the historic nature of the village.”

On Tuesday, Simonson, a community advocate and historian, emailed The Sentinel and said, “The current dilapidated sign should be replaced. While digital signs are convenient, we have to ask ourselves, ‘Is this the best way to welcome visitors to our historic district?’ Do we want to have a modern sign that detracts from the very essence of what makes Lewiston one of the most envied and quaint communities in the region?

“Little by little, we keep losing our edge and, before you know it, we’ll wake up one morning and ask, ‘Where did our history go? Why do we look like Transit Road?’ ”

As an alternative, Marasco said, “We could always hang some beautiful plants.”

Welch said, “We’re going to remove that sign, because he (Wills) can’t get parts for it anymore. That sign is coming down. So, whether we put another one up, or it’s digital, or whatever,” the existing sign will eventually be removed.