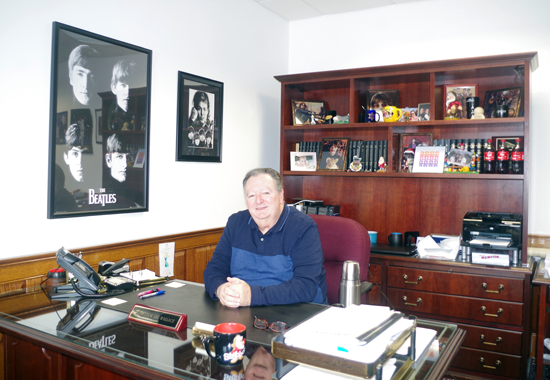 Town of Niagara Supervisor Wallace sits down for interview with Tribune

In last year’s elections, Lee Wallace ran for his second term as supervisor in the Town of Niagara unopposed by any candidates for the position. The hometown politician, who said he never wanted to be a politician, is now in his fifth year of working for the town as its head.

Raised in Belden Center, one of the oldest neighborhoods in Niagara, Wallace held a variety of jobs and titles in the Niagara-Wheatfield community as a teacher and coach, not only at the high school, but also at NCCC where he earned the position of athletic director and worked as a professor. He also noted he is the oldest employee currently working for the town.

“My wife will tell you she’s the oldest employee in town. She’s not, I am,” Wallace said. “I started in 1969 as a summer rec employee, then worked my way up to recreation director in, I believe, 1984. That’s basically a part-time job, but still.”

For his achievements he’s been inducted into both the Niagara-Wheatfield Hall of Fame and NCCC’s Hall of Fame. He retired from both and now delivers all his energy into making sure the Town of Niagara continues to be a good place to live, work, and raise a family.

“We need to attract a wider variety of age demographics,” Wallace said. “We’re a very old town, and I mean old in the sense of the age of residents. I think we’ve over 60% (made up of those) age 60 and older. It makes it tough to draw in younger families, but at the same point at what cost?”

Wallace talked about a few prominent projects including the Bri Estates development, which is on hold until the developer can answer the questions in a scoping document fueled by citizen input; the Weber property, a project the town has partnered with Buffalo-Niagara Waterkeeper to keep flooding down in Cayuga Village and Tuscarora Road, and create a natural habitat people can walk through; and the former Army site the town sold to Reger LLC last year in accordance to federal regulations, which forbade any profit being made from the sale.

“For people who cry that they sold it for nothing, our goal was to get it back on the tax map,” Wallace explained. “Hopefully somebody will make something on it and develop it. It’s a win-win for us.”

Not everything is a win-win. The job of weighing the impact of developments on the community with the rights of property owners can make any elected official feel quite helpless.

“Legally, we could leave ourselves open for litigation,” Wallace explained. “We’ve been fortunate that it hasn’t (come to that) but it has happened in other towns. You have to be cognizant of that.”

So, what is a board and its supervisor to do? The answer: change what you can.

“My goal is to try and rid our town, especially our main corridor, which is Military Road, of as many of the eyesores as we can. Things that have been left vacant, empty for a long time,” Wallace said. “Let’s start with that little strip mall at the end of Grauer. We went after (them), we had the money and we’re in the final stages. I’m hopeful that that will start coming down in February.”

“Before the fire, the school (on Military) was a problem,” he continued. “It’s been sitting vacant for over 25 years. We have been working hand-in-hand – prior to the fire and post-fire – with the owner. … He’s kept his taxes up, he’s kept everything up that he could do, he’s done everything he’s supposed to. There was no legal way for us to go after him, and then, of course, the fire hit.”

Wallace said, “There is a plan in place, although it’s a concept plan. … He’s going to have to knock it down, which he’s aware of. The price tag to knock the building down is $400,000. He’s trying to get state monies and brownfield monies to help knock that building down because (otherwise) that would destroy any profit margins of anything he’d try to do there. That’s why this has taken a little bit longer than we hoped. He should be coming in February to give us an update on where that is. His plan is, and still is, to build a facility there for independent living for seniors. The last I talked to him, that was his plan.”

“Moving further down along, we have Kmart,” he continued. “There’s been people that have expressed an interest, but it’s such a massive property that the majority of people who are interested in it would probably subdivide it. They’ll probably take sections of it and subdivide it out. Maybe there’ll be a restaurant in this section, and then something here, something there, but nothing is etched in stone in there yet.”

“The next one is Speedway, which is a little bit contentious. We’re waiting on a traffic study, we won’t make a decision until we see what the DOT’s regulations are,” Wallace said. “We have some other things in the works, some talk in the works about the old bank in the Big Lots plaza that’s sitting out front. … There’s some talk about other bank in the Wegmans plaza. … There’s some talk about the Valero station on the corner of (Route) 31 and Military Road, but none of these things are like at the level that the Speedway is right now.”

Other aspects of the job can bring surprises, as well. In February, Wallace said the town would be requesting an additional $600,000 to finish Phase Two of the Veterans’ Memorial Park project.

“We had some of the money two years ago, but when we switched engineering firms we’ve reevaluated and we find we’re a bit light on the project costs,” he said. “We’ve got to go back to Greenway and get additional funding.”

Wallace said that costs of living also rise, but he is dedicated to make additional increases small and bearable.

“When the City of Niagara Falls Water Board raises our rates and the county raises our rates, we have to pass them along,” he said. “The only way to make up that difference is to take it out of the fund balance and that’s not fiscally responsible. If you keep doing that, the best way to describe that is you can’t make your monthly bills at home, so you take it out of your bank account. Eventually, your bank account’s going to be broke. You really have to pass along small increases to keep up with the demand that we’re getting placed on us. These aren’t things we’re doing just to stockpile money, because we don’t do that.”

At the end of the day, Wallace said he and the residents are proud of their town. Houses on the market are 20% higher than the asking price and there are not a lot of homes for sale.

“We’re going in the right direction, we’re doing the right things, we’re making the progress that we need to make but it’s slow,” Wallace said. “It takes time. I’m hoping in my next term that there’ll be some changes that will be noticeable. We already got the Tim Hortons; we already got the Dollar General, two things that weren’t here before. I’m hopeful that things will move in that direction, so that the town can be proud of, not that we’re not, but we can be proud of where we’re moving toward.”

“I never in my whole life thought I’d get into politics. It’s just something I wasn’t interested in, because sometimes it can be difficult,” he said. “I said some really silly things when I first ran. It was really silly. I said,’ I’d never be a politician,’ and I really don’t consider myself one, but you have to play that game. You have to play politics. It’s part of it. There’s no way around it. I try to balance out and be fair to everybody. I’m fair to both sides, and all sides, and all residents.”

“We’re hoping that the decisions we come to are the right decisions and aren’t based on personal bias or an agenda, of which I can tell you, I have none.”