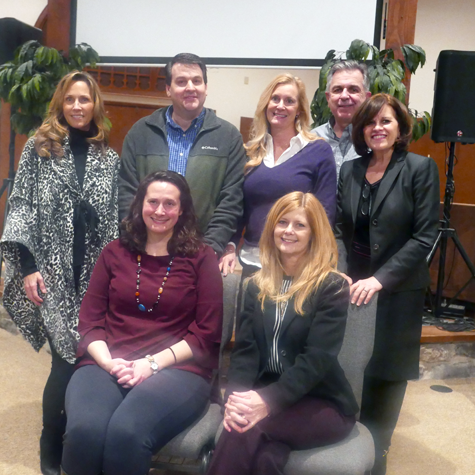 Speakers at a January seminar, as members of a group that has worked on establishing a Family Justice Center satellite, are (seated, from left) Jessica Mazgaj of Trinity Church's Missions Committee and Lauri Wierzbicki, and (standing, from left) Laura Mason, Pastor Kevin Slough, Karen Panzarella, Mark Wierzbicki, and Mary Travers Murphy.

A former parsonage at Trinity United Methodist Church will serve as the permanent home of the Grand Island satellite of the Family Justice Center, announced the center’s executive director, Mary Travers Murphy, on Jan. 9 at a community meeting at the church.

A parsonage at Trinity United Methodist Church became available after the church’s youth director moved to Florida. Kate Fonte, who became the new youth director, indicated that she did not want the house. The Rev. Kevin Slough, who had become pastor of Trinity in August of 2018 and chaplain of the Buffalo Launch Club not long afterward, said that he became aware of the Family Justice Center a year ago. Slough was at the Launch Club when he mentioned the empty house to (Launch Club member) John Tommasulo. “The moment I said that, he asked Laura Mason to come over and she started talking to me,” Slough said.

“I began to reflect on leading this congregation in an understanding that God has blessed us with two church buildings, two parsonages, and that even though we’ve typically offset a staff person’s salary with the second parsonage, that perhaps, we can reach out and bless the community,” Slough said.

Slough said that one factor that was very concerning to him was the increase in the number of deaths as a result of domestic violence. In 2019, in Erie County, 19 persons died as a direct result of domestic violence. “That was a jump from previous years of an average of only eight to 10 deaths. So the thing that our mission and outreach committee thought and prayed over pretty hard is the urgency of it, that there seems to be a progression of this going on, and it’s not getting any better,” Slough said.

According to Travers Murphy, domestic violence affects one in three girls and women between the ages of 15 and 24, one in four women aged 25 and over, and one in seven boys and men.

Speakers at the event discussed their personal experiences of domestic violence. Panzarella, an associate professor of physical therapy at D’Youville College, had invited Travers Murphy to speak to her students. “I wanted them to be informed as physical therapy providers and to help their patients. When she came to talk, I thought, she is talking about what I went through. I had no idea that I was a survivor,” Panzarella said.

Island resident Laura Mason, a nurse practitioner and an adjunct professor at D’Youville College, said, “I never thought that I would be that woman. A woman who isolated herself from family, friends and colleagues. I felt like a horrible mother, and I hated myself. I believed the terrible things (the abuser) said about me.”

Mason talked about her fears that her “dirty little secret” would be exposed. After a violent incident that caused her to fear for her life, she called the Erie County Sheriff’s Office. The next day, she went to Grand Island Town Court. “This was a very public forum. A high school friend approached me, asking me why I was there. I stuttered, and I couldn’t answer. Right at that moment, the judge came to the bench, and my heart sank even more when I discovered that the judge was a close family friend of ours. Almost simultaneously, my abuser was being brought in handcuffs and wearing an orange jumpsuit. I stood there, embarrassed, mortified, and, again, ashamed. When all was said and done, I left court that evening with a restraining order and my abuser was mandated to anger management classes.”

Mason said that she never called law enforcement again. Help came to her in a different way when she joined Al Anon. “I realized that I couldn’t continue this secret life. I had to do something. I felt comfort as I worked the steps. It was then that I realized that it wasn’t me. It was him. This was a very interesting revelation for me. I certainly wasn’t to blame. And then, I left him for good,” she said.

One domestic violence victim who never left was 22-year old Rachael Wierzbicki. She was shot to death on Nov. 27, 2018. “My daughter went from one domestic abusive relationship to the next,” said Rachael’s mother, Lauri.

In June 2018, Rachael called her parents for help. The man with whom she was living had violently attacked her. Lauri said that this was the third time that such an attack took place. “My poor daughter had choke marks on her neck. She had black eyes and broken teeth. She had bruises all over her arms. We went to the Family Justice Center and she went into one of the beautiful rooms. We started the process for the restraining order. We moved her back home. Life was great again. She was in a good place. Two days later, on a Saturday night, she met the man who would eventually terminate her life.”

In Rachael’s memory, Lauri and Mark Wierzbicki founded a nonprofit organization called the Rachael Warrior Foundation that raises awareness of domestic violence and that provides support for victims of domestic violence. The foundation is currently planning a fundraising gala, to be held from 7 to 11 p.m., Feb. 9, at the Hotel Henry Urban Resort, 444 Forest Ave., Buffalo. According to Mark, “We are just a couple of parents who got pulled into this. I know that this facility is going to be a blessing to the community.”

Mason said that having a Family Justice Center satellite on Grand Island would have made a big difference for her. “Now let’s imagine if, at that time, there was a Family Justice Center in the Town of Grand Island or if there was a collaboration of services, privacy, safety, and child care, provided in a safe environment with loving, caring professionals. I believe that I would not have entered the door of a public humiliation and embarrassment system. I would not have had to stand before a judge with my abuser. I would not have been made to feel that this was an anger management issue. I had felt hopeful that my abuser, having gone through anger management classes, would have made it all okay. I may not have felt responsible. I may not have gone back.”

Slough said, of the church’s decision to host the Family Justice Center’s future home on the grounds of Trinity United Methodist church, “One of the things that United Methodists believe and practice, even in our membership vows, is that we will resist evil and injustice in whatever form it presents itself. One of the ways is to offer this second parsonage to resist all of that, to offer a place where those who are living in domestic violence know that there is life after domestic violence and their abuser, that it is not their fault, and that there is a community in an ecumenical, joint effort that is behind them to help them and to offer them release from the individual who is holding them captive.”

Panzarella, who said that the center is looking for individuals and groups to volunteer and to adopt rooms, said that she anticipates a June grand opening for the Family Justice Center’s newest satellite. For more information about adopting a room, contact Marcey Bryant, the Family Justice Center’s specialist in marketing, fundraising, and events, at [email protected] or at 716-558-5295. 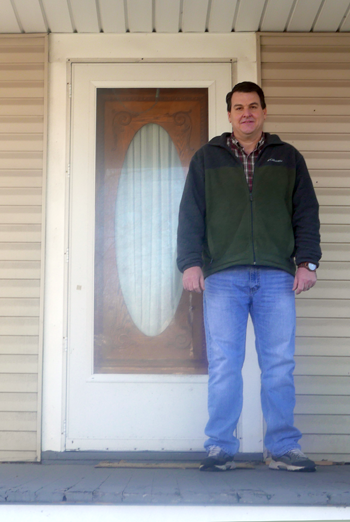 Kevin Slough, pastor of Trinity United Methodist Church, stands on the porch of the parsonage that has been donated to the Family Justice Center.