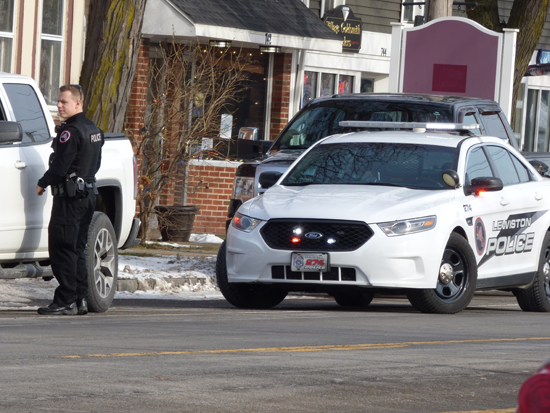 New York State Assemblyman Angelo Morinello on Wednesday said he supports the Village of Lewiston’s goal to lower the speed limit on Center Street to make the roadway more walkable. He contacted Niagara Frontier Publications to clear the air, in light of reports he received from Tuesday’s Board of Trustees meeting.

Morinello said, “I am going to work as hard as I can," to convince the New York State Department of Transportation to make the requested change.

Prior to the board meeting, an update was offered on efforts to lower the speed limit from 30 miles per hour to 25 mph. Center Street belongs to the New York State Department of Transportation, and the DOT has twice denied a request to shave 5 mph.

Lacking another option, the village had asked both Morinello and New York State Sen. Rob Ortt to sponsor legislation to change the speed limit.

But Deputy Mayor Vic Eydt told the board a “home rule” request wouldn’t pass the Assembly now, as it doesn’t have Morinello’s backing.

“If he won’t support it, it’s not going to go anywhere,” Eydt said, noting Morinello didn’t think a change was necessary.

Upon learning this, Morinello said, “I just don't understand that comment.”

He explained, "On Feb. 5 2019, I, as the sponsor, introduced bill No. A4661 to authorize the Village of Lewiston to reduce the speed limit on Center Street to 25 miles an hour. On 2-5-19, it was referred to transportation. On 6-5-19, the bill was held in transportation for consideration, as Center Street is a state road and DOT had not signed off on it. On 1-8-2020, the bill was again referred to transportation. It is still live in the Assembly. It's still here and I'm still working on it.”

Morinello noted part of the delay is because the DOT is waiting until the Ellicott Development plaza is built and opened – which is expected this spring. A second village request to the DOT asked for a traffic light at Eighth and Center streets to better accommodate what’s expected to be a large influx of vehicles.

A fatal accident occurred in the summer of 2014, when a pedestrian was struck and killed while traveling a Center Street crosswalk. Though the DOT acknowledged this incident, on two different occasions, its regional traffic engineer, Thomas Messana, wrote the Village of Lewiston to say a change in the speed limit isn’t warranted.

In a 2016 letter, Messana stated, “The 85th percentile speed and the 10-mile pace are the predominant factors in determining the appropriate speed limit, and in the case of Center Street, these both revealed that 30 mph is the correct speed limit.”

Morinello said, "When it comes to a state highway, the DOT needs to get involved. And at the time we asked them, there had been ... one fatality in 2014. They had no other information; and they didn't feel it was warranted to go through the study at that time. So now, what I'm going to try and do is work with them to include it in the study for the light. But they're not going to do the study for the light until the plaza is done, so they can see the traffic patterns.

“It's a long-term work in progress, but the bill is live."

A ”home rule” is a request by a local government for enactment of a special law.

Morinello said, "Home rule will not supersede DOT on a traffic matter."

He added, "I'm trying to (work with) DOT, but the problem is we just started the (legislative) session. It was just reintroduced, and we've been consumed with State of the State and the budget. Now that those are done, we can start focusing on other things."

Welch clarified her comments on Wednesday. She said, “(Morinello) did tell me that he wasn’t going to support it, but part of the reason was he wanted the DOT study, and we weren’t going to get a stoplight until they did that (study) after the plaza was built.”

She added, “The reasoning behind that is because he was waiting for the study.”

In an email to NFP on Wednesday, he wrote, “Ensuring that pedestrians can walk through the Village of Lewiston safely has its benefits from both a public safety and also an economic standpoint. We want to encourage residents and visitors to park their cars, travel Center Street by foot, and visit businesses with the peace of mind that they are able to do so in a safer manner. If the village believes that lowering the speed limit will help achieve this, then I support their efforts."