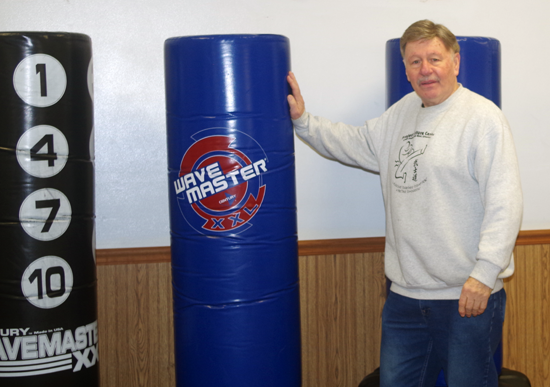 The Rev. Bob Heisner stands in the Project Future Center on Niagara Falls Boulevard in Wheatfield, which he bought 30 years ago by raising funds from "ordinary people."

Bob Heisner teaches Bushido at his building on Niagara Falls Blvd. He became proficient in the martial art through a blending of six different disciplines that he learned while serving in the military during and after the Vietnam War. He said the process of training doesn’t just help muscles, it stays with the student and gives the self-determination and will to become whatever it is they aspire to become.

While he gained much success in the early years of instructing, it wasn’t until he found God that Heisner truly began living up to his potential, he said.

“On the outward, people would say, ‘Well, that guy’s alright, he’s successful, you’re doing fine,’ ” Heisner said. “But St. Augustine said, ‘God shaped a void in all of us that can only be filled when we relate to our maker.’

Heisner decided to take his Christian faith and couple it with his ability in martial arts to make a real change in the world. To do this, he needed a permanent place to instruct men, women and children, at what he called Project Future Center.

“Over 30 years ago we bought this building,” he said. “We raised the money to buy the Project Future Center. People gave out of their hearts for a cause that they believed them. To this day, I am the steward of a vision that was given to me, but I owe responsibility to all the people.”

Some of those responsibilities are to teach martial arts in the correct manner, with correct motivation and instruction. Heisner laments that not all martial arts instructors are as true to this obligation as he is.

Heisner said the responsibility of black belts and people in general have is to make a difference, even it’s just by themselves. He also mentioned he does not accept any government help for his school, but also doesn’t turn anyone away who wants to train.

“We should be changing the world; we should be taking care of our communities; we should be reaching out,” he said. “But we sit back and wait for the government to do it and sometimes they don’t do a great job.”

Right on the wall, Heisner has written down the principles of what he expects from the youth he instructs.

“We take responsibility for our actions, take recognition of our talents and the need to serve our communities and make the world a better place. Have respect for all rightful authority; endeavor to live by the golden rule by treating others the way we would desire to be treated ourselves. Take a stand against drug abuse and needless violence; have the courage to practice our faith and live our convictions, ” Heisner read.

He also showed pictures of different groups he and his students have worked with, such as animal rescue, Operation Christmas Child, Casey House, the Kingdom Bound Festival and the Niagara Rescue Mission.

“When the kids are supporting and they’re paying for their tuition to train here and then we have an adjusted scale,” he said. “If someone doesn’t have the wherewithal, that’s fine. We can talk about scholarships. A scholarship doesn’t mean you get a free ride and do nothing. I can adjust that, but they’re going to work. They’re going to be cleaning toilets, they’re going to run the vacuum cleaner and do stuff that I did. Over in Japan, you were on your hands and knees, cleaning up the floor.”

“Through our center we offer a gambit of programs,” he said. “We offer an introductory programs to people who would like to learn. They can come in for an eight-week program, and they can learn a women’s self-defense program. I have one of my black belts that teaches that Sunday night. We have an introductory kickboxing exercise and fitness program for eight weeks; and we have an introductory traditional martial arts program for eight weeks that they can do. We also offer personal training for those who are real serious and want to get into the marital arts, and then we offer a gambit of community things, too. Like the Missionary Outreach Operation Christmas Child, we do that every year. We do outreach to ministries in the community. We partner with them.”

“We can do a lot more together than separate.”

More information on the Project Future Center can be found on its website: www.projectfuturecenter.com.