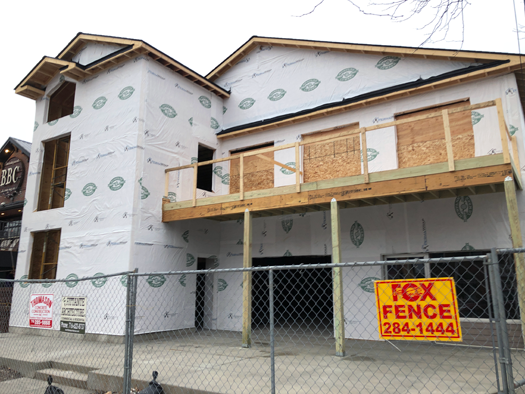 Two Lewiston businesses originally slated to become part of the renovated Fourth and Center streets complex are moving. The owners of Brewed and Bottled Craft Beer Shop and Sgt. Peppers Hot Sauces said the corner’s concept just wasn’t the right fit for them. As such, they’re headed to 442-444 Center, a property developed by attorney and Town of Lewiston Councilman Alfonso Marra Bax.

“We’re excited to move down there,” Brewed and Bottled owner Chris Budde said. “The only reason we didn’t stay in the plaza is we were having kind of a tough time making the space work. The new owners (led by Gallo proprietor Michael Hibbard), they were really trying to help us make it work. It was positive. It’s just we couldn’t make it work for the business.”

At the new site, Budde explained, “Our unit will be on the left side of the building. You’ll enter through the vestibule and then go into our space. And then we’ll have from the front straight to the back, and a nice outdoor seating area behind the building – which will be pretty cool. It’s gonna be like a little beer garden back there. You’ll have like a partial view of the Frontier House, which I think is exciting. And we’re going to make it a nice little green space out back there, where you can hang out.

“You’re still on Center, but you’re off Center. I’m pretty excited about that. It’s something that I’ve really wanted to do for a long time. It was always in the back of my mind to find a place eventually that we can have that backdoor space.

“There’s a beer shop in New York City that we go to and we visit. It’s called Covenhoven. They’ve got a nice little backyard space, and we really enjoyed hanging out there. It’s kind of a relaxing, quiet, intimate space.”

Brewed and Bottled and Sgt. Peppers have a symbiotic relationship. Neil Garfinkel, who is Budde’s father-in-law, operates the sauce, spiced goods and cheese emporium. He said it’s important the two businesses remain connected.

“We share a million customers, and if I move away from him – even though it would only be a few blocks – I’d probably lose out on a lot of sales. And we’re family; we work together,” Garfinkel said.

“Neil’s location will be situated facing the Frontier House on the backside of the building. So, you’ll literally be able to walk out of our beer garden, go right over and grab snacks from him, which is kind of cool,” Budde said. 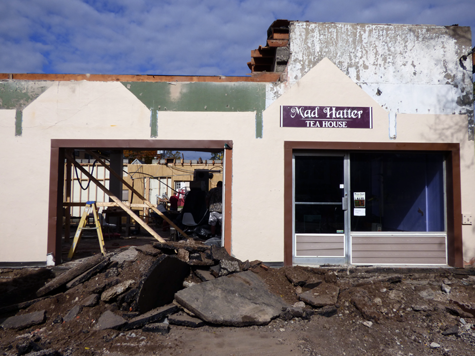 Though Budde sells beer, he likened Brewed and Bottled to a coffee shop.

His “beer café” is “more on the relaxing, chill side; people get together and just talk and enjoy each other; friends are made – definitely different than a traditional bar.”

Budde said he’s excited to have a “blank slate,” but, “We’re definitely going to keep the same vibe.”

Brewed and Bottled has grown in popularity since opening in 2016. As this writer went in for an interview on Tuesday, Budde was in the process of doling out almost 16 gallons of a rare batch of Trillium.

At the same time, Lewiston’s Brickyard Brewing Company has made a name for itself in the craft beer world with a unique assortment of handcrafted beverages.

“I’m good friends with all the folks over at Brickyard Brewing Company, especially John (Meteer), the brewer, and we’ve got ideas to collaborate together – and now that we’re literally next door to them, that opens that up.”

Brewed and Bottled’s last day at Fourth and Center is Sunday. Sgt. Peppers is expected to wrap up on Jan. 25.

Both Budde and Garfinkel said they hope to be back in business within a couple of months.

“The shorter the better, but if you’re going to be closed, this is the time to be closed,” Garfinkel said. “January, February, March are terrible.”

Bax’s property is coming together in a manner slightly different than what was pitched in a proposal accepted by the Village of Lewiston. Units have shifted left. Building Inspector Ken Candella said underground utilities prompted the modification, which was subsequently OK’d.

Budde said, “The progress on the building is going quite, quite quickly over there. They’ve got crews doing a great job, and they’re really, really getting it together quickly.

“Next steps are to meet with an architect, after we close. We’ll get the floor plan down. We’ll do all the appropriate paperwork and proceed from there.”

When Brewed and Bottled does reopen, Budde said the store will be more active at festivals.

Moreover, he promised his patrons can continue to find cans from Rochester’s Other Half Brewery.

The Sentinel has reached out to Bax for comment, but to no avail. 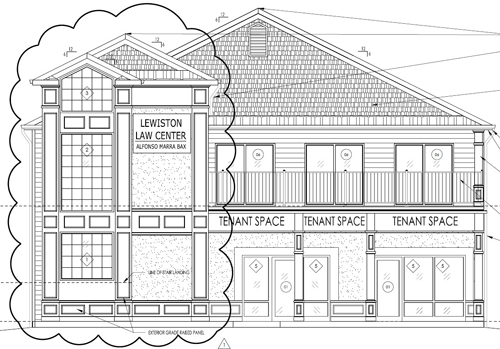 ... and what could be. (Graphic courtesy of Fittante Architecture)