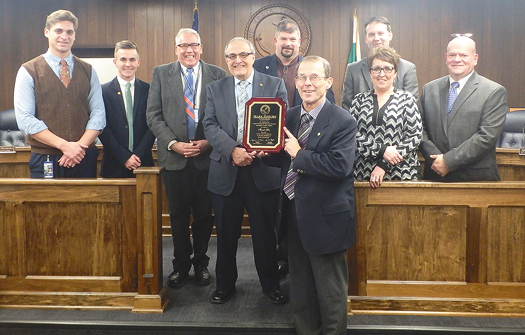 At the City of North Tonawanda reorganization meeting, board members paused to ask Mark Berube to come forward and accept a plaque for his service.

Berube had effectively tendered his resignation as 1st Ward alderman by not running for reelection this past November.

“All I can say is that I love the City of North Tonawanda,” Berube said. “It’s been a part of me for 40 years now. I appreciate everyone here, working with each and every one of you up here, and though I’m off the council and plan on doing other things, my work in NT isn’t over. I will be doing other things in the future, and all I can say is, thank you very much; I really feel honored.”

The former alderman received not just one plaque, but two, one from the Common Council and Mayor Arthur Pappas, and another from 8th District Niagara County Legislator Rick Andres.

“Mark has always been a great friend of the city. He’s the type of guy we look for in an alderman, a guy who dedicates himself when he’s not getting a paycheck. When he’s on the commissions, when he’s on the Cable Board and all the different things he’s been involved with for many years. That’s the type of person that leads this community and he does it selflessly and for all the right reasons.

Andres read, “And whereas the Niagara County Legislature is honored to recognize Mark Berube for many years of outstanding service and dedication to the residents of North Tonawanda. Whereas Mark Berube has served the City of North Tonawanda as alderman in the first ward and whose leadership and unique ability to forage positive partnerships is deserving of high praise and recognition, and whereas Mark Berube’s community involvement has been illustrated over the years with various projects such as assisting in the no-smoking ban for City Hall grounds, working with business leaders and city officials to spearhead the rejuvenation and grand opening of Brownie’s Sports Bar and Tavern, his efforts to expand the development of Oliver Street and River Road corridor and he was also very instrumental in the renovations of Matt’s Music on Oliver Street; whereas Mark Berube’s ongoing and tireless contributions to the citizens of North Tonawanda have earned him great respect, including constituent service, where he ensured no resident call went unanswered and in most cases resulted in personal visit to their address of issue; and it is resolve that the Niagara County Legislature appreciates and thanks Mark Berube for his dedicated public service as a North Tonawanda alderman and wishes him continued success, and happiness and good health in his future endeavors.”

Third Ward Alderman Eric told Berube, “It’s been a pleasure serving with you,” he said. “I want to say that you were definitely part of this council in a cooperative way, moving things forward. A lot of times there was some hard votes and you definitely did your due diligence and I wanted to thank you, and I know and hope this does not conclude your service to the city.”

“I do think that Eric did a fine job, but I’m all about changing it up,” Tylec said of Zadzilka. “I think that Donna has a great tone that would change the atmosphere in meetings, too.”

Zadzilka was voted in as common council president by Pecoraro, new First Ward Alderman Robert Schmigel and by himself. Braun voted for herself as did, Tylec.