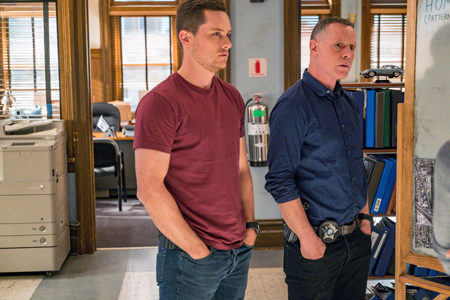 In the “Chicago P.D.” season premiere, Hank was a suspect in the fatal shooting of newly elected mayor Brian Kelton (John C. McGinley), and his team – Jay, in particular – was feeling the heat.

If we’re being honest, the police department, the intelligence unit – heck, even the TV audience believed Hank was capable of such action.

Though it was discovered he didn’t kill Kelton, Hank’s reputation for at-all-costs justice was hurting his squad’s standing among its peers. Job security was slowly ebbing away.

But it got worse.

Little did we know at that time, but Hank’s influence would rub off on Jay in a profound way just a few episodes later.

Desperate to find the man who killed a young boy – and armed with a false positive identification from facial-scanning tech – Jay accuses the wrong person. Hell-bent on finding answers, he throws Marcus West into lockup, where the accused is murdered.

This turn of events haunts Halstead, who takes it upon himself to look after the man’s widow and son. Using a fake name, “Jim,” Jay befriends Angela and Bobby.

Unbeknownst to him, she has stolen drugs from, well, folks who don’t look kindly on that type of thing. After a ball-bat to the brain, Jay awakes to find himself and Angela in the custody of said villains.

She begins to doubt herself, her ability to parent Bobby, and whether she pushed Marcus to commit a crime resulting in his death.

Angela’s uncertainty only fuels Jay’s guilt, forcing him to come clean: Marcus was innocent, and his demise was due to Halstead’s impatience.

Oh, she did not rejoice in that news.

As Angela pondered outing Jay’s badge to the baddies, Hank and co. stormed the castle to save their friend. As he returned to check on her, Angela revealed she was packing heat. Jay is shot, and … the midseason ends.

In the trailer, Hank is shown telling Angela she’s as good as buried if Jay doesn’t make it out of Chicago Med.

Should Jay survive, will Hank have a change of heart, and realize his aggressions are dangerous to the intelligence unit? And what about Halstead – does he learn he’s no Hank, and really realize the consequence of his actions?

BTS spoke with Soffer and Beghe at the recent #OneChicagoDay press event. ICYMI, here is what they said about the Jay-Hank situation: