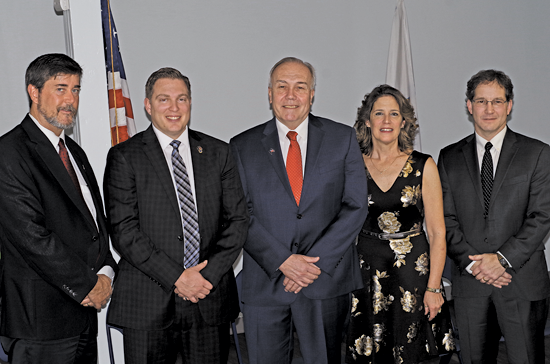 Grand Island government began the transition to a one-party Town Board with a New Year’s resolution to work toward town unity.

All five elected officials who were sworn in on New Year’s Day are Republicans, and the three new council members join two sitting councilmembers from the GOP. In a break from past practice, though, both opponents Whitney defeated in the general election, Jim Sharpe and Tom Franz, attended the ceremony.

“I’m trying to bring unity. That’s one of the things I really want to do,” Whitney said. “I’m keeping Jim Sharpe on the Long Range Planning Committee with the waterfront revitalization program. The projects that he’s been involved in, I’m going to seek his input.”

Whitney, who was Grand Island’s town engineer before retiring in 2017 after 31 years of work, said, “I’m trying to build bridges, and not the civil engineering term, the more metaphorical term.”

When he took office four years ago, outgoing town supervisor Nathan McMurray had complaints about the transition from the previous supervisor.

“I think Nathan still had Grand Island’s best interests at heart. But sometimes those approaches were not taken as well as he would have liked, I guess,” Whitney said. He added that the transition has “been good. I met with Jim (Sharpe, the deputy supervisor) on a few occasions. I met with Nathan once.” 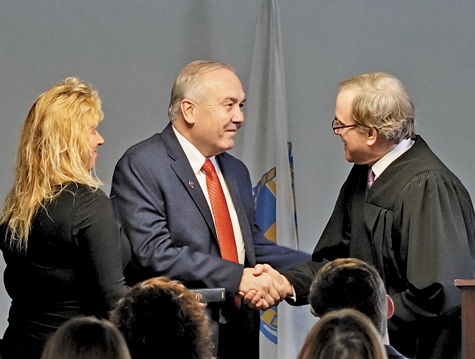 Though there were no inauguration speeches made at the ceremony, Whitney wrote a draft speech in which he expressed his honor at being elected and his commitment to unite the Island.

“I want to welcome all of the citizens of Grand Island to voice their opinions,” Whitney wrote. “My door will always be open, and I want to hear from you. Together, we can work to make Grand Island a better community for everyone.”

Karen Conboy served as master of ceremonies for the event, which was held in the newly improved community center in the Nike Base. Approximately 200 people attended the inauguration.

“I’d like to thank my family first for supporting me in running for town clerk,” said Pattie Frentzel, who was administered the oath of office by her husband, Town Justice Mark Frentzel. “My service means everything to me. I love Grand Island. I’m born and raised here and I can’t think of any other job that I would want to do in my life other than being the town clerk.”

Had there been speeches, Nemeth said he “would have thanked everybody throughout the campaign throughout the year. It was a long haul this year with the primary being so early. But it was nice to see everybody here from the whole community, and I appreciate that support.”

First-time candidate Digati, who received the most votes in the council race, said, “I would have said ‘Thank you’ to the voters and my family for the opportunity to serve the community that I love, and I’m looking forward to doing everything I can to protect our community.”

Digati called the turnout at the community center for the ceremony “Fantastic. And a great venue. This place looks great. No more storage cabinets and wasted space. So hopefully more to come.”

Digati said in the next four years he anticipates dealing with topics such as the Southpointe development and a possible Amazon location on the Island.

Madigan said after taking his oath of office for a second term on the council that he was “extremely grateful and appreciative of the voters that helped me make this happen. I just can’t thank the voters enough.”

The community center in the Nike Base that hosted the inauguration ceremony for the first time was upgraded in a project the Town Board approved in the last term.

“I did fight to make this happen, and this community center is just an excellent, beautiful place for meetings,” Madigan said.