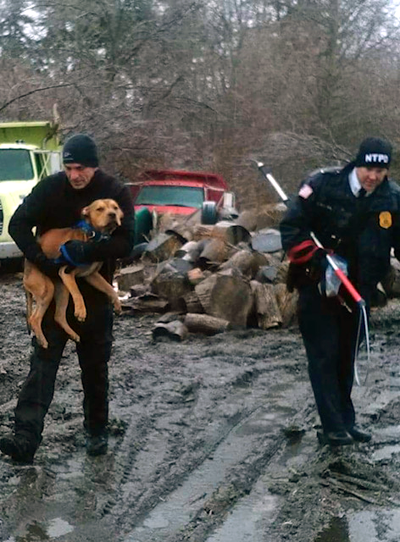 Eric Salisbury carries Franklin after the animal had been missing during a cold two weeks last January. (Contributed photo)

Eric Salisbury was appointed dog control officer in 2018 for the City of North Tonawanda. Since then, he’s become something of a legend for the dog- and cat-loving community in the municipality. Recently, after several residents commended his service, the NT City Council awarded him a pay increase.

No one knew how much work the job would be, he said.

“I don’t think that people in North Tonawanda realized how busy it really was,” Salisbury said. “No one was doing the job for a long time. Once I started, it just exploded. I’m still averaging about 45 calls a month for dog control.”

The job brings Salisbury all around the city. Most recently, since the writing of this piece, Salisbury found Rita in the woods near Doebler Drive. She had been missing from her family for 24 hours.

“The community wins again!!” Salisbury posted on Facebook. “Thank you, thank you NT Community for helping search for this beauty.”

Salisbury has been pushing for a full-time position with the North Tonawanda dog control office. He currently works three jobs, one of them as a constable in the Town of Wheatfield.

“Obviously it’s busy enough for a full-time position,” he said. “The council did give me a huge raise. It bumped me up about $9 an hour more and they gave me more hours. Instead of 10 hours a week, I have 20 hours a week. They understand the need for full-time, it’s just working it with the budget was kind of tough at the last minute.

“I think they all understand that it’s needed; maybe next year we can make it work?”

Last year, in an article in the Tribune, multiple residents came forward to address the council of North Tonawanda on just how amazing Salisbury is as an animal control officer. When a woman who was bitten by an unknown dog, Salisbury was able to locate and confirm the animal was up-to-date with rabies shots – avoiding physical pain and financial loss of the victim. When another dog was missing during a cold winter spell last January, Salisbury was working hard to find him and successfully reunited the dog, Franklin, with his owners.

“It was so cold,” he said. “I couldn’t believe that we found him, actually. I got a lot of tips and I knew he was last seen in the Witmer/River area, and I got a call one morning from the tree service by Witmer. They called me one morning and thought they had a coyote making a noise, and I was like, ‘I really don’t do coyotes, but I do have a dog that was missing in that area.’ So, I got there and walked in, go down and looked under the truck, and sure enough. I saw Franklin’s face. He was scared, he wanted to bite me, but I sat there for probably 20 minutes talking, giving him treats and he slowly moved out and I got a leash around him.”

That was the case that put Salisbury on the map, but it wasn’t the only newsworthy event.

“I actually got a call at 9 p.m. on a Saturday night,” he said. “It was just a tip about an emaciated dog locked in a cage every day, all the time. I immediately went to the call and I took a couple of police with me. When we found the dog, it was like, ‘Oh, my god!’

“I’m sure you’ve seen the pictures. I wasn’t leaving that house without that dog.”

The name of the dog was Sam-Sam. He has since been renamed and is with a good home. The abusers were arrested and convicted on animal cruelty, receiving 60 days in jail and three years probation. Salisbury said most convictions only receive a “slap-on-the-hand” and no jail time at all.

Sam-Sam, according to Salisbury, is living it up for time lost.

“She has an amazing home now, loving life. She looks amazing,” he said.

The final decision by the city wasn’t everything for Salisbury. He wants officials to understand the need for his job on a full-time basis. Salisbury said he doesn’t care about awards or publicity. Ultimately, it’s for the animals, he said.

“Basically, I work 75 hours a week between my three jobs, which is hard,” Salisbury said. “I actually made a threat to quit if I didn’t get full-time, but honestly, who am I hurting if I quit?”