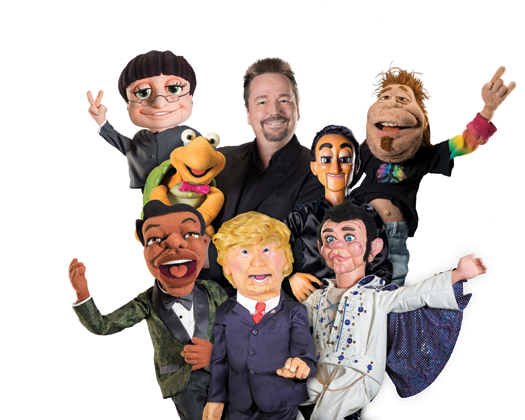 Terry Fator excited to perform in Falls; no interest in competing on 'America's Got Talent: The Champions'

Though a preteen Terry Fator knew someday he would entertain audiences around the world, he couldn’t have predicted the way in which fame would find him – or the degree of success that followed.

In front of millions of TV viewers, Fator faced off with some of the top variety acts in the country as part of “America’s Got Talent.” Upon winning season two in 2007, he was booked to perform at the famed Mirage Hotel & Casino in Las Vegas.

That headlining gig has lasted more than a decade.

If you ask Fator to pinpoint where his career took off, he’ll tell you it wasn’t necessarily on NBC or for Simon Cowell, but rather when he was holding a broomstick as a young boy.

“I spent all that time – instead of griping that I was being forced as a child to do something I didn't want to do – I utilized that time to get myself hundreds if not thousands of hours of practice. When I got old enough to start my own career and say I wanted to be a professional ventriloquist, I had all those years of practice, while I was doing janitorial work for my parents’ business.

“And I think a lot of people, they focus on the negative, whereas instead I was like, ‘Wow, this is great. I've got all this time to practice.’ ”

Fator explained, “They say that it takes at least 10,000 hours of work on something to become world-class at it. And that's absolutely the case, and (with me), if not hundreds of thousands of hours. Because, once I made that decision that that's what I wanted to do, I never looked back. And I worked on it on a daily basis for 20 straight years, and I did as many shows as I possibly could. Paying shows and non-paying shows, just so I could get in front of audiences, and create, and write, and hone my act. It takes that kind of dedication.”

Hard work has enabled Fator to find success both in Las Vegas and touring the country.

The performer – a singer, comedian, impressionist and ventriloquist – will bring his unique stage show to Seneca Niagara Resort & Casino on Saturday.

“I absolutely love Niagara Falls. It’s one my favorite places,” he said. “The last time I went, my wife could not go. I am so excited to be there with my wife, and for us to go to the falls. Can't wait.”

Fator discussed his career, and enthusiasm for Niagara Falls, in this Q&A.

Q: You are coming to Niagara Falls just a couple of days before Christmas, and we are excited about that. It's going to be a fun show. Something I find I have to ask people a lot this time of year – and in particular in your case, because you're leaving the warm, comfy confines of The Mirage – what is appealing to you about Niagara Falls in the wintertime?

Terry Fator: Niagara Falls is amazing, no matter what. I actually went there a few years ago, and it was completely frozen solid. And it was just about one of the most beautiful things I’ve ever seen in my life. It was unreal.

That's the beautiful thing about living in a place like Las Vegas, is that you can go to a place, and take part in the snow and the cold, and get that Christmas feeling, and then go back to a nice, warm climate.

Terry Fator: Amazing. This has been my 10th year at The Mirage. That's quite a milestone to make 10 years as a headliner at one particular place. It's really an amazing honor, and I'm been trying really hard to live up to that, by making sure that I keep the show fresh and exciting.

I've written a whole new Christmas show for The Mirage, and I’ve put in some new characters. I did a whole new show this year on the road, also, to kind of mark the 10th year at The Mirage. The one that I’m bringing into Niagara Falls is going to be different than the ones I've done in previous years.

I'm just very much looking forward to it. It's going to be fun. I love traveling. You know, I don't have a lot of time, because I work a lot. We’ll come in there, and I’ll probably have to take naps, and do my soundcheck. My wife, we always try to take just a little bit of time. We’ll go out and see the falls when we’re there. I love traveling with her and being able to see different places and perform all over the country. It's great.

Q: You mentioned the significance of being 10 years at The Mirage, and that is certainly notable. You were named the best Las Vegas headliner; you also were named the best family-friendly show. Those two things don't necessarily go together; you wouldn't necessarily think a family-friendly show would be a top act in Las Vegas. What would you say has been the key to your success, and the key to having this 10-year run at The Mirage?

Terry Fator: It's been quite an amazing experience to get the gig in Vegas, first of all.

While my show is a family-friendly show, it's written for the adult intellect. (However,) I don't ever cross the line of dirty material. I might tap dance a little bit and do a double-entendre joke or something – something the kids won't understand – but there's no swearing, and there's nothing that would make you, if you bring your kid to the show, say, “Oh man, I just can't believe my kid saw that,” or heard that.

And that's really from my heart. I've always been a clean entertainer, and I feel that it's just a responsibility. You know, you bring puppets – and there’s some ventriloquists out there who don’t have my take, and I'm fine with that. I don’t have a problem; I love them; I’m huge fans of them. But for me, I just feel like, you know, you bring your kid to a puppet show, you want to make sure at least it's clean.

But the writing is definitely for the adult intellect. And also, it’s very musical. So, I'll be doing impressions of everyone from Justin Timberlake, to Taylor Swift, to Frank Sinatra, to Elvis Presley. Every different genre and age of music is represented.

Q: A lot of times I talk to singers or performers and, with singers in particular, maybe they've got a half-dozen hit songs, so they know when they go out there they have to do those half-dozen songs. They know their setlist, from night to night, is pretty well set in stone.

When we have someone like you – when you’re able to tackle all of those genres and do older stuff and newer stuff, and obviously you sing, you do comedy, you've got the ventriloquism – when there's so many different things that you could possibly throw at an audience every night, how challenging is it to come up with a setlist? How do you narrow things down when there's so many things that you can do each and every night?

Terry Fator: I just do things that I feel would be entertaining, to me.

I came from the Midwest. I grew up in Dallas, Texas. So, I feel like my unique sense of humor appeals to the majority of people – unless you’re going for something extreme.

And also my taste in music is incredibly well-rounded. I love every style of music, from jazz to country; from pop to rock, to everything; heavy metal. I like everything. I like some hip-hop and rap.

So, to be able to do that, regardless of what type of music and everything you like, I can just kind of tap into that and go, “Oh, this will be fun. That will be fun. This will be fun.” And then, of course, I have my standard hits, because the songs that I did on “Americans Got Talent” that people voted for – “At Last” by Etta James, “Crying” by Roy Orbison, “What A Wonderful World” with Kermit the Frog” … those are my standards that are going to be in every show, because people actually come out to see that. So, that's kind of my greatest hits.

But the beautiful thing is it’s not hard. Because I literally have an entire world of material that I can take from.

Writing comedy is something that's fun, and to be able to create a whole new comedic idea, and then flesh it out and get it finished and then put it on the stage, it's one of the most rewarding things that anyone who is in the entertainment business can possibly do. It makes my job fun and rewarding, as well.

Terry Fator: I love the show; I love the “Champions” edition. And no, I absolutely would not compete again.

It’s like, no; once you get to a certain point in your career, even if that was how you started, there's no reason. I have no other reason, because I feel like that my being able to sustain the show and have one of the top shows in Vegas for 10 years is enough of a thing that I say I don't really have to compete on a reality game show again.

But, that being said, I absolutely love watching it. It was really fun to watch Darci (Lynne) and Shin Lim. I voted for both of them. It’s fun to watch them do it.

Q: Something else that's interesting about you, you give very often and very generously to a number of charities – military and their families, in particular. Why is that important to you?

Terry Fator: I think anyone to whom much is given, much is required. So, I feel like, to be blessed with this incredible success, and to be able to share that with those that are less-fortunate or those who are trying to make it on their own, is something that's kind of a responsibility for us. And for me, I just love helping people.

I love to give people direction. I love to help people. So that's why I started the foundation, was to be able to help those people and organizations. Kids with cancer. And, of course, I do a lot of military work.

And so I thought, “Well, if I ever get to a point where people care about my opinion, I'm going to make sure that I let those that serve know that they’re appreciated.”

I don’t think it takes much. Just telling them “Thank you,” and letting them know how much we appreciate them goes an awful long way to helping them feel better. 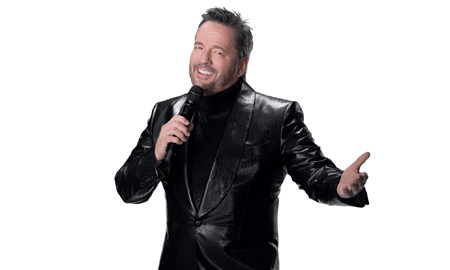 Fator is online at http://terryfator.com/.