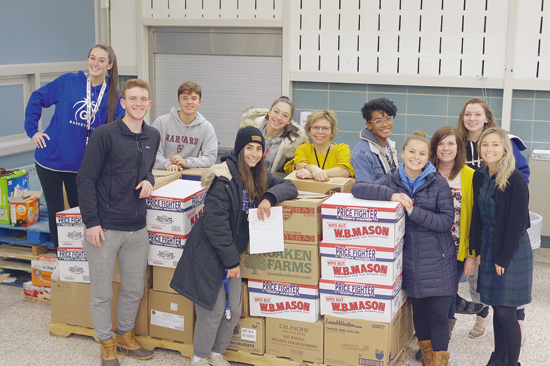 David Conboy, president of the foundation, said the organization received 10 pallets of food that was collected after Thanksgiving, brought to the Knights of Columbus Hall Thursday morning for sorting, and then distributed later that night.

“It seems like it was more food than last year,” Conboy said. “We really appreciate the support of the community and Grand Island schools and folks donating and then collecting and bringing it over here.”

Thursday morning, there were 53 families scheduled to receive food donations, “But it’ll probably go up to around 60, which is about what we usually help,” Conboy said. “We know that there’s a greater need around the holidays when heating bills go up and people are in need, and so we’re happy to be able to help with our food.”

Conboy noted, after the holiday food distribution, another major collection is in May, when the Neighbors Foundation receives food as part of the U.S. Postal Service letter carriers’ Stamp Out Hunger drive.

Food insecurity is a plight that can strike any family, even the affluent, Conboy pointed out.

“From time to time any of us could find ourselves in temporary need. And that’s exactly what we’re here for,” he said of the foundation.

Conboy thanked the 20 student volunteers from the Island who helped sort the 10 pallets of food delivered to the Knights hall. Volunteers came from the middle school, the high school DECA program, Interact clubs, and Student Council.

Bubba Rustowicz, treasurer of Student Council, was making a return trip to the Knights hall since his first time volunteering in middle school.

“I remember I was one of the younger middle schoolers like these. It was kind of cool to see all the older high schoolers out here helping out,” he said.

“Everybody here pretty much wants to be here and help other people out. It’s pretty cool to see it all,” he said of the 20 student volunteers who were on hand.

Seeing 10 pallets of food for donation to 60 families “kind of shows you how a community can come together and help each other out in times of need,” Rustowicz said. “And it’s really special to see it, honestly. Especially here where we’re in the works of it and we get to kind of put it all together. It’s pretty awesome.”

Matt Aronica, a DECA member, was making his first trip to the Knights of Columbus Hall to volunteer.

“I think it’s a great cause. For the families that are in need, I think that this is a really good thing that we can help people out. It’s cool that we can give back to the community,” Aronica said.

For those who think the Island, as an affluent community, doesn’t have Aronica said, “There’s more to the Island than you would think.

“There’s more privileged sides in every community, and then there’s those who are less fortunate,” Aronica said. “I’m fortunate enough to be able to participate in something like this where I can help give back and help organize so that families can sustain themselves.”

Kaylee Butcher, vice president of competition for DECA and vice president of Student Council, was making her third annual trip to the hall for working. “I thoroughly enjoy it. It’s great to see how much the students can come together and do,” she said.

“It’s great to see that we were able to get our whole Island to come together to give back to people. Some people who live on Grand Island have come from this and are now giving, which is a great thing to see, a whole circle.”

Butcher was one of the students who went around to Island neighborhoods picking up donations at houses, undaunted by foul weather.

“We had to go up to a lot of doors because it was pouring outside, so no one wanted the food to get damaged. It was a lot of running around in the rain, but it made it like 10 times more enjoyable,” she said. 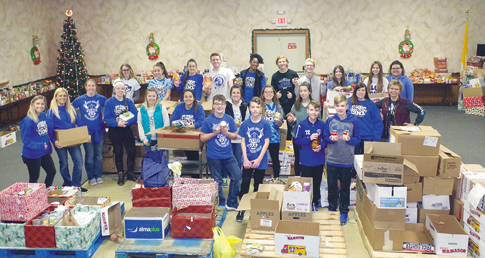