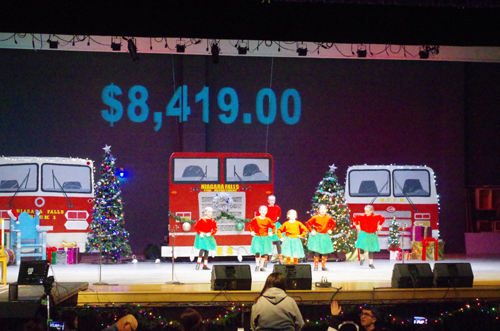 Firefighters and students give back

The Niagara Falls Firefighters annual Christmas Toy fund kicked off this past weekend at Niagara Falls High School with multiple dance and music groups gracing the stage as officials described the effort put into this event.

A labor of love, one father was particularly glad to showcase the generosity he’s witnessed, not only in his position as chairman for purchasing and distribution of the toys, but as a father to his two daughters.

“My 9-year-old daughter, Abigail, and my 5-year-old daughter, Vailyn, each won the 2016 and 2019 Peach Blossom Competition, respectively,” Vinnie Orsi wrote in an email to the Tribune. “Upon winning, they were each given a brand-new bicycle. I enjoyed a ‘proud father moment’ the other day, when my daughters realized they have not yet unpackaged their bicycles and suggested donating them to less-fortunate children.”

The two girls said they already had bicycles, so rather than have two bikes each, the thing to do was to give them away.

“I feel awesome about it, because I like helping other people,” Abigail said. The sentiment was echoed by her sister.

“I already have a bike,” Abigail continued, wishing the new owners well, whoever they might be. “They’re brand-new. I hope you have fun.”

“I enjoy helping, obviously my job is (helping people), then the volunteer work we do is helping the kids in the community,” Orsi said, explaining how proud he was of his daughters. “I don’t want to say it’s a calling, but it kind of is. You’re either drawn to it naturally or not. Luckily, with this (the telethon), it’s all in place (to give).”

Chief of the Niagara Falls Fire Department Joseph Pedulla was also available to give some background of the generous event.

“I’ll blow your mind on information of this,” he said. “This started around 1935. Firefighters would take toys out of the garbage, find broken toys, fix them and give them to kids in the neighborhood who didn’t have anything. This was when toys were made out of wood and it went on, probably to the mid-’50s, and toys started to get to be plastic.

“In the ’70s they started a ‘radio-thon’ and that was the first part of what this telethon is today.”

The firefighters would do everything they could throughout the year to raise money for the fund, including collecting change in the streets, also known as “the boot.” Pedulla said the radio-thon morphed into a two-day telethon that was done at the Niagara Falls Convention Center, an event that was immensely popular, but when the center was closed down, Niagara Falls High School filled in the gap by donating the space. Moreover, students studying broadcasting could chip in.

“It’s a wonderful thing for the community,” School Superintendent Mark Laurrie said. “And from a school district’s perspective, it’s a wonderful way to tie in our theater, OSC program that’s doing all the production and filming and camera work. So, the kids get to see what giving and community spirit is all about, and for a good reason: This is the perfect venue to do a community telethon.”

“It’s a good day in Niagara Falls to get out and do things,” he continued. “This is an annual event that we’re really proud to host, and I’m most proud of. They use our facility; this is a community jewel, and they use our kids to film and broadcast it.”

The event, which makes approximately $80,000 each year and helps almost 1,300 kids with toys, isn’t just about toys, Pedulla said. It’s just the most visible part of it.

“We also do warm clothing program,” he explained. “A lot of that is with the teachers from the schools. They give us the name of kids they see coming in without the proper clothing. With those names, we send a voucher to the family. They come to Walmart for one day and we go through the vouchers, we verify the kids, they have to bring in identification for the vouchers, and then they go shopping. …

“We check they’re getting for that kid. In other words, you don’t have a 3-year-old girl getting 40-size jeans. We make sure they get clothes, boots, hats, gloves, jackets. Then we run them through the line, we take care of the bill. We really try to police this very well. That’s, in my mind, the most important thing we do.”

And it’s not just the kids the fire department is helping.

“We take about between 275 and 350 seniors citizens out of care-facilities, who usually don’t get out very much, and we bring them to a place and we feed them holiday meals with entertainment and flowers,” Pedulla said. “Everybody gets a gift, and a lot of them are ambulatory, so we rent wheelchair busses and we bring them in there. That’s very emotional for a lot of them, because they appreciate it so much, and it’s very fulfilling for us. They’re out for about five or six hours and it’s really a nice thing.”

“We’ve actually had a husband and wife that were in separate nursing homes who got to see each other that day, and that was very touching.”

Finally, another activity funded by the telethon is the chance to start over after a fire has devastated a family’s home.

“Throughout the year, if we have a fire where an entire family loses their home and they have no way to recoup from that, we give them essentials to start life again,” he said. “We have a budget and we have a limit, but we’ll get them sheets and pillows, just stuff they need to start over.”

The telethon continued and another year of generosity, whether from school-aged kids to veterans of the force, is coming to an end.

“There’ll be bands and dance groups,” Pedulla explained as Legacy Dance Studios hit the stage. “We do a lot of cooking videos with our guys cooking at the firehouses. It’s a lot of fun.” 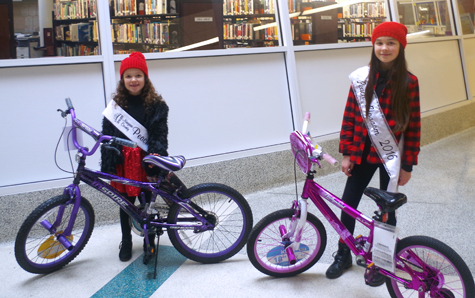 Abigail and Vailyn Orsi show bikes they are donating to the Toy Fund.