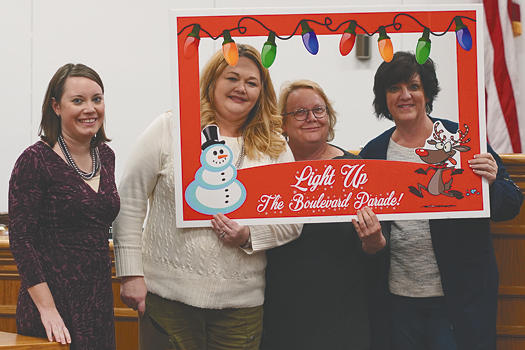 Grand Island Town Board: Light Up the Boulevard 2019 dedicated to Fran McMahon

The Grand Island Town Board issued a town proclamation at its regular meeting Monday in Town Hall extolling this weekend’s Grand Island Chamber of Commerce Light Up the Boulevard Parade and Festival.

In doing so, the board honored the event’s founder, the late Fran McMahon.

“We’re dedicating this year’s parade and festival to Fran,” said chamber director Jennifer Pusatier as she, Sue Berger and Diana Nobumoto of the Grand Island Chamber of Commerce accepted the proclamation. “For those of you who don’t know, Francine started Light Up, and we lost her this year, so we’d like to memorialize her.”

The proclamation stated that “the first Light Up the Boulevard Electric Parade and Festival for the Grand Island community was conceived by Francine McMahon, a director of the Grand Island Chamber of Commerce.” Town Supervisor Nathan McMurray noted McMahon was not only instrumental in Light Up, “but also she did a lot of work with the Miracle League and many other projects on Grand Island.”

In making the proclamation, the board stated, “This event is now a family tradition for many Grand Island residents.” The proclamation further stated that “this year Light Up has expanded the event to include more events and opportunities than ever.”

The proclamation resolved that the “Town of Grand Island thanks the chamber for their efforts and encourages all community members to participate in the eighth annual Light Up the Boulevard Electric Parade and Festival.” The event will take place from 3 to 7 p.m. on Saturday, Dec. 7.

Pusatier said Town Hall will be open for movies, kids activities in the downstairs, and a visit with Santa. Outside they will be “a gigantic blow up maze. We had it last year – the kids loved it, so we got it again this year,” Pusatier said. A heated tent and food trucks will be on site as well, Pusatier said.