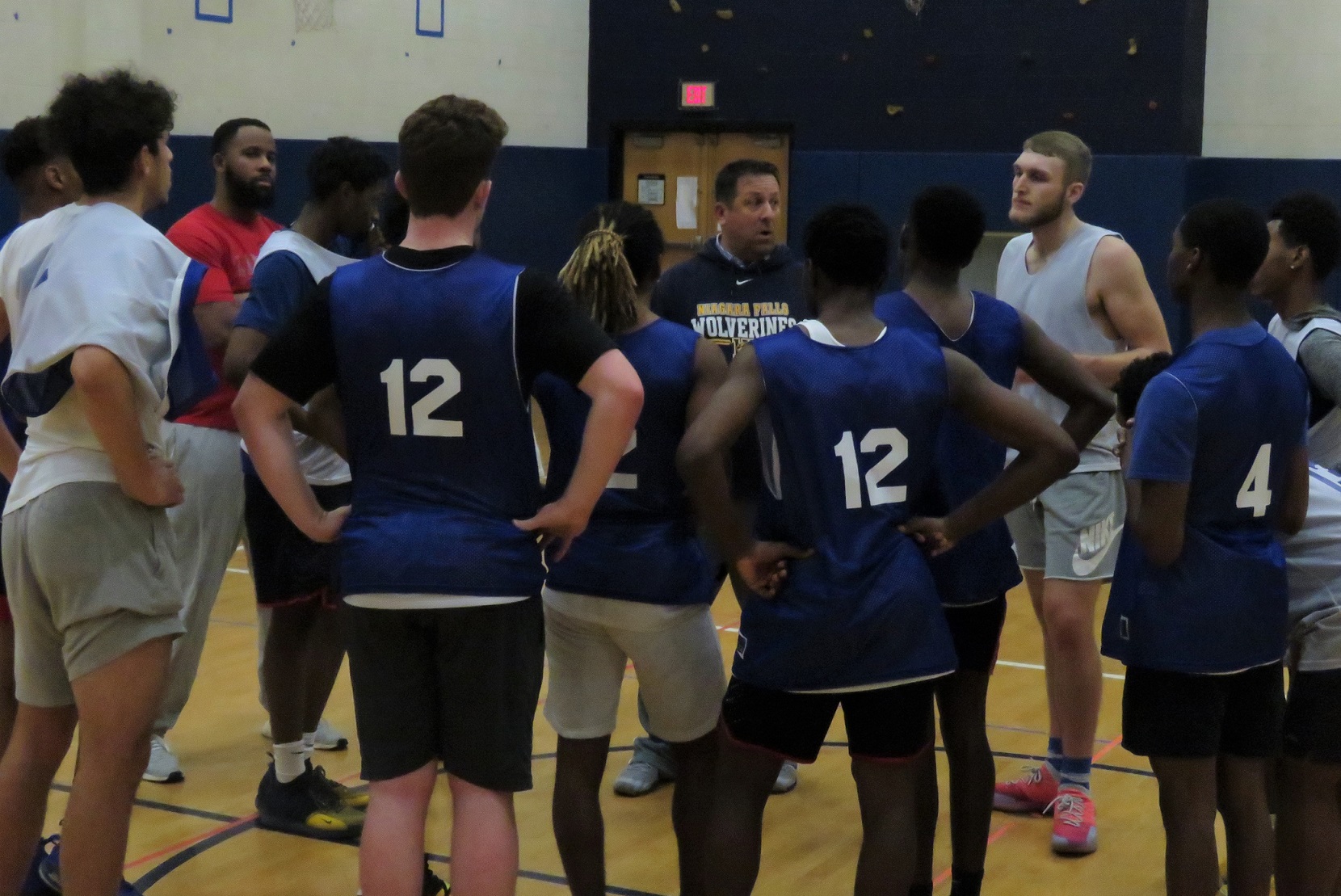 Following the success, expectations of what was to come were high. With sophomore Jalen Bradberry and freshman Willie Lightfoot expected to return, a return trip to states was in the team’s mind.

Things changed, though, as Lightfoot took his talents to highly ranked Sunrise Christian Academy in Kansas and Bradberry transferred to The Park School of Buffalo. In addition, longtime coach Sal Constantino stepped down from his position a few days following the final four loss to West Genesee last season.

Despite all the change, expectations haven’t, as first year varsity coach Brent Gadacz takes over the Wolverines. It may be Gadacz’s first year as the head of varsity, but the coach is no rookie when it comes to NF basketball. The coach has spent the last 24 years in the Wolverines system, most recently as the junior varsity coach.

“I wouldn’t consider it a new gig. … It’s just a different level, that’s all,” Gadacz said of the new title. “Most of the kids have played for me, with the exception of the few kids that are new to the school this year.”

In addition to Gadacz, assistants Robert Harris and Corey Campbell will join NF. Harris, an All-Western New York player for the Wolverines back in 2004, will coach the JV, while Campbell, who Gadacz called “one of the smartest players” he’s ever coached, joins the staff.

The roster, despite very few returners, is deep for the Wolverines and possesses more height than is usually seen out of an NF squad. Key players include Jaemon “Mookie” Turner, who played huge minutes as a starter in last year’s playoff run, Joey Palka, Faybion Prather and Taylor Sanders.

The senior Sanders started the first couple games for NF last season before his campaign was shelved due to a knee injury. Prior to his junior season, Sanders played big minutes as a sophmore. Being back on the court meant a lot to the Falls forward.

“It feels great to be back. I missed a lot last season,” Sanders said. “To be back feels great and I’ll never take it for granted again.”

Last season, Turner played more off the ball on offense, where this season the ball will be in his hands a lot. Of his role, though, Turner added that more is now asked of him even when he doesn’t have the ball in his hands.

“I’m expected to be a leader on the court, because we lost Willie, and he was a great point guard. Now I gotta step up and lead the team,” Turner said.

Between Turner and Sanders, Gadacz said he expects a big year out of, not just the duo, but all his returners.

“I think they’re two of our seniors that are going to hopefully lead us in the right direction. … I think (Turner) is one of the most underrated players in Western New York, by far. … I think he’s going to turn some heads. There’s a lot of people out there that don’t know how good Jaemon is. … He’s going to handle the ball a lot more this year, instead of playing off the ball, because that’s his natural position anyways as a point guard.

“Taylor, coming off that injury – he just got cleared in October – so the main thing is getting him back in shape. … He’s been getting a lot of shots up and his shot has improved tremendously,” Gadacz said.

The coach added that Palka came into the season in great shape after an offseason spent heavily in the weight room and he’ll be a force for the Wolverines in the paint.

Despite losing Lightfoot, Bradberry, seniors Josiah Harris, Naim Bradley, Jaden Turner and Moran Montgomery, Gadacz said the Wolverines roster is stacked with unselfish talent that is willing to share the ball with each other.

“One thing that’s nice to see early on in our first couple of scrimmages is how we’re sharing the basketball. (I’m) totally impressed by that,” Gadacz said. “From coaching the past 24 years, I don’t think I’ve had a deeper team, even as an assistant. … Right now, I’m comfortable playing almost the entire team at any given time.”

Year in and year out, the Wolverines keep a high standard of goals. The team doesn’t always discuss it openly, but Gadacz said a Niagara Frontier League title, Section VI title and more are always on the team’s mind. Despite that, the coach said the guys just need to take it one game at a time and get better every day.

The Wolverines have won 13 sectional titles since the opening of the new Niagara Falls High School in 2000. Since the school’s opening, the Falls has played in the Section VI Class AA title game all but two years.

The new look Wolverines will be tested with a fierce non-league schedule. Team’s include Amherst, who played in the Section VI Class A1 title a season ago; Cardinal O’Hara, the defending Catholic High School Athletic Association Class B champs; Bishop Kearney and University Prep, two big name schools out of Section V Rochester; Canisius and St. Joes, two big time programs in the Monsignor Martin league; and Jamestown, a squad the Wolverines have quite the history playing against in the sectional finals.

In addition to the non-league schedule, the Wolverines look for revenge in the NFL, as they battle defending league champs Lewiston-Porter at home, Jan. 28.

With losing some talent from last year’s roster, some people have doubted what the Wolverines will be able to accomplish this season. To the naysayers, Gadacz simply said, “Come see us play.”

Sanders backed up his coach and added, “Keep the same energy. Don’t join the wave when we’re winning and figure it out. I heard it all summer, ‘You’re not gonna be good,’ but, hey, they’re going to talk, because I was on the outside looking in.”

The Wolverines start the season in the Cataract City Classic at home at 8:15 p.m. Friday, Dec. 6, versus Amherst. The Falls is back on the hardwood the following night at 8:15 p.m. versus Cardinal O’Hara.