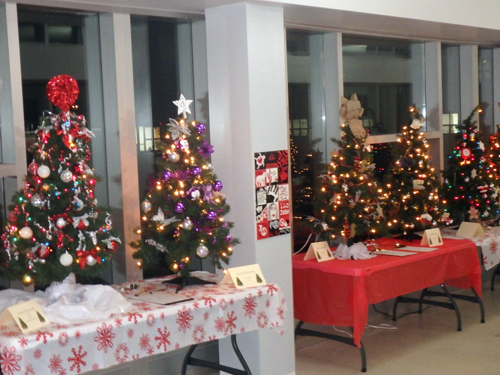 Thanksgiving is a time for gathering together as a community and to celebrate good times by eating together and playing some games.

That’s how the Niagara-Wheatfield School District feels, anyway. On Friday night, the entire school met in the cafeteria for Thanksgiving dinner.

Porter went on to explain the past few years have been “challenging,” especially for getting everybody together.

“Our community is very diverse,” she said. “It’s difficult to have events where all of the community can come together. We wanted to make sure that we emphasize that we are a Falcon family. Even though we might not all be best friends, or we’re different from each other, we’re a family, and we got each other’s backs, and we need to be more unified.”

“This is really an attempt to unify the community.”

The dinner included turkey, several kinds of stuffing (the sausage stuffing was a real crowd pleaser) macaroni and cheese, pasta, mashed potatoes, green bean casserole, and a chicken and rice dish from a refugee family now living in the U.S.

“This is kind of like a modern-day ‘stone soup.’ We said we’d bring the turkeys,” Porter said. “We had no idea who was coming. We invited the entire district’s staff, the entire student body, and encouraged them to bring their families. We have former students who are here. Every level of employee is here from bus drivers and cleaners to the superintendent.

Superintendent Daniel Ljiljanich was there, showing students a game his family plays every Thanksgiving called “Spoons.” It’s like musical chairs, he said, only with cards and spoons. The action was so fast this photographer could only capture a blur.

Other games included checkers and “Connect-4” and the gym was open to play “Pin-Dodge,” a game in which two teams attempt to knock over bowling pins on the opposite side of the court, as well as hit their opponents with rubber balls and get them “out.”

Another aspect, which several families enjoyed, was the decorated Christmas trees that lined the hallways. All beautiful with lights and ornaments, many of the trees had themes such as “At the Zoo,” and “Everything ‘80s.” The trees had been bid on, or were still being bid on, through a silent auction benefiting a family in need.

“Adopt-a-Tree is a part of the Adopt-a-Family program and it also goes along with the 12 Days of Giving,” said teacher Alan Pogel. “For instance, students that didn’t bring a dish (tonight) brought in canned goods. We’ve been collecting food for the last week now and we have another week to go.”

Pogel said, “Our 12 Days of Giving became our 14 days because we do extra things like collecting turkeys, and everything goes to the needy.”

“The Adopt-a-Tree came to be, because some students came together with some faculty to try to figure a way to create a really warm atmosphere here for the months of November and December,” he continued. “It kind of morphed from being a display of trees to being a contest of who could make the best tree, or the most unique tree, knowing that the trees were going to be auctioned off or given directly to the needy family.

“About half of the trees are up for auction. The proceeds of that go directly to the 60 families that Niagara-Wheatfield is adopting. … You can see how unique the designs are. There are businesses; there are individuals; there are teams; the administration throughout the district; different classrooms; everybody joins in. We probably have 85 to 90 trees out there, which is remarkable.”

“We have a special relationship with the Fashion Outlets,” Pogel added. “They took five of our trees … to draw attention to Adopt-a-Tree. There’s a sign there that directs people to come here and bid on trees.