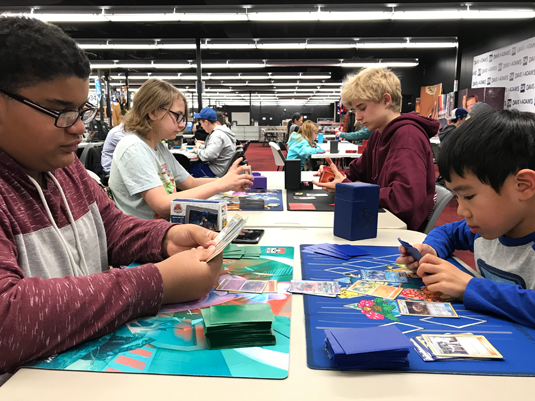 “You hit me with ‘Continuous Blaze Ball’ and now my Mewtwo-Mew only has a measly 40 HP left! It doesn’t help that I’m low on cards. … A ‘Dedenne’ or ‘Bill’s Analysis’ would sure come in handy right about now.”

The players take turns placing down their cards. These consist of helpful supporter cards in gameplay, energy cards that allow for action and, of course, Pokémon. These Pokémon cards correspond to the thousands of creatures created by The Pokémon Company since its first release in 1996. Pokémon’s television show, films and video games visually illustrate this world for many; however, Pokémon’s trading card game is unique. It offers a tangible representation of this world.

Players are jolted by a rush of excitement in searching for beautiful full-art cards, rare alternate-art cards, shiny reverse-hollows, useful trainer cards, their favorite Pokémon splashed across the paper. They add to their collection, construct and reconstruct their deck of cards. They hold the world of Pokémon in their hands when they sleeve up their decks. Their knee bounces when determining the next best move in the match as they sit, facing their opponent who waits in pressing anticipation.

This foreign language is one many learn to speak at Dave and Adam’s.

Indeed, Buffalo’s fan superstore does more than offer tailgating necessities and autographed memorabilia at competitive prices: Dave and Adam’s facilitates free-to-play Saturday Pokémon tournaments that are open to all ages and all levels of knowledge. 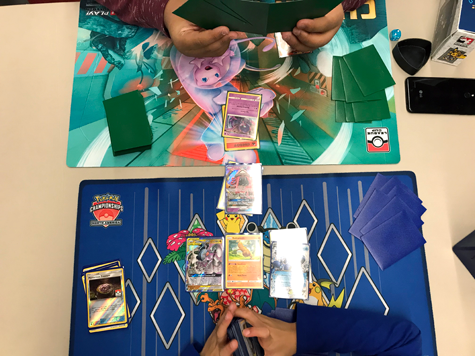 The 40,000-square-foot retail store provides a spacious gaming area for tournaments. This gaming area exists on an elevated floor space and is lined with tables and chairs for Pokémon play. On a typical Saturday, the area is filled with the familiar faces of the Dave and Adam’s gaming staff (John and Tony), and the friendly faces of Pokémon participants – many of whom are weekly attendees.

One of the regular gaming customers is Henry Lee. He plays Pokémon every Saturday with his wife, Sume, and their son, Michael, age 7.

Henry says he is struck by the welcoming atmosphere the store provides. The Lee’s frequent Dave and Adam’s because “Michael looks forward to playing every Saturday at Dave and Adam’s, and the regular players and staff have become our friends,” Henry SAYS.

Henry notes that John and Tony are both patient and encouraging to beginning and/or younger players. They host monthly Pokémon open houses that teach beginners the how-to-play basics, as well as the components of building a proper Pokémon deck, in a non-competitive environment. 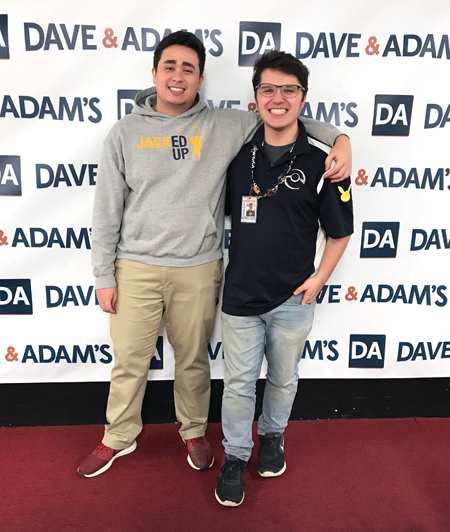 Tony, left, and John of Dave and Adam’s gaming staff.

Certainly, a competitive Saturday Pokémon tournament can be overwhelming and unfamiliar at first; however, John – affectionately titled the store’s “Pokémon Professor” – says he works to support a warm and light-hearted gaming environment. He hopes to ensure the comfort of newcomers by splitting tournament participants by age division, encouraging their curiosity, suggesting they watch tournament matches, and urging them to practice until they feel ready to join in the competition.

Tony, head of the gaming department, says another draw to Pokémon at Dave and Adam’s is “the benefit of free tournaments. It’s no cost at all, and you get prizes comparable to, or even better than, other shops in the surrounding area.” 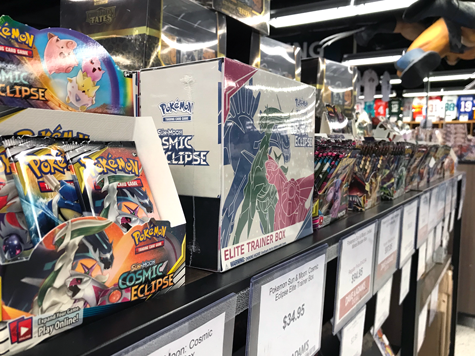 Dave and Adam’s carries all types of Pokémon sets, from “Roaring Skies” to “Cosmic Eclipse.”

These prizes at Dave and Adam’s Pokémon include:

Additional packs awarded to the top players in every tournament

All this talk of tournament play and prizes begs the question, “Why Pokémon, of all things?”

For Henry, he says “We’ve found Pokémon to be a great way to bond with Michael, and it’s fun to be able to discuss new cards and strategies whenever a new (Pokémon) set releases, or a big tournament wraps up.”

He adds, “the Pokémon card game is genuinely fun, interesting, and challenging to play, even as an adult.”

“Even if you lose every single match you play, when it comes down to it, you are doing something you love and are passionate about and you should be grateful for it,” he says. “Learn to adapt and come back next week ready to win.”

Henry and Sume agree that Pokémon has taught their son, Michael, what it means to win and lose gracefully. While winning feels great, Henry states, “Sometimes the most learning and growth comes from the games we lose.” 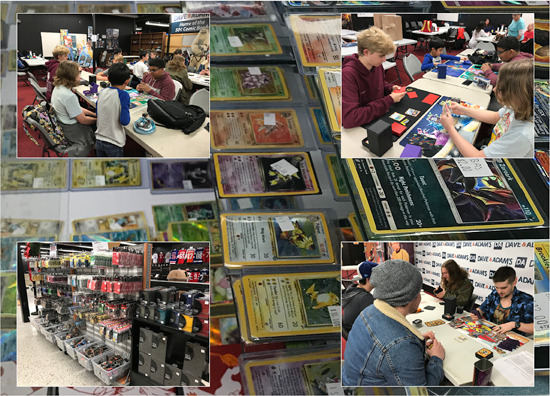 John says, “Saturday Pokémon at Dave and Adam’s is a place where good friends – and good memories – are made.”

For the Lee family, one of their best memories competing in Saturday Pokémon was their first event. It was a rather important occasion – a “prerelease day” – wherein Pokémon’s latest set was made available.

“We lost every match, were largely unfamiliar with the cards, and were even kind of shaky on the rules, asking, ‘How many cards do you start with again?’ ” Henry says.

He remembers that, nonetheless, the other players were pleasant and patient in answering many questions.

When it came time for the players to open their packs of Pokémon cards, the Lee family was made to feel welcome, almost immediately, by being asked the common gaming question: “Did you pull anything good?”

Michael Lee, an impressive competitive Pokémon player at just 7 years old, says his best memory is from when he, alone, won a Saturday Pokémon prerelease event.

John himself has many good feelings regarding the relationships he has built with the Dave and Adam’s Pokémon community. He says, “I run many of the Pokémon events at Dave and Adams and, although it is cliché, I love every moment of Pokémon.”

“Being able to play games with the kids, make them laugh, and help be a part of a community that is focused on having fun has been incredible,” he says. “This would be an experience I would not trade for anything.”

Dave and Adam’s is a collector’s dream. The company carries collectors’ items that span from gaming products, to sporting cards, to comic books, to vintage toys, to fan apparel, to memorabilia. For more information on this Buffalo shop, check out its website: https://www.daveandadamsstore.com/.