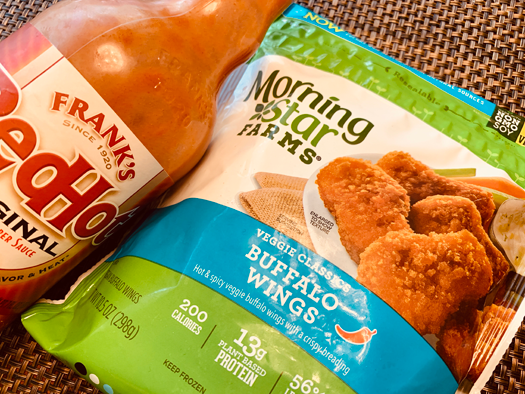 Believe it or not, it does work!

Being vegetarian in WNY - home of hot and spicy wings and things!

The fourth quarter is approaching after the long battle of a game. Chris and Connor are jumping off the couch in their Bills gear screaming at the television with anticipation and fear.

“Can we do it? Can we take home another win?”

“We did it. Yes! Another win for Buffalo!” says Chris as he eagerly goes to dip his tortilla chip into a heaping bowl of “chicken wing” dip off the table.

“Of course! There’s nothing better than some chicken wing dip after watching the Bills compete for the win,” Chris yells.

But little did he know, it wasn’t actually chicken “wing” dip, it was wing-less!

How is it possible you ask? Can you enjoy a football game while being able to consume one of the most popular snacks in your surrounding area, and have it be meat-free?

The answer is yes – and you’d be quite surprised how little the taste difference is between “real” meat products versus plant-based meat products.

It’s been noted that some people think they “can’t be vegetarian,” because it is “too hard to have that kind of diet” when being surrounded by a bunch of meat-eating friends and family. This can be a factor for anyone trying to transition when they are anywhere in the world, but particularly in WNY during football season.

I transitioned to a vegetarian when I was 16. It wasn’t particularly easy for me, because of that reason. I loved chicken fingers and chicken wings, pepperoni pizza and especially chicken wing dip during a football game. I was always surrounded by meat products. Family parties, school events, friendly gatherings – you name it. It’s almost impossible to avoid them, especially living in a city that is the home of chicken wings.

I was, and still am a very picky eater. I didn’t think that it’d be possible for me to make the switch, because I was afraid to try new things ... especially “fake meat”. If it’s not real meat, what is it? How does it taste? What about the texture?

When I tried my first plant-based meat alternative, it was an “Impossible Burger,” and it was so good I was in shock. I immediately thought, “There’s no way this isn’t meat. It tastes so good, you’d never know it wasn’t real.”

It was really impossible.

This gave me hope and, from that point on, I slowly started trying more and more plant-based products, including plant-based boneless buffalo chicken wings, and meat-less “chicken” wing dip.

My sister was a meat-eater up until this October. She was the same way I was growing up. She loved meat when she was younger as it was often unavoidable. However, she was getting sick of eating it. Her main problem was that she was weary to try plant-based products.

“It was difficult at first,” Brittany says. “I was skeptical to try the plant-based proteins. I wanted to become a vegetarian for a while for many reasons. Mainly because I wasn’t enjoying meat as much as I used to, and as I became more educated on the abuse of animals in the industry, and I was learning more about the products I am consuming, it started to disgust me.

“I wanted to switch, but I was concerned for myself. I didn’t know what I was going to eat.”

After weeks of convincing her to try the boneless Buffalo wings' by Morningstar Farms, she finally did it – and she’s been a vegetarian ever since.

Morningstar Farms is one of the more well-known companies for vegetarian substitutes. The company makes all types of “veggie cuisine,” not just Buffalo boneless wings. It also has some options that are completely vegan (no dairy involved) and gluten free!

“Some of my favorite products from them are the Buffalo wings, and the Buffalo chik patties. They taste just like meat,” Brittany says. She notes the “texture of fake meat can be hard to master” but Morningstar, by far, has some of the best tasting plant-based proteins she’s ever had.

Thinking about giving plant-based wings a try during the next game? Morningstar offers boneless wings in two flavors, Buffalo and parmesan garlic, along with barbecue wings that are very similar in taste.

When considering making the switch, many people think that not eating meat means eating meals that are “less pleasing” and “not as tasty.” But as you can see, there are many plant-based meat alternatives that will have you thinking the exact opposite.

Fellow Buffalonian Justine Deleguardia isn’t vegetarian yet. However, she has been considering making the transition. She recently tried Buffalo cauliflower for the first time. This is basically the vegetarian version of chicken wings.

“Swore it was a boneless wing it was so good,'' she says.

There are many alternatives to the “real things” that people tend to neglect. The simplest changes can help you eat cleaner, while successfully ditching the meat industry.

Brandon DuFrane, another Buffalonian is vegan. He not only doesn’t consume meat, but any animal products.

Most people believe making the switch will be difficult, and they lose hope in the process.

“It’s not nearly as difficult as you think it’s going to be,” he says. “The temptation can certainly occur, as many of the ‘meat’ foods that I see are foods I previously enjoyed. When trying to resist temptation, I just remember why I did this in the first place.”

Brandon makes most of his meals, but recommends Allentown Pizza, as well as 9 Lives Bakery for some local options.

Branch out and try to use plant-based substitutes this season; you’d be surprised how many meatless snacks you can find that will leave your taste buds believing you’re eating the real things.

Try It For Yourself