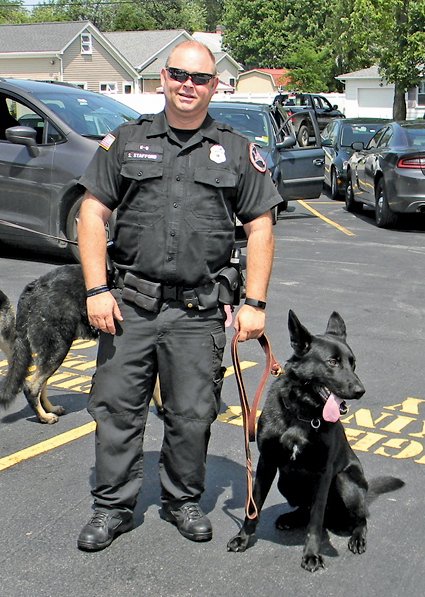 LPD: Cast your vote for Shadow

Article and Photo by Terry Duffy

You’ve likely seen a dog on patrol around the River Region with the Lewiston Police Department. He’s better known as “Shadow,” a striking black German shepherd who is LPD’s latest member of a nearly 10-year-old K-9 patrol unit.

Did you know Shadow is competing in a national contest? Lewiston Police Chief Frank Previte confirmed as much this week.

According to its website, Aftermath is “the nation’s premier crime scene cleanup and biohazard remediation company,” serving law enforcement agencies across the U.S.

Aftermath’s K9 grant program – one of its many law enforcement offerings – was founded “to showcase, support, and reward the unique contributions made by K9 units across the country and, indirectly, to recognize and support the communities that we both serve. The month-long contest awards up to $20,000 in total grants (nationwide), to new or established K9 programs for maintenance, safety equipment, or officer training.

“Officers and community members nominate and vote for local departments through our website and on Instagram; the departments with the most popular votes receive grants (up to 14 grants are awarded).”

Previte said Aftermath provides grant awards ranging from $500 to $5,000 to the K-9 unit that ranks with the most votes tabulated in positions from No. 1 to No. 7 on the national contest.

Shadow was nominated for the Aftermath grant by LPD Capt. Josh Cain and the dog’s handler, officer Scott Stafford.

“They ran it by me; I thought, ‘Yeah, we could do it,’ ” Previte said, noting he was apprehensive of entering the contest at first. “I mean, we’re a small department, a small township. If it’s an online voting kind of thing, we could be dealing with some pretty big departments.”

Previte said he did some investigating and found other big departments – the Buffalo Police Department, the California Highway Patrol, plus a number of other big city agencies – were also competing in this national contest. The LPD entry would need to place an impressive seventh in the nation among the entries.

In fact, Previte said he was taken aback on how well Shadow is doing: No. 1 in the New England Region.

“When it first started, I was kind of surprised at the votes that we’re getting. Then as it transpired, we’ve gotten to the point now where Shadow is now No. 1 in the whole New England Region.”

Shadow is competing against K-9 entries from 35 other law enforcement agencies in the New England region – one of six nationally where this contest is being held. Others competing regions include the Mid-Atlantic, Southeast, South, Midwest and West.

“To be seventh out of the whole country is … for us, it’s ridiculous,” Previte said.

“As of (Wednesday), we’re first within our region, and he was bouncing between seventh and eighth nationally. That’s crazy to me.”

Previte called the ranking yet another example of the Lewiston community’s wide-ranging acceptance – call it love – for its hometown police department.

“The poll is overwhelming, I think we enjoy such (love). There are people on our website that are putting this out, are sharing, encouraging other people to vote. You can vote every 24 hours,” Previte said.

Voting opened Oct. 23 and continues to Sunday, Nov. 3. People are allowed to vote, and vote again, every 24 hours. Visit the LPD Facebook page or log on to https://woobox.com/nvpv4y/gallery/yA7v5aMy3_0 to cast a vote.

“Look, it’s not only a popularity contest to begin with, it’s also a tenacity, like how many people stick with this. And we’ve had a lot of people … voting every 24 hours,” Previte said. “To see the support that we’ve had, this kind of stuff, I think it does a ton for morale – for these guys and girls here, the officers here, to know that we have that much support from people that will stick with us, support us, it’s awesome.”

Previte called his K-9 unit, “a great asset as far an officer’s safety tool. When we go to a house or a business we suspect has been burglarized or that somebody’s in, rather than send in an officer to clear the building, we’ll send a dog in.”

He continued, “One of the biggest things, as well, is the just the ability to have the dog as a tool for searches” in schools, looking for drugs in vehicles on the U.S.-Canadian border, in detecting firearms, tracking suspects, even assisting in lost people or rescues.

The LPD’s first two K-9s, Radar and Taser, both had their service lives to the department cut short due to medical problems. Previte said he has hopes for Shadow, a male Shepherd obtained from Scandinavia, now 2 years old, to remain with LPD for another six years or so.

In addition to the aforementioned services, Previte said the LPD K-9 unit “is worth it to me just as a community relations tool, as well. And when it’s out, it makes the law enforcement officers all that more approachable. It gives us yet another opportunity to engage.”

River Region residents have until Sunday to lend their support and cast a vote for Shadow. Voting may be done via the link noted above, on the LPD Facebook page, or on Twitter or Instagram.