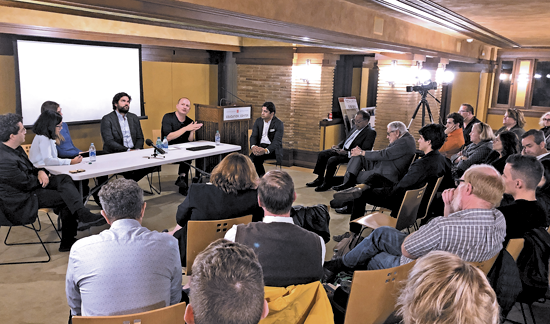 Artists weigh in on venue’s future

The Artpark & Company staff, board and master plan team on Thursday said they are keenly aware of the Lewiston venue’s past, encouraged by its future potential, and motivated to use the park’s resources to shape “values of cultural democracy, social justice and environmental health.”

A public meeting was held at the Martin House Education Center in Buffalo to discuss ways in which to tie together performance and landscape. The Western New York arts community was invited to weigh in on this portion of the master plan process.

“We want to hear from them about our curatorial thinking at this time, because that plan is also coming together in parallel with all the facilities and capital improvements,” Artpark & Company Executive Director Sonia Kozlova Clark told The Sentinel.

She reminded the crowd of three-dozen, “Artpark has such a legacy of land art and very advanced and diverse art practice in its past. We also know that some of that kind of went dormant for a while, or was scaled down, because of the funding reasons. Now we’re at this crossroads where we feel we have this new opportunity to really readdress it, and really build a new Artpark with a new artistic agenda.

“Part of our master plan that we’re talking about is addressing the park, the facilities, but more importantly, our artistic focus.”

Clark noted, “Some of the ideas that we are discussing are quite mind-blowing and very transformational – not just for Artpark, but this area.”

Moderator Jordan Geiger of design studio Gekh said, “We’re here to kind of introduce and moderate a discussion with you around understanding how the relationship between the master planning process and its eventual results will continue to build and culture a relationship with the arts and with artists.”

The master plan team’s curatorial approach was defined and examined.

“That is a kind of outgrowth of the same agenda, and strategies and priorities that we’ve been talking with Sonia and with Artpark staff since about a year-and-a-half ago, and most importantly, with the task force. And that curatorial approach is something that’s now starting to take some shape,” Geiger said.

He explained, “Artpark is, and as its evolving mission statement is articulating, it is a place of the fusion of art and nature and culture, and these are themselves all terms subject to lots of contingencies and definitions. But it’s also a place for the mixing of things that underlie these, and undergird them, like data – the data that might yield a deeper understanding and even an active response to the ecologies of this kind of constructive nature that is Artpark. And cultural production, where different communities might come together, where different cultural practices and artistic practices continue to evolve with each other, and really all of that as a kind of inclusive place of many different social groups, many different publics.”

“If there are any ideas, especially within this framework, I want to hear about them. We can’t commission it all ourselves, but there’s many other ways in which we can collaborate.”

She added, “I just want to invite the public to come into Artpark, and to realize it is for you. It is your land.”

Artpark & Company Board Vice Chairwoman Alison Lytle said, “Because of Artpark’s unique position right now, working on the master plan, and all of the creative minds that are in this room right now, one of the primary focuses, as you’ve seen, is Artpark combining art, nature and culture together. But there’s a fourth element, which is all of you; it’s the creative minds.”

She noted, “We’re really seeking to make this be a place where the new creative minds of Western New York can all engage together, and learn and teach the rest of the people who are visiting Artpark something new about themselves; something new about the environment; how they can change, perhaps, some of their own habits, and how they want to engage in the future of Western New York – and, for that matter, wherever else they go along their journey in life.

“And that may be a rather lofty idea, but that’s what Artpark is about, is getting the conversation going, between people like all of us who are in the room, people who were in Lewiston, who were longtime residents, the wonderful creativity of the team that we have in front of us, and we’re excited to hear all your ideas and what you take back from this meeting.”

Though much of the discussion centered on what Artpark was, is, and will be, in a philosophical or cultural sense, the master plan team used a portion of the presentation time to detail a wish list of physical modifications to the New York state park. Namely:

•Creating rolling landscapes within the amphitheater area to remind visitors of how Artpark was carved into the former New York Power Authority land.

•Erecting something akin to the Art-El that could serve as a main hub – both visually and mechanically – for future onsite art endeavors and perhaps even residencies.

•Building a structure complementary to the Mainstage Theater to hold events and presentations year-round.

No timetable or projects costs/funding were revealed, though it was noted the master plan would be executed in three phases.

Clark said the design team has “a good grasp” of what needs to be done.

She noted, “It’s not an all-or-nothing kind of project; it’s a transformative, long-time, kind of long-term road.”

In the first two phases, “We’re definitely going to focus on the park, at large,” Clark said. “I was very glad to see that our first priorities would be bringing people into the park, making the park much more accessible, much more interesting. Really improved experience. Really make it more of an attraction, not just for the locals, but on a much larger scale.”

In phase three, Artpark & Company would look to renovate and winterize the Mainstage Theater.

“We’re still putting pieces together. We’ve collected most of the information already, but now’s the time to really put it all in front of us, and start drawing and moving pieces, and we’ll have a plan by December,” Clark said. “We already know the sort of nuts and bolts of the plan. It feels like we have a direction, and we have the structure, which we can now follow.”

Artpark & Company held a public meeting inside the Mainstage Theater in June.

“We will definitely have (another) public meeting in December,” Clark said.

She emphasized, “We all need to understand the master plan is not a design. It’s a strategy for moving forward. And that’s what we’ll present in December to the public.”