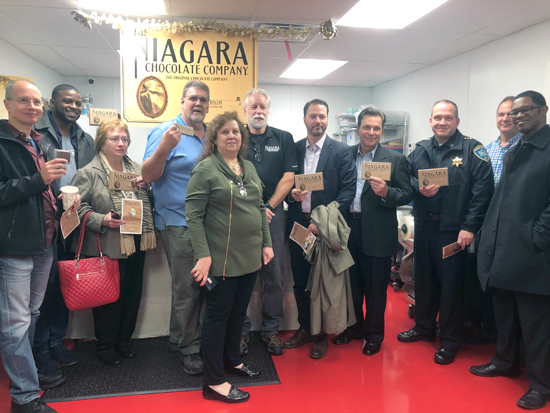 Speaking of The Niagara Chocolate Company's grand-opening on Thursday, New York State Sen. Rob Ortt said, "Congratulations to Mary Ann and the Hess family on the opening of a project nearly a decade in the making. Our area is home to some incredible history and stories of the past, and the reopening of the Niagara Chocolate Company is just an additional way for people to be reminded and reconnected with our roots." (Photo courtesy of Ortt's office)

It started as a side business, making chocolate. It’s something Mary Ann Hess had been doing all her life. It was a passion aside from her regular job as a hairdresser.

Over time, it turned into Niagara Honeymoon Sweets, which Hess opened a little more than 14 years ago. Since then, she said it’s been a wild ride: These chocolates have brought her to the Emmy’s, the Oscars, even the White House.

“I told her, if that’s your passion, follow it,” said Donna Roma, Hess’ best friend since high school and biggest fan. “And Mary Ann never does anything half-way!”

At an unveiling Thursday, another piece of Hess’ family came to light as she announced she is the owner of The Niagara Chocolate Company, a business where her grandmother, Lillian Viola McGinley, worked as an employee in the first quarter of the 20th century.

“I’m excited. I’m so glad everyone came; it’s wonderful,” Hess said after the unveiling. “I hope I remembered everybody’s names, because there are so many people who’ve loved us.”

The Niagara Chocolate Company’s treats include “Barrel over Niagara Falls” – literally a minute chocolate barrel – and engraved chocolate bars featuring the original Niagara Chocolate Company’s factory, as well as one that depicts Homan Walsh’s “Niagara River Gorge” and another called “Niagara’s Daredevil,” in which a tightrope walker is embossed into the most delicious of mediums, chocolate.

Hess didn’t fail to thank everyone in the room, from local leaders to the people that prepared each box for shipping. These people, in turn, thanked Hess.

Of those assembled, many enjoyed the chocolate, but just as many said they were there because of Hess.

“There’s no harder worker than Mary Anne’ even in school, she looked out for the underdog,” Roma said.

“I’ve never known her not to tackle a job or give up on anything,” said Angelo Onevelo of the Town of Niagara Lions, speaking of a Lions’ parade float she designed 20 years ago. “Here’s the other thing, too. She has been so helpful to our club over the years. She thinks of other people more than she thinks of herself at times. … We have a special service award the Lions give. It’s called a Robert J. Uplinger Special Service Award. Ninety-nine percent of the time it goes to a Lion. Three years ago, we gave it to Mary Ann.”

“From 1913-15, The Niagara Chocolate Company was a local favorite. Their specialty, a chocolate covered wheat biscuit, is still available today ­­– made from the same natural ingredients used for generations,” the opening event’s flyer read.

Nabisco made the biscuit for the recipe in Niagara Falls, in a factory right next to the original chocolate shop.

“I want to thank you all for being here. I thank all of us for coming, this has been a 10-year experience of trying to get done,” Hess said. “There’s just so many of you that have helped me.”

A wide variety of chocolates can be found and purchased at The Niagara Chocolate Company, 5540 Porter Road, Niagara Falls, as well as online at www.niagarachocolatecompany.com. Hess can be found on Facebook @niagarashoneymoonsweets.