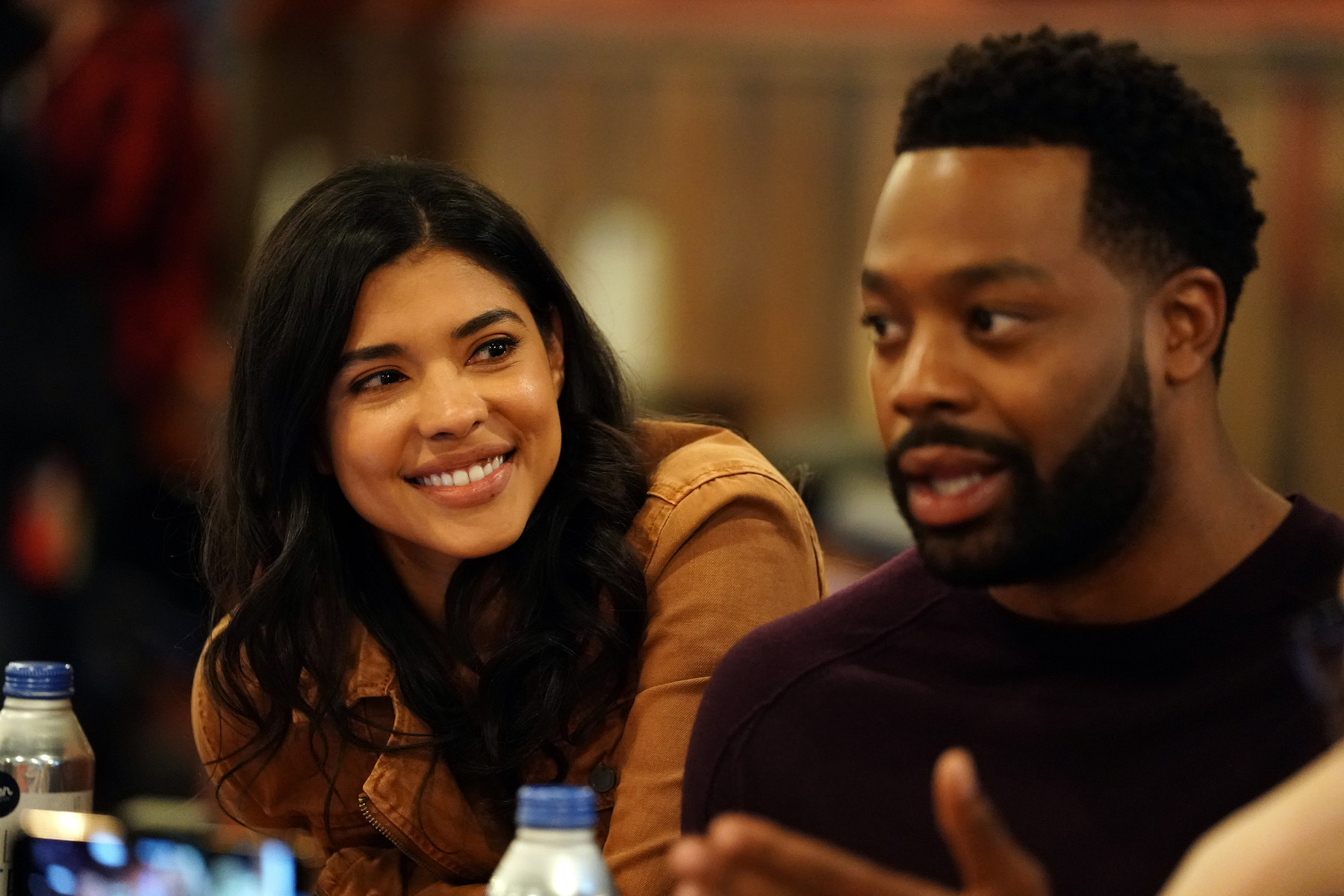 Lisseth Chavez and LaRoyce Hawkins of "Chicago P.D." at "One Chicago Day" at Lagunitas Brewing Company in Chicago. (NBC photo by Elizabeth Morris)

The beginning of Kevin Atwater’s partnership with Vanessa Rojas was just like the start of any coupling.

“I don’t know if you saw how they met, but they almost killed each other,” actor LaRoyce Hawkins said Monday. “I like to think that's how some of the best relationships get started. It’s like, we’ve been through most of it already. The worst part is over.”

On last week’s episode of “Chicago P.D.,” Atwater went undercover to try and bust new series foil Darius Walker (Michael Beach). In the process, he cozied up to Walker’s bartender, Rojas (Lisseth Chavez). As the two of them went out to execute a drug deal, and guns were drawn, Atwater learned Rojas, too, was an undercover officer. They were there to arrest each other!

Seeing chemistry between the characters – and realizing the intelligence unit is down a person with the departure of Jon Seda’s Antonio – audiences wondered if Rosas might stick around for a few episodes.

At #OneChicagoDay, it was revealed Chavez has, indeed, joined the cast.

Prior to “Chicago P.D.,” the actress had recurring guest appearances on “Station 19,” “The Fosters” and “Murder in the First.”

Showrunner Rick Eid said, “In real life, she’s delightful. Seems to be having a lot of fun, and crushing it. … We’re excited to write her.”

“This week’s episode is a big episode for her,” he explained. “I think you’ll really get to see much more of where she came from, what she’d like to be, and some insight.

“It’s another onion for us now, that we get to peel slowly, in how she fits in with the team; because, obviously, when you add that to the team, it changes the dynamic of the team. So, now it starts introducing us to some new possibilities, storywise."

La Salle added, “Voight said it best: He said, ‘She’s got a level of street that you just can’t buy.’ It’s such a cool line. And that’s what you want, because, again, as we always strive to be as truthful as possible, we need people that offer different sides of the truth. And she does that.

“I’m personally very happy we have a woman of color in the mix now. As you look at Chicago, the structure of policing here, you’ve got so many different types of elements. And we’re adding and growing and just offering some really cool truths, or variations of the truth, or insights. She brings that nice element to it.” 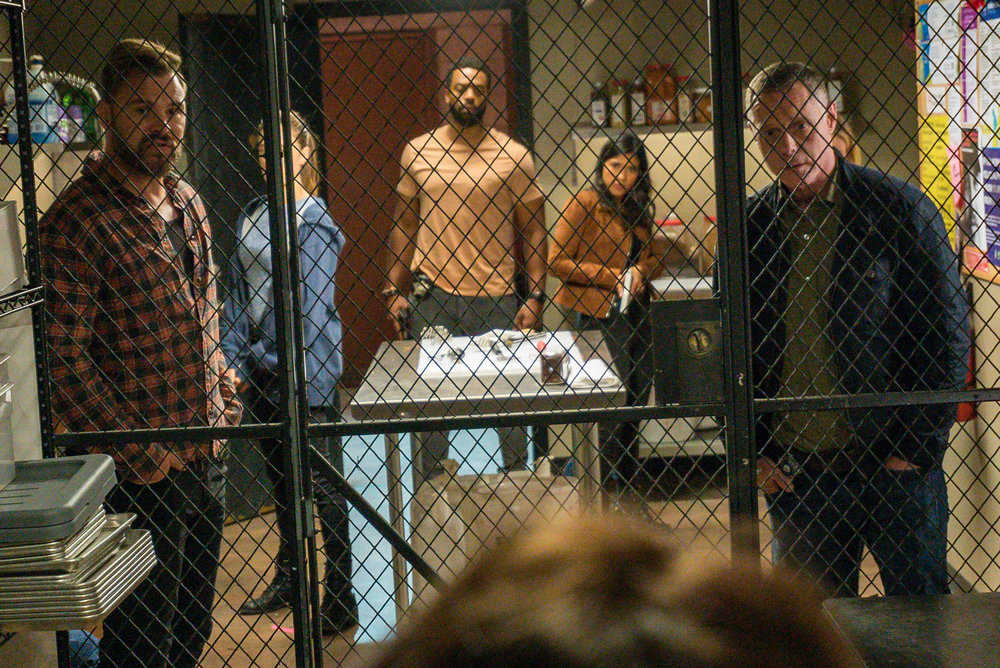 Chavez said her character relishes the opportunity to join the intelligence unit – where she can learn from (and perhaps romance) Atwater.

“I think she wants to be a part of a family,” Chavez said. “She comes from a foster system, so I think family and love is something that she’s always wanted. Hopefully they can adopt me!”

Hawkins said, “We love her, already. She’s annoyingly adorable. … She works hard, and that’s really all we care about.

"We dig deep every week. We wake up, sometimes 4:30, 5 in the morning. Not to act, but to add balance. I think that’s what separates ‘Chicago P.D.’ from most other cop shows that we’ve seen, is that we’re doing our best to really tell an authentic story. It’s not about looking cool playing cops and robbers for Hollywood. It’s about telling the stories of the first responders behind the scenes of some of the most serious situations in the city.

“She came in and was ready to give us that; and we’re grateful for her.”

Atwater and Rojas already have their own handle, “RoWater.”

“What I like about ‘RoWater,’ especially in the absence of a Jon Seda, the stories that we can tell now very authentically bridging the gap between the brown and the black, I think, is very necessary and can be a very nuanced way of telling a romantic story,” Hawkins said. “I would hope that, unlike our constituents on the team prior to us, that we can take our time and really plant seeds that grow into a solid synergy. With her being a part of the unit, she’s going to grow into being a part of the unit soon. It’s going to make our feelings even more difficult to have, because I don’t want to go out the way I’ve seen Halstead and Ruzek.”

He joked, “But I also kind of got to get to her before Ruzek does! Cuz that boy ain’t playing.”

Hawkins added, “I think that we have the opportunity to do something very different. This show hasn’t seen a relationship like this. I think it’s necessary, especially right now.”

“We’ll take our time with it,” he said. “A lot of writing still has to be done, in order for us to really know exactly how and when. We’re just doing our best to trust the chemistry and plant our own seeds, so those sparks that you may have seen – it’s just us doing our best to find the windows where we can tell a story that means a lot from us, but also is true to us.”

#OneChicagoDay is a chance for the media to interact with cast members from all of Dick Wolf’s Windy City series: “Chicago Med,” “Chicago Fire” and “Chicago P.D.” Fans can see these actors work together in a yearly crossover. This year’s event came within the first month of the season – which meant Chavez wasn’t just stepping on to one show, but three.

She said it was a challenge to bounce between series: “The thing was getting to know the different characters I wasn’t familiar with. I’m like, ‘OK, so who’s (this)? What’s going on?’ ”

A good portion of the crossover was shot over 16 straight days. Though the experience was grueling, “It was interesting,” Chavez said. “I was like, ‘I get to be on other shows, too!?!’ That was awesome. I loved it. It was an awesome experience.”