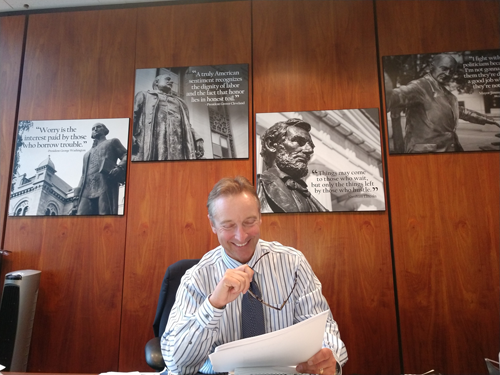 Jim Toellner of Grand Island sits in his office at WGRZ-TV. (Photo by Michael J. Billoni)

WGRZ-TV purchased two full pages in the Buffalo Broadcasters Association program book to congratulate Jim Toellner, its president and general manager for the past 16 years, on his recent Hall of Fame induction. On the first page, it reads: “Your Friends and Family From 2 WGRZ On Your Side Are So Proud of You, We Needed An Extra Page to Show Everyone!”

That page contained 14 creatively designed messages from members of his team inside the station. They included such passages as:

•“Jim truly cares about the morale and well-being of every Channel 2 News team member – he is a hands-on leader who shows us he cares.”

•“The thing that has always impressed me the most about Jim is how passionate he is for Western New York. He is the personification of the Buffalo-boosting ‘Talking Proud’ ad campaign of the 80’s.”

•“Jim is a general manager who truly believes in making Western New York a better place.”

Toellner was extremely humbled and honored to be inducted into the Broadcasters Hall of Fame on Sept. 19 in front of a record crowd in the WNED Studios, but he was more excited by whom occupied the several WGRZ tables – his family, friends, golfing buddies and his team from the station – truly his second family.

WGRZ anchor Kelly Dudzik narrated a video introducing Toellner that evening and used one of the station’s tag lines to describe him: “’This is Home’ and no one epitomizes that more than Jim Toellner.”

Toellner and his wife Bernie reside on Grand Island and are the proud parents of Brittany and Kristin. He grew up in North Tonawanda, attended Niagara-Wheatfield High School and graduated with a Bachelor of Science in management with a marketing concentration from the University at Buffalo in 1981.

It is extremely rare for someone in the turbulent media business today to lead an affiliate station in his hometown for as long as Toellner has.

“It has been extremely exciting to do this job in my hometown and to lead and motivate a team that can truly make a difference for people and can make this a better place to live for all of us,” he said. “I have been vested here, and it is great meeting people on the street or in the grocery store with story suggestions or comments about how we are doing.”

How exactly can a local television station truly make a difference in our community?

Toellner considers everyone inside the Delaware Avenue newsroom and corporate offices as members of a team, adding: “Television is the ultimate team sport – you need producers, writers, editors, marketers, a sales team and then those behind the camera, reporters and anchors. Communication and teamwork are vital.

“It’s all about the people,” he adds. “Putting the right people in the right position, finding them, nurturing them, keeping them, pushing them and hugging them is what it is all about.”

“Mr. TV, as I call Jim, is the consummate professional who leads by example," said Scott Levin, who co-anchors the evening newscasts with Maryalice Demler. “He loves to say ‘Teamwork’…and without the ‘Team’ it is just ‘Work.’”

Reporter Dave McKinley added: “There is a certain esprit de corps in his management style. The team building concept he continues to employ, contributes greatly to the overall success of our station.”

Jeff Zimmer, CEO of Reeds Jenss, said on the video: “Jim’s leadership is awesome. I have told him many times he could write a book on that subject. He is that good.”

Toellner is equally proud of the station’s longtime community involvement, led by Colleen Nossavage, a Lewiston resident. He points to its history of support for the Ride for Roswell, the Susan G. Komen Walk, the Food Bank of Western New York, and an original supporter of Kids Escaping Drugs.

Its involvement with KED is so deep that the WGRZ logo is incorporated into the Kids Escaping Drugs logo. Toellner recently joined its board because he strongly believes in its mission. He is also a regular volunteer for the Skating Association for the Blind and Handicapped and Opportunities Unlimited of Niagara.

Toellner loves to interject famous quotations as he speaks. For the wall behind his desk he asked the station’s creative team to photograph landmark statues in Buffalo of three United States Presidents – George Washington, Abraham Lincoln and Grover Cleveland and one Buffalo mayor, Jimmy Griffin, while he found his favorite quote from each.

Just another motivating tool he uses with his team at WGRZ-TV.