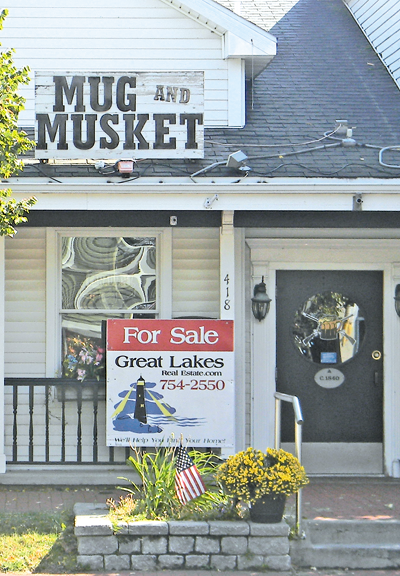 Gauging the fallout of last week’s unexpected closing of Youngstown’s Mug and Musket Tavern by operators Catherine and Mike Stella, the ownership group of 418 Main Street is maintaining an optimistic view, both on the status of the property now for sale as well as the future of business in the village.

“I wanted to bring you up to speed on where we’re at,” said Youngstown resident Greg Miller, who identified himself as president of the ownership group of the building at 418 Main St.

Miller said the group is comprised of several local investors who acquired the property at an auction in 2014 from an entity known as Ye Old Pizza Shop Inc. Prior to that, the building – other than operating as Rosie’s Pizzeria for a brief period – had sat vacant following the earlier departure of Brennan’s.

Soon after, Miller, joined by partner Claudia Andres, decided to take on the task of both owning and actually operating the business. And so, the Mug and Musket began.

“Our vision: Let’s make it like a pub, a local meeting place,” Miller said. “We could use it for parties, business functions, meetings, etc. So half of us (the ownership group) were trying to get the restaurant up and running.”

Catherine Stella, who came on the scene in the months following the purchase, was hired as manager of the new Mug and Musket.

“She ran the bar and kind of was overseeing things when we we’re not there,” Miller said.

Within a year or so, Catherine and her husband, Mike, were invited by the ownership group to actually take over the Mug and Musket, and a lease arrangement began in fall of 2015 for the couple to operate the business.

Miller stressed that, from that period to current day, the building has been and continues to be well maintained, with repairs to what actually is two buildings joined together completed by the ownership as they came up. Past improvements include extensive plumbing work, two new HVAC rooftop units, and repairs to the walk-in cooler unit to address leaks.

He went on to cast doubt on comments raised by Mike Stella in last week’s Sentinel report as to the condition of the building.

“Some of the things that Mike was bringing up, there may be a difference of opinion on – whether or not – it really needs to be done, (or) would have been nice to have done,” Miller said.

He suggested the condition of the building’s roof, one of the concerns raised by Mike, was not completely accurate.

“I have personally walked the roof of that building several times,” Miller said, noting he is in the rental/real estate business, owns other properties, and handles maintenance. “I’m a pretty good judge of roofs; it’s something I look at all the time. My opinion of that roof is that it’s got between five, maybe 10 more years.”

Miller added he is scheduling a thorough examination of the roof condition by contractors and would address it as needed.

“We as an ownership group … have done everything in our power to help them (the Stellas) along the way” during this time frame, he said. Miller said that included favorable lease discussions as well as negotiations toward a purchase. “Our intention … what we thought was going to happen, was if the business was up and running well, that they would buy the building from us. That’s what made sense to us when we leased it to them.”

Miller said the group was surprised when Mike Stella revealed plans to shut down Mug and Musket by the end of September, unless significant changes were made.

He said the building is currently listed for sale by Great Lakes Realty for $299,000 as a complete turnkey operation. It is currently the only commercial building available for sale in the village.

Speaking for the building’s ownership group, Miller said, “I have never seen people as accommodative, as we have all have been (working) toward (making) this business (a success). We have a lot invested (here). We have all been very accommodative on that to succeed. We all wanted that thing to succeed like crazy.”

He said the owners were “very attentive and are proud of their working relationship with the Stellas.”

Miller went on to sound equally upbeat on the business climate in the Village of Youngstown. “We have eight restaurants in the Youngstown area. They’re all doing well; they’re successful.”

Admitting the notable exceptions – Destino’s and the Old Fort Inn, now both closed – Miller pointed to the successes. These include Ray’s, Somewhere, the Stone Jug, the Galley, Main Street Pizzeria and the Village Diner.

“We have, obviously, restaurants in the area that are doing well and succeeding,” Miller said.

“From what I’m seeing, I feel like Youngstown in general is on the rebound,” he added. “It’s beautiful.”

Miller pointed to the improved properties from north to south on the west end of Main as well as the new and thriving businesses – including Everything Youngstown, Riverview Fitness, That Youngstown Barber – all along the Main Street strip and beyond.

“That village is on the upswing. Ed (Webster) and Ken (Scibetta) buying Melloni’s, that’s a positive. The Galley is a very good positive; Becky has done a great job there. Even the Stone Jug, they’ve gone through quite a change and they’re coming back really strong.”

As far as the Mug, Miller said he would look for a restaurateur “that can run a really good food restaurant, then get someone to run and promote the bar side.

“I believe that, if somebody were to come in there … give customers in the village a little bit more (in terms of) hours of operation … in the restaurant, and in the bar,” that could be a good business.

He went on to recall the days when Brennan’s and Main Street Pizza did a gangbuster business on Main Street.

“You place a phone call, go stand in line, people were getting pizzas,” Miller said. “There is so much potential for a restaurant-type person to run the food side of it; and on the bar side, have that entertainment thing.”

“We want more. That’s our vision of it. We’re looking for a skilled, restaurateur type of person who wants to come down here and continue the positive growth that Youngstown’s had,” Miller said.