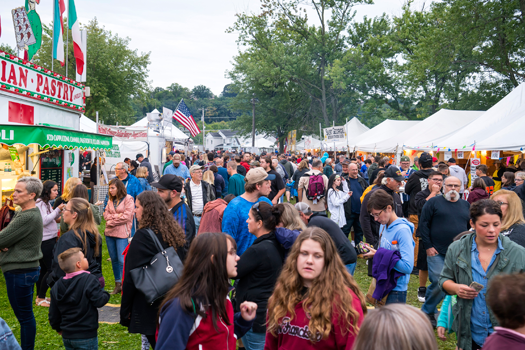 Thousands of people descend upon Academy Park each September for the Niagara County Peach Festival. The event's 2020 location is up in the air. (Photo by Wayne Peters)

Peach Festival will be discussed

The future of Academy Park – and, by association, the Niagara County Peach Festival – will be decided by a group of people Mayor Anne Welch assembled together this week.

“I have been trying to put a committee together for Academy Park, to redevelop the park,” she said at Monday’s monthly board meeting. “I have about 20 people on it. It consists of Kiwanis members, business members, our board and commissions. I think we have a good group. … We’re going to sit down and try to figure out what to do with that park – and hopefully get some funding for it.”

The committee will be comprised of Welch, Trustee Nick Conde, local business leaders (including Anthony DiMino of Tops, Kris Trunzo of Hibbard’s and Michael Hibbard of Gallo Coal Fire Kitchen), and members of the Kiwanis Club of Lewiston (including Jeff Jordan and Jeff Williams), Niagara River Region Chamber of Commerce (President Jennifer Pauly or board Chairwoman Christine O’Hara) and Lewiston Council on the Arts (Executive Director Irene Rykaszewski). Its first gathering will take place at 6 p.m. Thursday, Oct. 3, in Welch’s office at the Red Brick Municipal Building.

The meeting is not open to the public.

Of course, a major topic of discussion will be the Peach Festival. In August, the Kiwanis Club submitted a request to hold the 2020 festival at Academy Park. The Village Board tabled a motion to approve, seeking first to assess what the field looks like following this year’s event.

Kiwanis Club President Marty Pauly also is on the committee. He said it’s “a phenomenal idea,” after the meeting. “I think it’s a step in the direction Kiwanis is hoping.”

He later added, “The mayor has expressed interest in working with Kiwanis to redesign the park, to keep the Peach Festival at Academy Park.”

“I’m trying to be fair (to the Kiwanis Club). (But) I’ve had so many people tell me that they want that park (renovated),” Welch said. “I sympathize with Kiwanis. I don’t want them to leave Lewiston. I love the Peach Festival; it’s great. It was a lot nicer this year; it was a little more spaced out, so you could get through it better. And all the motor homes went up above (to the plateau). I think that it was better.”

She later said, “I think (Academy Park) can be more than what it is, and I just want the best.”

Pauly said Welch and Conde were afforded an opportunity to meet with Kiwanis leadership and representation from Amusements of America during the Peach Festival. He explained the midway provider prefers to remain at Academy Park.

Pauly said, “The optimal solution, for Kiwanis, is to be able to keep the Peach Festival at Academy Park. As the mayor stated, the ride company has expressed interest to her and us that they are not looking into moving up on the plateau.”

2020 is the final year of the midway contract between the Kiwanis Club and Amusements of America.

At the Peach Festival, Pauly said it would take Kiwanis about 10 months to plan for a new location, should the Village Board deny the club’s request for 2020. Accordingly, he said he hoped a decision would be made soon.

That doesn’t seem likely now, with the committee forming and set to meet twice in October.

“How can we? How can we say, ‘Yeah, go ahead’? We don’t even know what we’re going to do,” Welch said. “I’m not ready to (vote). I’m not comfortable making the decision right now. I mean, I’d like to see them go up above. That’s a beautiful park up there. And it’s visible.”

Pauly said a delay would “majorly affect things – if they decide to vote ‘no.’ ”

“The further they delay, the further it puts Peach Fest 2020 in jeopardy,” he said.

While the Peach Festival location will be a major topic of discussion, the Academy Park committee will have other ideas to review, too. Namely, “The bleachers will be coming down shortly. The bandshell will be moved to the other corner, at Portage and Cayuga streets,” Welch said. “That will open up the park.”

She noted the bandshell would likely utilize open-air seating, instead of new bleachers.

“All you’re gonna see is the bandshell in the corner. And it’s going to be all open. We’ll go from there,” Welch said. “The Parks Board talked about making like a bowl-type, step-down seating, like at Artpark. Maybe something like that. Until we get everybody together with all their ideas, I don’t know. We had a concept park. And I’d like to get something that has an ice rink that can convert (into a splash pad).”

This permanent rink would replace the portable version used in recent years.

“We did look at artificial ice. And that’s easy. You put down a slab and put it on there, and you just pick it up whenever you want. That’s something to be considered,” Welch said.

In terms of funding, she noted, “I’m going to look for park grants – for that, and for the plateau. I want to put a pavilion up (at each location). Infrastructure up at the plateau, restrooms; restrooms for Academy Park. I have a big wish list.”

Once the committee comes to a consensus, it's expected to present ideas to the Village Board. Trustees will vote on Academy Park's future as part of open, public meetings.