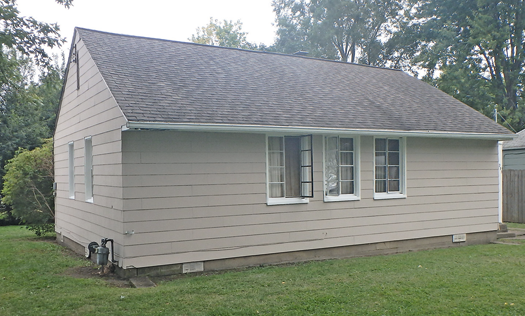 Painters Plus unveiled their ninth winner of Project H.O.P.E., Helping Others Paint Exteriors, late last week. Once the word got out, it was already certain that they’d come. Volunteers.

Jesse Gooch, owner of Painters Plus and County legislator, started Project H.O.P.E. nine years ago when he noticed that many of the exteriors of homes in North Tonawanda needed a serious paint job. According to his company’s website, he wondered if it was a simple matter of neglect, but then realized that the reason behind the dingy look was that the homeowner simply couldn’t afford the service and couldn’t do it on their own.

So, he started Project H.O.P.E. and to its credit, at least in enthusiasm, more than 30 people showed up 9 a.m. Saturday to put their hand to hard labor, help their community and thrill a grateful homeowner.

“When they first told us we were runner-up, I said, ‘oh wow!’ ” said Paul Kalinowski, winner of the contest. Kalinowski lives with his sister on a fixed income. Both siblings suffer from severe medical disabilities, Paul is undergoing chemotherapy and his sister is hooked up to oxygen for COPD. In the words of Paul, upon hearing he was the winner, “That’s incredible!”

“It happened this past Tuesday, it was wild because I came home from chemotherapy, just like every two weeks and I could tell she (my sister) had something to tell me, she was excited,” Kalinowski said. “She said, ‘you might want to sit down for this,’ and I said, ‘uh-oh!’ ” Kalinowski laughed.

In a couple hours the volunteers had already gotten to what Gooch called, “a good prep job.” Only members of the Painter Plus’s crew were allowed on ladders, but several Cub Scouts and children of volunteers were making steady progress on putting some primer over the areas they’d already scraped the old paint off of.

“It’s been coming together,” Gooch said. “The challenge is getting this many people working all the time with all the supplies we had, but it’s been working out good. We’re going to set the sprayer, within a couple hours we should be done with the whole house.”

Of those who came to help was Brian Markovich, owner of 2 Guys Construction along with his two sons.

“We work with Jesse all the time, we actually met Jesse on a job where we were helping a little girl who had leukemia,” Markovich said. “Stella is a 15-year-old girl now, she had a makeover on her house and Jesse did all the painting on the inside.”

“Jesse’s son is in Cub Scouts with mine, too,” Markovich said.

Pulling his own weight in scraping and priming was Mayor Arthur Pappas.

“I will do a little bit,” Pappas said. “For a while. Actually, it probably won’t take that long. They’re pretty fast.”

“Everybody who’s been a part of it, on the receiving end has really appreciated it,” Pappas said. “They’re usually in need, physically or financially or both, they really appreciate the help. So, in that respect, it makes you feel good to come out and do it. … We always feel good that we can help them.”

Pappas said that this was another example of how the community comes together.

“Ordinarily, you hire professional painters it costs a pretty penny and those that can’t, everybody enjoys helping,” he said. “That’s kind of a sign of this community, they do that.”

“I think it’s a feel good story, and that’s why I did it nine years ago. I wanted to give back. I have a company I started 20 years ago and my company has been very successful here, and it was one of my ways of giving back and it’s also transforming neighborhoods,” Gooch said. “They’re disabled and they’re on a fixed income. They can’t afford it and it needs it, so we’re transforming the neighborhood, we’re transforming them, their lives. I think anybody who helps out on a project feels good at the end of the day.”

And for those who missed it, and if it makes a difference, hamburgers, Italian sausages and hot dogs were donated by the Meeting Place.

“I’m going to cook it all in a little while for everybody,” Gooch said, and also mentioned that a lot of local restaurants have contributed in the past. Interested parties in good food and community service can find more about it at http://paintersplus.us. 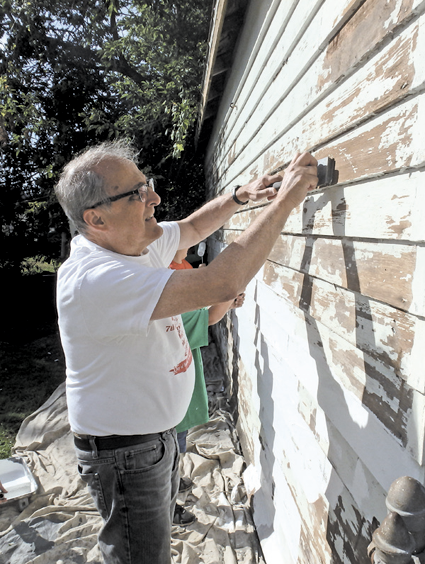 Mayor Arthur Pappas takes some old paint off of the garage. He said he’s happy to help. 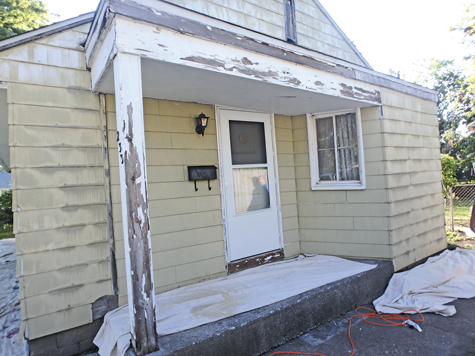