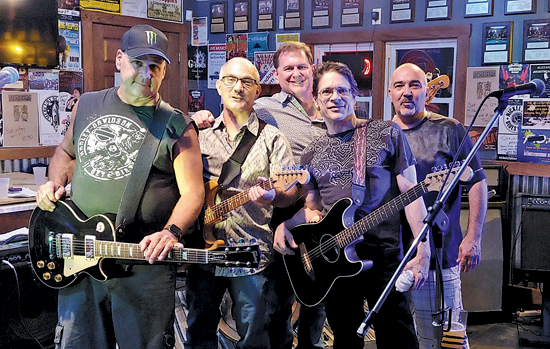 There’s a lot to do at the Niagara County Peach Festival.

Between merchandise, rides, games of chance, and, of course -- food, peach and otherwise -- it’s easy to get lost in the festivities. However, for three of the four days, between Peach Queen contestants, cheerleading competitions, and even a 5K run, another aspect of the fun will be on stage. As Fredrick Nietzsche said, “Without music, life would be a mistake.”

On Friday night, Rusty Nickel, a local band from the Tonawandas, will grace the audience with their own take of different songs throughout rock ‘n’ roll’s history, including covers of the Rolling Stones, Elvis, Tom Petty, as well as newer stuff from Staind, Blue on Black, the Revivalists, and, occasionally, an original if it fits with their setlist.

Many of Rusty Nickel’s members, five in total and with three guitarists, a bassist, and a drummer, have been in the local music scene for years and have found the secret to performing and having a good time.

“We pick songs that are in our ball park, that fit Steve’s vocal range and our musical abilities. I see bands that try to push the envelope a little bit and do songs by bands that really don’t fit what they do, and sometimes it’s not very good … we research it a little bit,” said Jim Couch, lead guitarist and backup singer for the group. “Say someone brings a song by Tom Petty and the Heartbreakers. … We’ll look it up on the Internet, and say, ‘OK, what are the top five songs by Tom Petty?’ And if that song isn’t in the top 10 or top five, we might say, ‘You know what? Chances are people might not know that song, or they might not like it as much.’ ”

Of the originals the band has under its belt is a song called, “What Do You Want From Me?” The band intends to sing it during their slot from 8:30-11 p.m. Friday.

“I wrote that song, and I sing it,” Couch said. “I wrote it several years ago when I was on vacation visiting my dad down in Texas. All my friends and fans know it. We’ve been doing that song recently, and that’s the one (we’ll be playing at the Peach Festival).”

Couch reflected that the music scene in WNY is “better than it’s ever been.” He said that the members of the band -- Steve Mineo as lead vocalist and guitar, Sal Barone on guitar and vocals, Chris Lepovitch on bass, and Joe Marciniak on drums and vocals -- all grew up in Tonawanda and Kenmore and have known each other since their school days.

“Joe is one of my best friends; we have been in bands on and off for the last 40 years, together,” Couch said. “So, me and Joe and his cousin, Sal Barone, have been getting together once a week. … Then we added Chris Lepovitch, then we added Steve, and then we started jamming a little bit -- and it was so good right away. We said, ‘We should really do something with this.’ That’s really how it started, that was November 2017 when we first got together.”

“We’re a cover band, so we do a lot. We’re a classic to current, alternative rock and country,” Couch said. “A lot of the guys, like me, have been playing in the city for years and years. I’ve been playing in a band since I was 16. I actually played with the Goo Goo Dolls back when they first started performing at the Continental at downtown Buffalo. That’s how far back I go. There are a lot of musicians in the city who are in the same boat that have been playing in different bands and different functions for years and years.”

Recently nominated as the Best New Group at the Night Life Magazine Music and Club Awards, Rusty Nickel is sure to impress.

Another musician that enjoys immense popularity, who has been performing at the Peach festival for 20 years, is Elvis tribute artist Terry Buchwald.

In a show entered as “A Tribute to Elvis with Terry Buchwald,” the performer, who first started in 1992, ran down what people can expect.

“We do the younger years and then from when he decided to move to Vegas; suits and the hits from later years,” Buchwald said. “Then in the last portion of the show, we kind of mix it up with some of the artists that inspired or were inspired by Elvis and some fun stuff. Some rock ‘n’ roll and then some country. Crowd participation songs to wrap it all up. If you’re not a huge Elvis fan, I’m trying to give everybody in the audience something that they would like.”

Buchwald credits his mother for getting him into Elvis, but also mentioned the singer’s history is inspirational. He said the first Elvis song he sang was “Blue Christmas.” Many songs later, he still feels something in the music.

“It means a lot to me, to just see the rawness of the early years, then after he served in the military and did all those movies,” Buchwald said. “His ‘Comeback Special.’ Just the energy and the excitement. Then the Vegas years! There are three totally different eras in one performer. You don’t see that anymore. There’s something that he had and he did that I don’t think will ever come again.”

As to his own origins, Buchwald said he “got dressed up as Elvis for Halloween, and that’s how the whole thing got going.”

Today, Buchwald can look back on almost 30 years of paying tribute to Elvis as a living, and can even donate funds to charities because of his work.

Buchwald will perform from 8-11 p.m. Saturday.

At the end of the day, the Peach Festival holds a lot more than funnel bread. Other performers include Everyday People, a Sly and the Family Stone Tribute who could not be contacted in time for this article and will be performing from 4-7 p.m. Sunday.