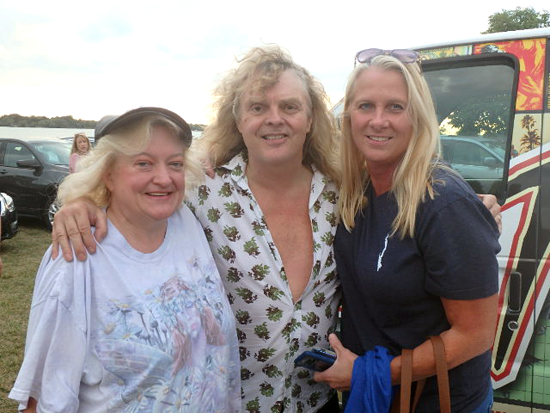 Carl Dixon, born and raised in Canada answered an ad for a band called Coney Hatch in 1979. He went on to tour around the world, rocked long hair and a killer voice, wrote hits like “Devil’s Deck,” “Hey Operator” and became the lead singer for the rock legend The Guess Who in 1997.

A little more than 20 years later, he’s played two “tours of duty” with The Guess Who, one from 1997-2000 and another from 2004-08. Dixon recovered from a massive car accident in Australia that cut off his performing with the ‘60s favorite, and is still producing music with his newest country album “Whole Nother Thing” as well as touring internationally and working with musicians from both sides of the border. He played “Thursdays on the Water” at Gratwick Park on Aug. 15.

“These are my friends on the U.S. side of the border,” Dixon said. “I’m the only guy that I know that has a U.S. work permit. So, the guys that I like to play with in Canada can’t come over here and work … it’s kind of like that old thing, ‘come and taking jobs away from Americans, I don’t think so, you Canadian rascals!” Dixon laughed.

Through contacts with show promoters from his long musical career, a group of the best Buffalo musicians was set up for a concert in Buffalo.

“We met that afternoon,” Dixon laughed again, “Went through the set then played it that night. It was a little bit ‘wobbly’ but lots of energy, lots of excitement and I enjoyed it so much, I was like, ‘wow, I think I want to play more shows on this side of the border with these guys.’”

All throughout his career Dixon played primarily for the audience. It wasn’t a matter of playing what he played, a big part of it was the interaction Dixon had with the crowd and what worked, and what didn’t.

“The constant feeling is that I always want to communicate something to make the people that are watching and listening to me happy,” he said. “I want to spread some joy and a lift into the people who’ve come to see me, that have done me the honor. … And it’s really my mission to give a happy, positive spirit in the air for the time that I have their attention.”

Dixon is also a public speaker, a role he started after his accident in 2008.

“It’s spreading some information, some thinking, some thoughtfulness. Make people see things in a new way with the things I’ve learned,” Dixon said. “That is actually more of a sharing opportunity where the things I’ve learned through these hard experiences, I feel, are worth telling people about, so they can get something out of it, and it informs their journey forward.”

The accident itself is something Dixon said he still lives with every day. He attributes his survival to having lived a clean life. No smoking, no drugs, drinking in moderation. He said that even though he was unconscious, he can remember his bandmate, Andy Curran from Coney Hatch, saying over the phone that if he recovered, the band was going to tour.

“It was the most amazing feeling of love that I experienced that time,” he said. “I was broken to bits, absolutely smashed. Fifty different injuries and I shouldn’t have lived through the night, including a spinal fracture.”

“Somehow, they put me together enough to see the light of day again. I ran into a number of people that were shocked that I lived,” Dixon said. “The key to my survival, I have no doubt, just the physical part of it was that I had never touched drugs in my career, in my whole life, never smoked a cigarette and only drank once in a while and moderately.”

Dixon talked about the excitement of being asked to play with The Guess Who. He jokes, “if you hang around long enough, you get the chance to play with just about everybody.”

“One of the biggest shows we ever had was in Tonawanda, Canal Days,” Dixon said. “They said it was the biggest show they’d ever had. About 40,000 people came out for that one, so, that was fun.”

“I grew up with that music, you know? … They had ‘Shaking All Over’ in ’65, ‘These Eyes’ was in ’68 or ’69, ‘American Woman’ was 1970. They went on till abut ’75 and in Canada it was like they were our Beatles, so, we’d always be looking forward to ‘when’s the next Guess Who album coming out?’ and I learned a lot about singing from listening … so it was a real opportunity to make tribute to this great writer and singer (Burton Cummings). I only got that job, that opportunity, because he kept quitting.”

During that period in the ‘60’s was when Dixon said his influences popped into existence for himself and many other young people. He listed off The Beatles, The Who, Creedence Clearwater Revival and Crosby-Stills-Nash-and Young.

“I loved Mountain, and Johnny Winter, and Jethro Tull was a big, big influence,” he said, listed them off, pointing to a heavy blues influence that was also there when he started collecting albums.

As an artist, Dixon’s evolution has spanned decades. He is now versatile in several instruments, but noted that he only had training in one, piano. He talked about using an acoustic guitar in his solo career.

“The sound of the acoustic is gentler, it’s more versatile,” he said. “You can beat the hell out of it, or you can play gently. Also, it’s more portable. I don’t have to take a whole band along with me if I can play a show with just that. And, really, that was my mission then when I started doing the solo acoustic shows, to choose those songs that people would say, ‘No! He’s not playing that!’ Surprise people. Play things they’d never expect you to take on.”

His latest album, “Whole Nother Thing” is about a year old now but Dixon said he’s proud of it and played four songs from it at the concert.

“It really felt like a step in my progression,” Dixon said. “To let the voice be heard, to tell the stories more in the lyrics and try some different sounds. I really felt at home doing that … It reminded me that the country rock in the ‘70s was another big influence to me… it had a certain country-esque kind of feel … but we don’t hear that kind of music anymore so I guess when I do country it sounds like country rock from the’70s, not like modern country.”

And why does he keep doing it when so many others have handed in the towel?

“Well, I like to say they’re all smarter than me,” Dixon joked. “But this is the way I’m wired. I am a performer; I am a singer. I learned a long time ago that my molecules are arranged around musical vibrations and I’m extremely unhappy when I’m not doing it.”

More about Dixon can be found on his webpage at www.carldixon.com.