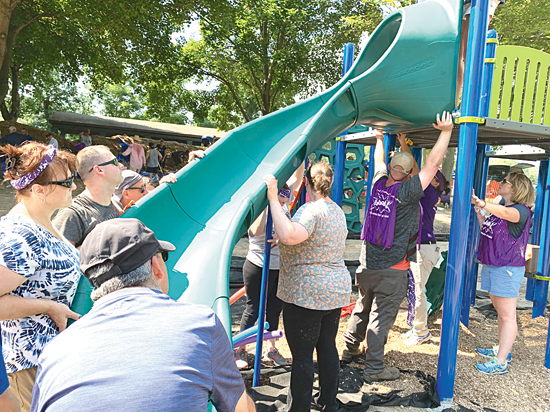 Photos depicting The Mayor's Park Playground on and after build day, Saturday, July 27.

A new addition for the community surrounding Mayor’s Park in North Tonawanda, which all kids and families will want to utilize, is now complete and open for kids of all ages and abilities.

The Mayor’s Park Playground was built through a “KaBOOM! Playground Grant” and the hard work of over 150 volunteers who shaped the park on July 27.

“It’s a great addition to our park department and a great enhancement to Mayor’s Park,” City of North Tonawanda Mayor Arthur Pappas said. “We have brand-new equipment and safe equipment.”

The process to build the park was guided by project managers from KaBOOM! and was truly a community project, according to Parks and Recreation Director Alex Domaradzki.

“Essentially we had a design day where we had about 30 to 40 kids come in, and it was kind of guided by KaBOOM!, and the kids gave their feedback, what they’d want to see for their dream playground,” Domaradzki said. “They talked about it and they actually drew some items that they would like to see. Immediately following that meeting, we had an adult design committee come in and reviewed the kids’ drawings and looked at booklets of actual playground pieces that would potentially match some of the things that the kids wanted to see.”

Domaradzki said that the entire process hinged upon implementing as much equipment that the kids wanted to see in the design for this playground. After a few hours, the committee wrapped up the feedback session and all of it was sent over to a design team.

“They went ahead and designed three different options for playgrounds,” Domaradzki continued. “Then we had a vote on which playground they would like to see out of three options.” 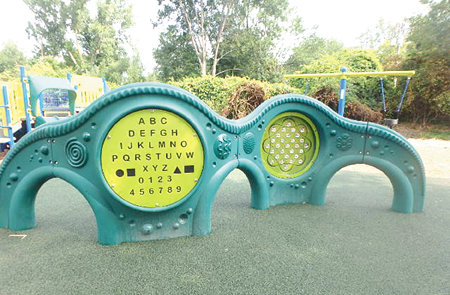 The vote constituted of ballots at City Hall and the Youth Center, as well as online utilizing Twitter and Facebook.

“It was totally community based as far as feedback, design and then building the project,” Domaradzki said. “Over the course of the week, we had three prep days when we put in the main posts to set everything, the structure posts, and then on build day, Saturday the 27th, 150 or so volunteers came in and put everything else together. Put the woodchips in … it was a lot.”

Volunteer day was really great, said Domaradzki, saying again that all of the credit goes to the people in the community.

“It was something I was looking forward to the most,” he said. “Outside of seeing the actual playground done, just watching a whole community of people come together for one purpose, and to kind of leave a long lasting impression on a park for kids, for generations, to play on … watching this whole park fill up with volunteers that were really working hard, between mixing concrete to raking and shoveling mulch, and putting pieces together, and holding stuff up, and bolting it in place, it was just really great.”

Domaradzki told The Tribune that it was really no surprise the community could commit themselves to this addition at Mayor’s Park.

“The grant was pretty much outlines the steps that need to get done and it tells you this is a community based program. So, you need to get ‘X’ number of volunteers to do this and just knowing how the community rallies together for so many different things, we knew it wasn’t going to be an issue,” he said. “We had about 20 people step up right off the bat from the beginning of the year all the way through this process as our actual planning committee that met every single week on Mondays and planned stuff out, did fundraisers, did so much leg work … then obviously without the 200 people who came throughout the week and put it together (this couldn’t have been done).”

One of the aspects of this particular playground in North Tonawanda is its commitment to be a place where kids of all abilities, even those who are wheelchair bound, can come and play and find the equipment that suits them.

“We have 13 playgrounds in NT,” Domaradzki said. “This is the only playground that has this rubber surfacing, and point of this is it’s easy for wheelchair access. This whole project is built around accessibility. Anyone in a wheelchair can come through the path that weaves through.”

Domaradzki pointed out different places where kids could hide in, play on, an even spin in around the playground.

“That was part of the community feedback,” he explained. “When we did our design there was a loud spoken desire to make sure we’re inclusive with what we have, so, we picked out some pieces that would facilitate that. That’s why the path leads you all the way (from the entrance) to the zip-cruise.”

Following the grand opening held on Aug. 14, kids and families are now welcome to play.