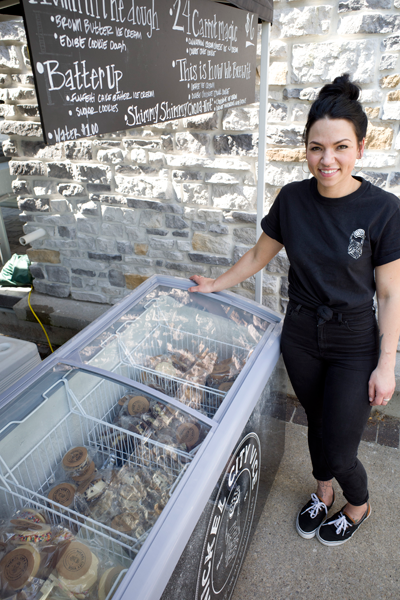 Summertime’s here, and those who need something to keep them cool can look out now for a locally owned popup business.

“It’s been in the works for a while, but I just started this summer,” she said. “I went to culinary school and right now I’m a cake decorator, but I realized it was not what I wanted to do forever. ... I love making ice cream, I love making cookies, so I thought, why not make ice cream sandwiches and see how it does?”

Her business has fed two passions: the desire to be her own boss, and to “put my twist on something” creatively. She’s making the rounds with her cooler and popup stand at local events.

“I make all the ice cream from scratch. My most popular right now is the edible cookie dough – it’s called Rollin’ in the Dough – and cake batter, which is called Batter Up,” she said.

The edible cookie dough includes brown butter ice cream in the middle. It illustrates her desire to give her customers something they can’t find anywhere else.

“That’s what I like about it. I can change them up. It’s mine, so I can do whatever flavors I want, see what sells,” she said.

She even tried a chicken and waffles flavor once just to see how it went. (It was a no go, she said, but to paraphrase Thomas Edison, Goris didn’t fail, she just discovered a flavor that didn’t work.)

Goris said she has two coolers of her product in small shops right now, but most of her business will come from the “pop-ups,” such as Food Truck Friday on Aug. 2, at Kelly’s Country Store. “I’m going to be pretty much at the Outer Harbor all summer,” she added.

In addition to Food Truck Friday, Nickel City Vice will pop up at Jack Craft Fair Aug. 3 in Buffalo’s Outer Harbor; Big Bounce America Aug. 10-11 and 16-18, also in the Outer Harbor; and at the Elmwood Arts Festival in Buffalo Aug. 24-25. 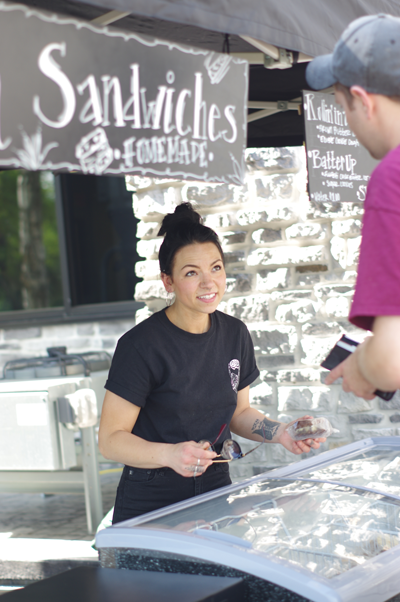 Heather Goris of Nickel City Vice was on hand at the Grand Island Holiday Inn Express for the hotel’s first anniversary party. (Photos by Larry Austin)