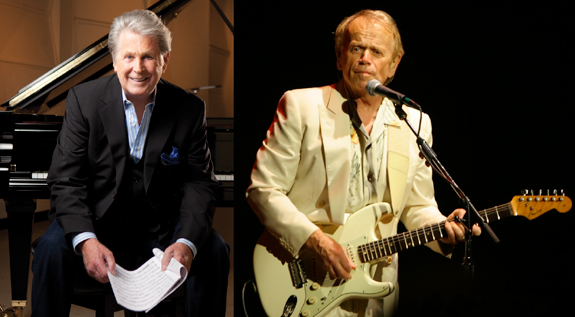 Two of the original Beach Boys - both musical legends in their own right - will hit the stage when Brian Wilson (left) and Al Jardine visit Artpark in Lewiston on Aug. 7. (Jardine photo by Trisha Campo)

With a rested Brian Wilson ready to resume touring, Lewiston is eagerly anticipating a Beach Boys-inspired concert at Artpark.

“Brian Wilson presents Pet Sounds: The Final Performances” is scheduled for 8 p.m. Wednesday, Aug. 7, inside the Mainstage Theater. The concert is a makeup, as Wilson was forced to postpone his early summer dates, including a June 15 gig at Artpark.

Some would say “Pet Sounds” was Wilson’s response to The Beatles. All Music called “Pet Sounds” “The best Beach Boys album, and one of the best of the 1960s.” The L.A. Times said the 1966 album is “Hopeful, melancholy, exuberant and nostalgic.” It certainly marked a sharp turn in the band’s career and musical direction.

Artpark & Company Director of Marketing and Sales Dave Wedekindt said, “The word ‘legend’ is perhaps overused these days, but it is entirely appropriate when describing Brian Wilson and his musical genius and aura. He has assembled a top-notch band, and it will be special to experience the final area performance of the ‘Pet Sounds’ album, plus many more Beach Boys favorites.”

“Pet Sounds” is highlighted by songs “Wouldn’t It Be Nice” and “God Only Knows,” as well as “Sloop John B,” which was written by Jardine, one of Wilson’s oldest friends.

Ahead of the original Artpark show date, Jardine spoke with NFP about Wilson, the Beach Boys, “Pet Sounds,” and a surprising connection to Western New York.

Q: What can you share about the years you spent in Rochester? (Jardine was recently inducted into the Rochester Hall of Fame.)

Al Jardine: The Rochester Hall of Fame is an amazing program. I was so shocked. I couldn't believe how great it was.

And I went back to my old home in Somerville. Right at Lake Ontario there, there's a little marina; and I lived right on the water at the marina with my parents. My dad taught at RIT, and was a professor there. And I grew up right on the water there. It was fantastic. I learned how to swim right there.

They took me back to my childhood home and we did a karaoke video – you should check it on my website. It's really funny. We're singing little do scoop and “Help Me Rhonda.” It's just an amazing little video that the station did for me there. …

I performed “Rhonda” and a couple of songs from my new album, “A Postcard From California,” at the event that evening. It was quite impressive – it reminded me of our Rock and Roll Hall of Fame induction in 1988 for the Beach Boys. It was very professional; very, very well done. I was very happy I attended.

Q: Tell me a bit about the show coming up at Artpark, playing with Blondie and with Brian, and doing “Pet Sounds” in 2019. What sort of reaction do you guys get from the crowd, and what do you enjoy about playing this album?

We perform the album from top to finish, beginning to end, note for note. And Brian and I sing the crap out of it. And Matt Jardine, my son, does a wonderful job reproducing the falsetto parts that Brian used to sing. So, it’s amazing. And the rest of the band is superb; all the players are all veterans who’ve been doing this with Brian for years. So, it’s quite an accomplishment.

Al Jardine: Well, he means everything to me. You know, we grew up together. We went to school together. Started the band together. We’re very close to one another and share an awful lot of memories. (Laughs)

Unfortunately, he has some health issues. His back has been bothering him for years, and he needs a little help getting on and off stage. But other than that, he’s terrific. And we have a great rapport with one another.

He’s the real thing. Let’s put it that way. We didn’t appreciate it at the time, but it’s become pretty clear to everyone that he’s an exceptional human being, and a wonderful, wonderful arranger/songwriter/producer, you name it. He owns it. Even Paul McCartney bows down to Brian and his compositional genius. And we respect Paul a lot, too, of course.

It’ll be a moment to remember. I recommended it highly to everyone.

Al Jardine: We didn’t like it. Still don’t. It’s just what it is.

You get typecast with a name like that, and you can’t grow. It’s difficult to grow beyond the name.

When you give somebody a name – like The Zombies, for instance – I’m sure they hate being called The Zombies. But at the time it was funny. It’s kind of cute, you know? You know, we might have one or two hits and that’ll be the end of the story. But then you start growing musically and you’re stuck with the name, you see.

And, in fact, we’re doing a tour with The Zombies in September. The Beach Boys and The Zombies: What kind of crazy collaboration is that, right? Doesn’t really describe the music at all, does it?

It’s just what it is, and that would be one of my earlier memories.

Q: How did the band get its name?

Al Jardine: The label. We couldn’t think of one. Well, we actually did have a name, but it stunk, also.

I bought some shirts for the band. Brian and I went out and bought some Pendletons. There’s a woolen shirt from Oregon called the Pendleton. And so we called ourselves the Pendletons – and that didn’t go over too well with the label. They said, “No, we’re going to call you The Beach Boys.” And pretty soon the record was out, and that was that. A recording called “Surfin.’ ” And, of course, we sang about surfing for a while.

In fact, my parents, the Jardine parents, rented the instruments to make that very first recording. That was our first song. And it became a hit in L.A. and Detroit and places we couldn’t even imagine. Phoenix, Arizona. Can you imagine a surfing song in Phoenix?

The thing that people loved was the sound of our voices. You know, it was a magical quality of The Beach Boys’ voices. And we would just happen to sing about surfing. We didn’t necessarily plan to be writing songs about it forever, you know, but it just stuck. Those beautiful harmonies that we created became universally adored, I guess you’d say, or accepted as high-quality – which it was, of course.

When you hear “Pet Sounds,” you’ll hear those same voices. Those same great voices are in there. And then, of course, there you have the name again, right? The Beach Boys.

It is what it is. It’s one of those moments where you go, “Well, we could have been called The Zombies.” So, I guess we’re lucky.”

Q: You talk about the name; you talk about the music; you talk about the vocal qualities and the harmonizing. Your band is in such rarefied air, to have sold 100 million albums. And, obviously, there’s been comings and goings, and there’s been different variations of The Beach Boys over the years. But what is it like to live in a world where you are that successful, and that popular, and you’re selling so many records? How easy – or challenging – is it to be a musician when you’re having that incredible level of success?

It is challenging to reproduce it. And, in that sense, when we go out and play “Pet Sounds,” that’s a challenge every night. Recording it was no big deal. But having to reproduce it is a big deal, because it takes you – because you have to move back 50 years with that one. Or more.

Q: You sound very down to earth. You sound very grounded. Someone who's been as successful as you have maybe wouldn't be that way. To what do you attribute that fact?

Al Jardine: well, I grew up in western New York state, you know.

Al Jardine: (Laughs) I had good parents and good values and appreciated what I had, pretty much. I was able to learn.

I was very fortunate: Brian and I were classmates. I guess it was destined to be, you know? But I learned a lot from Brian. I learned almost everything from Brian. I was just a lowly folk singer. I loved The Kingston Trio. That was my idea of great music – and I still do, by the way. Those guys were heroes. They still are my heroes. I learned to sing primarily through their music. And then Brian just completed the whole thing for me.

And then I gave it back to Brian, in the form of “Sloop John B.” And I said, “Brian, this song's gonna be a hit. This could be a big record for us, because our harmonies fit this song perfectly.” So, I was able to give back a little, which is nice. And I rearranged it a little bit, and made it more of like a Beach Boys song. Now people think it's our song, right? But it gave “Pet Sounds” some legs, because “Pet Sounds” didn't have a hit record on it; it didn’t have a hit song on it. So, “Sloop John B” kind of filled up that void. It really worked.

Brian Wilson of The Beach Boys brings the “Pet Sounds: The Final Performances Tour” to the Artpark Mainstage Theater at 8 p.m. Aug. 7. Joined by original bandmate Al Jardine and guitarist Blondie Chaplin, Wilson will perform the “Pet Sounds” album in its entirety along with deep cuts and hits. For tickets, visit www.artpark.net.

Al Jardine is online at www.aljardine.com/.