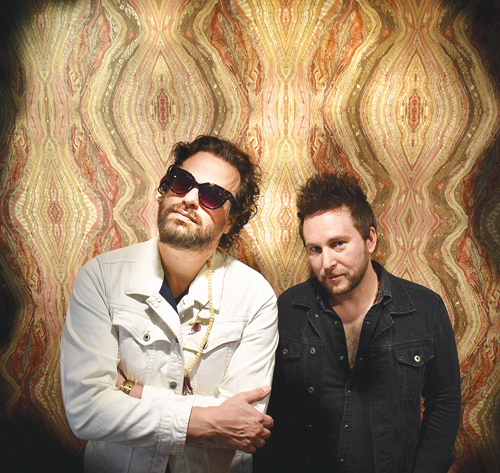 Two national recording acts will be in the River Region next weekend – but not in Lewiston.

The event is co-founded by Ray Barry of Barry Entertainment, a well-known local musician. He said, “There are so many great summer festivals in Western New York, and we want to continue that tradition by bringing one to our hometown. We have an amazing lineup of national and local talent, and this is a family-friendly event. We’re so excited to showcase our beautiful town.”

Village Music Festival begins at noon in Falkner Park. It boasts a dozen bands, plus craft vendors, food, drinks and games. Tickets are $10 in advance and can be purchased online at www.villagemusicfest.com, or in person at Lewiston Music or Riverview Fitness.

Michael Glabicki will headline Village Music Festival. The artist has performed many times in Western New York with Rusted Root, but is now pursuing music with a new band – the aptly named Uprooted.

The voice behind hit song “Send Me On My Way” said, “It seems like it’s getting less and less likely that Rusted Root will get back together. It’s fine. I’m totally OK with it. It’s just, that’s sort of where I see it now.”

“I think it’s just where I’m supposed to go, really, is what it feels like. It feels like a natural transition,” he said. “And this group of musicians showed up at the right time, and to take it to the next level. And I’m just slowly realizing that, you know, there’s a lot of letting go of the past 30 years and all of that. But, you know, it’s a magical time right now. And I don’t think I felt that way, all the way back – 1990 would’ve been the last time I felt that way.”

Glabicki said he stayed with Rusted Root long past 1990 because, “That was part of the excitement, was the fact that maybe this could work out. So, you keep being honest with each other, and you keep trying to communicate what it is that you’re hearing, and what it is, technically, maybe that’s not working out, or those kind of things. It’s more like a drive – just like trying to keep the family together.”

Try as he did, Glabicki said, he “just kind of realized it wasn’t getting better,” and “it’s just time to go.”

Since becoming Uprooted, so to speak, “It’s been awesome,” Glabicki said. “I mean, it’s really just sort of like it’s been there, you know? And I have been playing with Dirk and Zil in Rusted Root for many years now. So, those things were being explored. It was just not consistent with all the members. So, it was kind of like just wanting to settle into this new thing, so that it could then evolve into a much greater thing. And that’s where Uprooted came in.

“It sort of settled the foundation of the music. And now I’ve been building on top of it … gradually. … You build on top of that foundation, and you start to explore. And once the foundation’s set, you can really start to do some really cool stuff with everybody, and everybody doesn’t have to think about it anymore. So, when we’re up on stage, now, it’s just like I know whatever’s happening in the moment is the right thing. And I just go with it. So, it’s no thinking whatsoever. It’s letting go of the mind and letting the soul and the body kind of do the movement and the work.”

Taking it one step further, Glabicki said, “We’re in the studio right now; we’re working on a new album. And we should have our first two singles out soon. Not totally sure which ones they’re going to be yet, but we’re going to start releasing some singles and getting some action going on them.”

He described this music as “different, but the same.”

“I don’t know (laughs). It’s hard. It’s hard,” he said. I wouldn’t want to sort of pigeonhole any one song or a group of songs. I would say it’s more group-oriented. It has a lot more of sort of the light energy in it, the healing energy in it, like early Rusted Root. Maybe back to ‘Cruel Sun,’ kind of thing. But as far as the musicianship, the arrangements are just, like, on another level. That’s sort of all I can really say about it.”

In Youngstown, Glabicki will perform with Miller. He said the show would be “An extremely free one. I think we’re gonna rock out, because I play kick drum, acoustic guitar and sing. So, it’s a pretty rocking duo. But because it’s just the two of us, we’re really able to do whatever comes to my mind. He’s sort of like my psychic sidekick, and I can do whatever I want and he follows, just because he gets really into my mind and understands where I’m going. Because of that, it’s just really free and very improvisational. Very powerful stuff.”

Also on the card is popular Western New York singer/songwriter and guitarist Scott Celani, a mainstay on the Buffalo music scene.

The musician’s website notes Celani has performed at more than 150 colleges; shared the stage with acts including Goo Goo Dolls, Hootie & The Blowfish, REO Speedwagon, Our Lady Peace, Jimmy Eat World and Sam Roberts; and released four critically acclaimed albums: “Them Apples,” “Saturday,” “Making a Scene” and “Wired for Nostalgia.”

“I’m actually about to release some brand-new music,” Celani said. “My newest single, ‘Home,’ will be released next month along with a brand-new music video to go with it. I co-wrote it with a very accomplished writer out of Atlanta named Alan Schaefer. We’re going to release a new single every few months and then culminate it with a full record release next year. I also co-wrote one of the other upcoming singles, ‘Michigan Trains,’ with Marty Dodson out of Nashville. Marty has a bunch of No. 1 hits to his credit.

“Also, we recently played some great high-profile shows in the WNY area at Larkin Square, M&T Plaza, the East Aurora Music Festival and the Totally Buffalo Festival. We’re playing the Music is Art Festival in September, as well.”