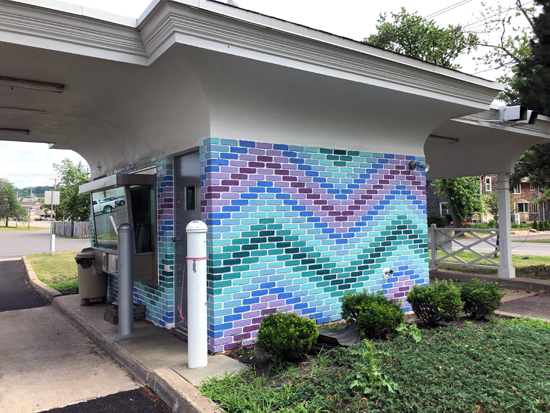 Stephanie Casale is converting the former bank drive-thru on Cayuga Street into an art studio. Her colorful design drew rave reviews from both Mayor Anne Welch and fellow artists at a meeting held on Wednesday.

Lewiston, as a work of art: Mayor brings art leaders together to work on collective ideas, programs

Group thinking of ways to market Lewiston for its artistic offerings

Lewiston is the summer events capital of the county. People come from around the state – sometimes farther – to explore an array of festivals, attend a concert or two, enjoy the waterfront and pay homage to history at a handful of monuments. From the first sign of spring through the last semblance of summer, Center Street is bustling and restaurants are overflowing.

And yet, as Lewiston continues to make headlines for its many offerings, an important piece of village culture is being overlooked: the artistic community.

Inasmuch as Lewiston’s top attraction is called Artpark, its art festival is hailed as one of the region’s best, and top WNY high school students create large chalk murals on streets each August, people have overlooked the fact this village is a year-round arts destination.

So said Mayor Anne Welch, who held a roundtable Wednesday with about a dozen local artists, crafters, sculptors and metal workers. She is seeking a way to bring the arts community together to promote its offerings.

“I think that, obviously, Lewiston is doing great. We have great restaurants, great shops, great waterfront. And we also have great art,” Welch said. “We’re getting more and more art in the village, and I just wanted to showcase what we have, and have you brainstorm – if anybody has any ideas what to do.”

She added, “I just thought we could maybe talk a bit, to use our arts as a destination to Lewiston. I mean, we have been a draw for so many other things. … We are a destination for art, also.”

What Needs to Be Done

Inspirations on Canvas owner and artist Kathy Pignatora said people often come into her store and ask, “ ‘Where is all the art?’ ” They don’t have a ready resource that directs them to the village’s monuments, sculptures and murals.

Lewiston Council on the Arts Artistic Director Eva Nicklas said, “One of the things that we’ve often talked about at the Art Council was, because we have such a rich and vibrant arts community, and sculptures, and shops, and everything, that it would be a really good idea to do something similar to what we do with the Cross Border Blues brochure, and have a brochure and a website that lists a map of where you can see all of these sculptures. … Really put it all together, and put it on a website, so people know where to come if they want to see Susan (Geissler’s) sculptures or any sculptures right in town.”

Artist and Artpark Director of Corporate Sponsorships Maureen Kellick said, “We need to start to get a rhythm of opportunities to come to the village for. So far, the library has been an exhibit hall. This building (the Red Brick), I think, has great potential for being a place where the public could come in and out.”

She added, “There isn’t any central stroll, like the art walk they do in other towns on first Monday or first Saturday. It would be nice to have a start, or identify places right here in the village and launch it at the end of the summer when people are still coming.”

Welch said, “You can see the draw the Art Festival has had for years. They come by the thousands for that art festival. So, people have that interest. We should really try to get them to come all year round to see what we have. Whether it’s pieces on Center Street, or (in stores), or in the park.

“We’d like to see Academy Park all redone so that people can actually go there, stroll around. We want to take the bleachers down with the bandshell, so it opens that whole park up. If we put a walkway around the park, people can scroll around it and look at these artists sitting there painting or sculpting or doing clay. I think we can do something like that, that would draw people at any time – not just at a festival.”

Kellick said, “With all the artists you have in the community, and young artists that are now coming in, instead of leaving maybe, the opportunity to surface, to show their art, if there was one area or one coordinated monthly event in certain seasons, I think it would be a good opportunity for the artists. Because, like you said, then you know where to go and find these people.”

Welch said it would be nice to showcase youth, too, because “there’s some really brilliant kids that are really good artists. And so, maybe, they get to have an art festival of their own to showcase their work?”

Pignatora said, “I think our job, as artists, is to inspire.” 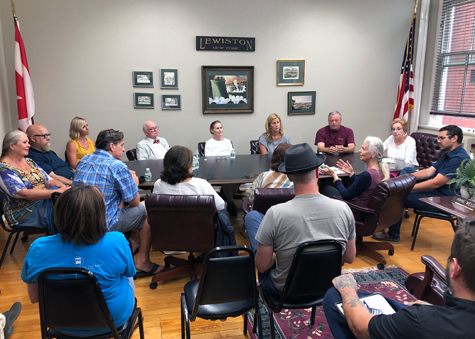 What Is Being Done Now

Welch identified Michael Hibbard as a key person in showcasing the artistic community.

Hibbard owns Gallo Coal Fire Kitchen and recently took control off the property at Center and North Fourth streets. He and his art partner, Dan Buttery, created a large metal work that hangs inside Lewiston-Porter High School. Their work also is on display at Gallo and inside the Brickyard Brewing Company.

Welch said, “Mike and I talked that he’s going to redo his property (at Center and Fourth), and he wants to leave the corner pergolas. And he said, ‘I don’t know what I’m going to do with it. I haven’t figured out a use for it.’ And I said, ‘Well, why don’t you glass it in, and then display area artists in there?’ You know, once a month, you have a different artist in there, or a couple; because he wants to put his sculpture in the courtyard.

“And like I say, people will come in. And, as they go to his restaurant and walk around that courtyard, or Brewed and Bottled, you can actually see artists, what they have to offer in this village. Like, say, Kathy has a couple of her paintings there. And then they note, ‘Wow, she’s really good. I’m going to walk up to her shop.’ Or different artists have different things in there, and people that are going to his restaurant or Brewed and Bottled can actually look at it and say, ‘Wow, I didn’t realize that all these people are from here; this is really interesting.’ And it gives them something to do, because he’s going to have outdoor seating.”

Welch also noted Hibbard’s connection with the Castellani Art Museum at Niagara University, where he sits on a community relationship board.

“And one of the things that I’ve done quite a few times with public municipalities is that, when we’re doing sculpture work, once a year, they have a commission that comes up, and you submit to the commission. It was all mostly sculpture work, so large-scale pieces. But, we could have, whether we put up concrete pads in strategic places on Center Street, and then we can just rotate work out every year. And then whoever’s on the board would be the judge of who would be accepted into that. (It) is a great thing, because it creates a walking (tour). … It’ll drive people into the businesses and see the work.”

Welch said, “We have to move forward with new ideas and places (for people to visit), not just for the history of Lewiston.”

Other ideas included working with the Niagara River Region Chamber of Commerce and the Niagara River Greenway Commission to establish a local artist/art trail, similar to the Niagara Wine Trail; partnering with the Discover Niagara Shuttle; redoing benches and bike racks; adding lighting to highlight public art; identifying future mural sites; and adding more art into the International Peace Garden next to the Frontier House.

Niagara River Region Chamber of Commerce President Jennifer Pauly said, “Not only do we have the artists here, we also have a new tattoo studio with tattoo artists. We have a number of graphic artists that are hosted here in the Village of Lewiston, as well. So, it’s a different type of art. And then a number of musicians, as well. I’m not an artist, but we have a huge music scene and theater, as well. I think this is great, because it can branch out into so much more, and there’s so many talented people that have their business here or live here.”

Nicklas said, “I just love, love, that Lewiston is so strongly identified as an arts community. I think that’s something we can be extremely, extremely proud of. I know I am.”

Deputy Mayor Vic Eydt applauded the diversity of projects coming from the roundtable participants. He said, “Getting together, putting our minds together, I think we can make this an even better place to live and showcase what we have.”

Welch said she intends to meet with the artists on a regular basis to continue coming up with ideas to promote the village’s arts community.

“People will come here just to see the arts. I think it is a draw, and I think we need to work on that,” she said. 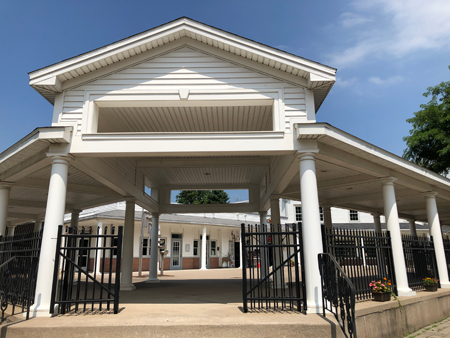 Michael Hibbard is revamping the corner property at Center and North Fourth streets, and is expected to showcase art in the courtyard. 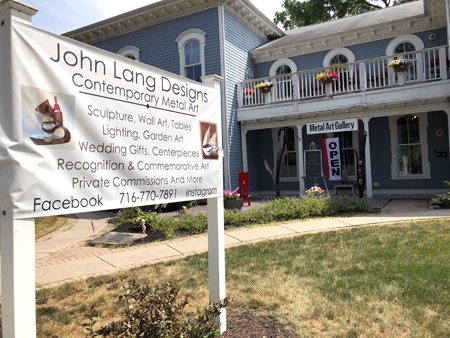 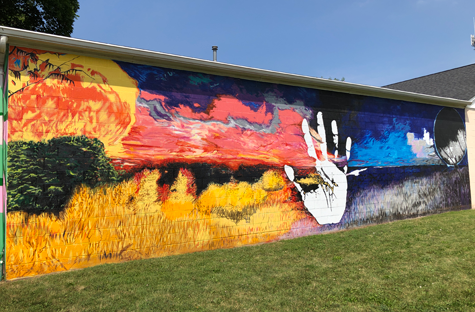 Thomas Paul Asklar has painted large murals in the village, most notably this one, which exists on the back of the Stuart Sports building. 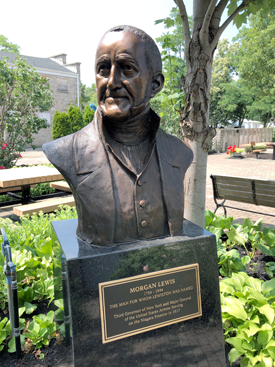 Susan Geissler has three monuments in the Village of Lewiston, including this one of Morgan Lewis, which sits in the International Peace Garden.