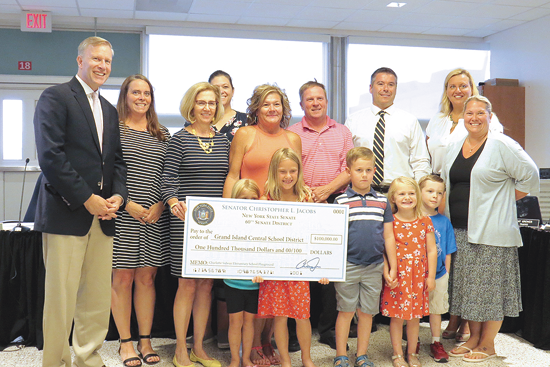 It was a busy session for the Grand Island Board of Education this week as the board held its annual reorganizational meeting on Monday.

New trustees Jay Grover and Nicole Novak took their seats at the board for the first time following the results of the May 21 election.

New York State Sen. Chris Jacobs was on-hand to deliver an oversized check of $100,000 from the state of New York to the Grand Island Central School District for the construction and installation of a brand-new ADA-compliant playground at Charlotte Sidway Elementary School.

The project had been spearheaded by the Sidway Playground Committee, which was formed in October of 2017 in effort to replace the current playground, which is over 25 years old and has been deteriorating in recent years.

After meeting with a number of potential developers, the playground committee decided on a plan that will be developed by playground developer GameTime. The playground will actually be two different structures in order to cater to all the different age groups of the children at Sidway Elementary.

Speaking on behalf of the playground committee, member C.J. Gerard detailed the processes and developments that had led up to the July 8 announcement. After countless fundraisers, and applying for community grants, Gerard contacted Jacobs.

“One phone call I certainly don’t regret making, I called Sen. Jacob’s office and said, ‘Chris, we need your help. … A few weeks later, we got an incredible call (back) that he was able to help,” Gerard said.

During a short speech, Jacobs congratulated the playground committee and the Sidway community for their collaborative efforts.

“It’s an honor to be a part of this. This is really, in my mind, how government should work in terms of being a partner, and that’s what we are,” Jacobs said.

The state funding pushes the total the Sidway Playground Committee has raised to $165,000, the remainder of which they’ve been able to gather through various fundraisers and donations from the Sidway community.

In relation to the playground announcement, the board approved the selection of Benchmark Turnkey to provide environmental compliance and remedial services at the Sidway playground site.

Last year, elevated levels of arsenic were identified in soil near the Charlotte Sidway playground during a comprehensive air and soil study. It was conducted to determine the affected range of pollution generated by the now-closed Tonawanda Coke plant.

Assistant Superintendent of Business and Finance Rubie Harris said that, in total, three professional services firms had been interviewed and that the decision had been based on Benchmark’s prior experience, cost of completing the excavation and remediation of the areas, and timing of completion/resources to complete work.

Harris noted that, given the timeframe on the Sidway playground, the remediation efforts would need to be completed prior to the beginning of construction.

The estimate provided by Benchmark was $93,000 for the testing, excavation and disposal of contaminated soil up to a depth of 12 inches. Harris noted the number could be higher or lower depending on the depth of removal required.

Grand Island Central School Superintendent Brian Graham added, “Not only did Benchmark come forward with the most reasonable bid, but it also was the company that had a tremendous amount of expertise in Western New York. (Also) the letters of recommendation we were able to read were outstanding.”

A statement provided to the board said that, not only has Benchmark done work with various schools in this area, but also it has “the in-house equipment and staff to be able to establish a favorable timetable for completion within a reasonable cost.”

Benchmark representative Tom Forbes said the first step would be to perform test pit excavations to determine how deep the arsenic impacts are. He said Benchmark could begin the study within a week of being approved and could have the analysis back in as little as seven to 10 days.

The board approved a number of instructional personnel appointments, including:

After some discussion, the board approved its current two-meeting-per-month schedule going forward for the year, with a proposed option with fewer dates.

Vice President Sue Marston was firm that a one-meeting-per month schedule would be ineffective.

“It’s not productive to be sitting here, once a month, until 10:30-11. It doesn’t work out well. I strongly agree with the two meetings a month. I think we owe it to our community to meet more often,” Marston said. Trustee Glen Bobeck seconded the motion.