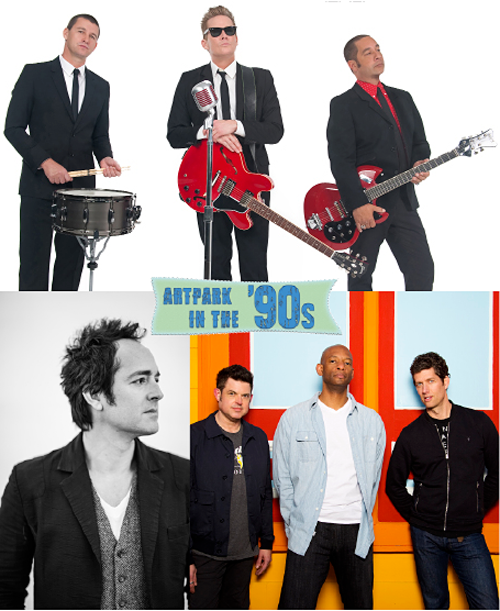 Clockwise: Sugar Ray, Better Than Ezra and Emerson Hart. The '90s stars will perform in Lewiston on July 9. (Photos courtesy of Artpark & Company)

The 1990s was the decade that brought us “Beverly Hills, 90210”; Nirvana, Pearl Jam and Stone Temple Pilots; Disney’s original, animated “Aladdin” and “Lion King” movies; Leonardo DiCaprio, Celine Dion and the “Titanic”; and not one, but six really good “Friends.”

It was the era of MC Hammer and Vanilla Ice, Zack and Kelly, Tupac and Biggie, Bill and Hillary – a worthy pop culture sequel to the ’80s, and a time when people rallied together to defeat Y2K.

At least that’s how I remember my teenage years. …

Sadly, for all its nostalgic value, this 10-year period of time really hasn’t had a John Travolta-style comeback, or come back in vogue like the ’60s, ’70s and ’80s.

In Lewiston, Artpark & Company has booked ’90s acts, but not nearly as often as bands from those other decades.

As cassette tapes were replaced by compact discs, and hours of varied music videos turned into big blocks of boy band appreciation on MTV’s “Total Request Live,” some soured on the ’90s. Moreover, with the advent of file-sharing and the rise of the internet, musicians didn’t necessarily have to prove their mettle or make a great album to get discovered. Someone could, say, just randomly put five good-looking dudes together and shoot for the fences.

Or do the “Macarena.”

That doesn’t make for lasting success.

But hope is not lost.

Over the past few years, Artpark has expanded its offerings to bring in more people. In doing so, venue management has cast wider nets for musical acts – including more from the ’90s. 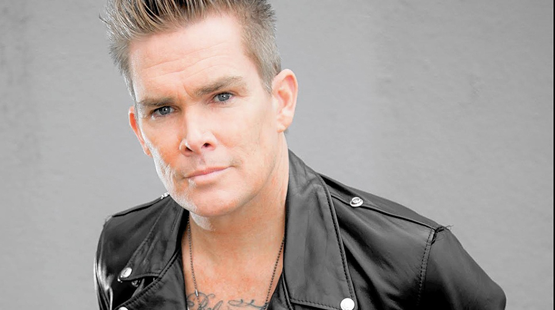 On Wednesday, Artpark will welcome Third Eye Blind (“Semi-Charmed Life”) to its “Coors Light Concerts” series. Then, on July 9, the venue welcomes ’90s stalwarts Sugar Ray, Better Than Ezra and Emerson Hart of Tonic to “Tuesdays in the Park.”

Director of Marketing and Sales Dave Wedekindt said, “In recent years there has been some nostalgia for the bands of the ’90s/early ’00s, so we saw this as an opportunity for the ‘Tuesdays’ series. It also helps bring some new people to Artpark who may not be regulars and/or necessarily interested in the more traditional ’70s/’80s rock offered on Tuesdays.”

In a phone interview this week, Sugar Ray’s Mark McGrath said, “The ’90s – the nostalgia of the ’90s – are full-blown right now. …

“A lot of people think that’s a bad word and run away from it. But if you look up nostalgia in the dictionary, it is nothing but positive words and phrases.”

McGrath explained, “The ’90s was kind of the last decade that produced legacy bands. There’s going to be a whole new wave since the internet kind of took over. But the ’90s was the last decade. So, I’m sure Artpark will start doing more in the future.”

He noted, “These sort of nostalgia packages – these little rock packages like we’re doing – are kind of unique.”

“We’ve been doing a lot of corporate stuff, and it’s a lot of fun,” Hart said. “We give people like 75 to 90 minutes of just straight hits, with other songs in there. And it’s been a great show.”

The trio will likely jam together at some point on the Artpark Amphitheater stage. If not, each individual set will provide fans with more than a taste of what the ’90s offered.

“It’s a fun package, man,” McGrath said. “I’ve known these guys for a long time. And to kind of play these songs all together on one stage, you kind of forget how many songs these bands had. Obviously, you remember all the hits – you know, the ‘Flys’ of the world, ‘If You Could Only See,’ ‘Good’ – but you forget all the other songs, because, when these bands were popular, a lot of their catalog was getting played on the radio, as well.

“So, all three of these bands together are a perfect example of a band to go, ‘Oh my god, they sang this song, too!’ And, ‘Oh, and that song, too!’ It’s almost like a greatest hits tour. …

“Obviously, our sets are truncated a bit, because we got to get everybody up there playing. (But) the sets are packed with songs you’re gonna be familiar with.” 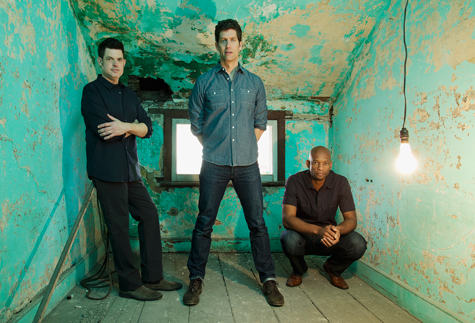 “But I like going out with people that I really enjoy and respect and have fun. And Mark and the Sugar Ray guys, we’ve toured with him in the past. And Emerson from Tonic is just the sweetest guy. So, just for us, we’re going to do a package that’s just a blast. And it’s fun.”

He added, “I love the triple-bill. We’re doing quite a few shows with us and Sugar Ray. The people in Lewiston are going to hear tons of hits, they’re going to see some interaction between the bands – I’ll get up and sing a song with Sugar Ray, and vice versa. …

“We’re gonna play the hits. We’re gonna do some deeper tracks for some superfans. And then, every year, we’re always doing some new covers – some fresh spins on things. Doing a mashup, of sorts – usually something old and something new.

“I love doing a cover, and then you go into another song that has the same chords, or is the same feel. Because so many songs are very similar. And it’s kind of fun to play a song for people, that it might be a hit, and then they don’t realize, ‘Oh, it’s the same chord; it’s the same vibe as a classic hit.’ And you’ll see that realization pop open their eyes.”

She reminded me the 2016 season also included Ben Harper on a Tuesday, and Ben Folds for a “Coors Light” Wednesday show.

Clark explained, “We are committed to music of all current eras,” and said, “While we say the ‘Tuesdays in the Park’ series identifies primarily with ‘classic rock,’ the term itself has been evolving. To my generation, the ’90s music is the classic rock in a way.

“Most importantly, I would like to stay away from labels and focus on great music for a diverse audience, whether well-known or not. I welcome all to embrace the high-quality bands presented at Artpark, which you may not have heard of, but which I guarantee you will enjoy. Your curiosity will help these bands become the new classic rock, move the music forward, and give you the opportunity to find a new source for personal joy and inspiration.”

Word to your mother.

For more information on Artpark shows, or for tickets, visit www.artpark.net or stop by the box office at 450 S. Fourth St., Lewiston.