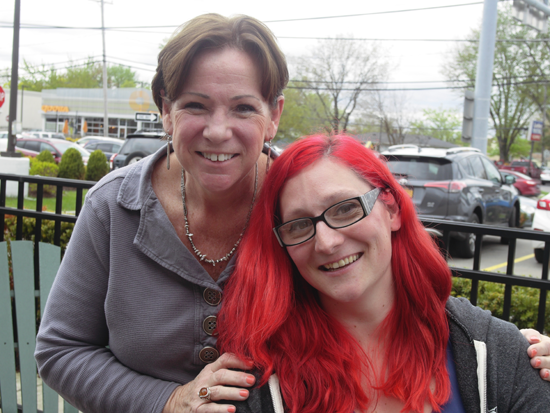 Norine Eaton (left) and Nichole Becker will participate in the third annual Zumbathon from 1-4 p.m. June 2 at the Radisson.

Norine Hibschweiler Eaton, who is being honored as a survivor in Grand Island’s third annual Zumbathon, to be held from 1-4 p.m. Sunday, June 2, at the Radisson Niagara, has had a life full of love and loss, illness, and adventure. In 1979, Norine Hibschweiler went on a “date derby” with a bunch of single friends. The date derby involved visiting bars in Buffalo and collecting souvenirs, such as matches and napkins. For her efforts, Hibschweiler won the distinction of having “the most promising future.”

While participating in the “date derby,” Hibschweiler met a man named Jim Eaton at Cole’s on Elmwood Avenue in Buffalo. Four years later, they were married and ready to start the adventure of life together. They settled down to married life in Williamsville. They had a daughter, Alana, and two sons, Tim and Mark. They traveled the world together.

“Jim was part-owner of Eaton Office Supplies,” said Norine Hibschweiler Eaton. “Some of the trips were business trips, and others were sales incentive trips. We took fabulous trips.” They traveled to such places as Italy, Spain, and Puerto Rico. They also explored Israel, China, Hong Kong, Italy, Spain, France, Germany, and the Netherlands on their adventures, Hibschweiler Eaton said.

“We visited cities. In Nuremburg, Germany, we had a really good tour guide, who was a teacher. He gave us good information and told us what he was taught in school about the Nazis,” Hibschweiler Eaton said.

Hibschweiler Eaton described her husband as “so kind” and “non-opinionated.”

“He was even tempered, bright, and well-read in sports and business. He was an avid golfer. He always had a smile on his face. He was well liked and respected by everyone. He was adored by his employees. He was an awesome dad. He went to all of the kids’ events and games. He was active, involved, loving, and nurturing,” she said.

The adventures, however, were interrupted by a cancer diagnosis. In January 2013, Jim was diagnosed with large B-cell lymphoma. “He went through chemotherapy and, in July, he was told that he was cancer free. He had just turned 60,” Hibschweiler Eaton said. “In August, he had more problems, and he went for a colonoscopy.”

In mid-August, Jim was diagnosed with stage four neuroendocrine cancer. He passed away in October. “It was just a month after a clean PET scan,” Hibschweiler Eaton said.

“We had a good marriage,” Hibschweiler Eaton said. “He was looking forward to retirement.”

Between October 2013 and August 2014, Hibschweiler Eaton said, she too began having troublesome symptoms. “I started experiencing post-menopausal bleeding, and I went to see the doctor.” She explained that this is not normal and that women who experience this should seek medical attention immediately.

She said that she was sent to Roswell Park Comprehensive Cancer Center, where she was diagnosed with Stage 1A uterine cancer. She had a hysterectomy, and she said that no more treatment was required at that point. “The surgery had removed the cancer.”

“That’s when Roswell recommended surgery. In October 2016, I had a lung resection. They cut out a portion of my lung. My uterine cancer had spread to my lungs. It had traveled via my bloodstream,” she explained. She also underwent preventive chemotherapy.

While in Roswell Park, Hibschweiler Eaton said that she was given a little journal, in which she logged what she was eating and feeling. She kept track of the cards and gifts that she received. “I wrote down anything that was positive. It helped to keep the positive things in the forefront.”

Hibschweiler Eaton said that she keeps a gratitude list. When she was receiving chemotherapy, she said that she was grateful that “I’m getting preventive chemo. Jim never had the opportunity for prevention.”

In February 2017, Hibschweiler Eaton was pronounced cancer free. She rang the bell that Roswell keeps in the lobby for survivors to ring the good news that they are cancer free.

Since her recovery, Hibschweiler Eaton has worked at maintaining her health. “Since being overweight is a huge risk factor for cancer, I lost 40 pounds. I am doing my part to maintain my health with diet and exercise.” She engages in such activities as kayaking and bicycling.

“I kayaked in Florida in a beautiful nature reserve,” she said.

Hibschweiler Eaton tells people who ask her how to maintain their health after a devastating illness, such as cancer, “Listen to your body and do your part for your health.”

She says that she also enjoys life by spending time with friends. “In 2012, I went on a riverboat cruise from Paris (France) to Prague (Czech Republic) with 19 girlfriends. It was the summer. We learned a new card game. We laughed for 10 days. We had such a good time. It was good group to travel with.”

The organizer of the Zumbathon, Nichole Ryan Becker, a Zumba instructor who teaches 19 classes a week, said that Jim and Norine Eaton were friends of her family. She said that, in January, when she started planning the Zumbathon, she decided that the money raised at the Zumbathon would be donated to Relay For Life in honor of Norine and in memory of Jim.

Seven Zumba instructors will lead participants through their moves for two hours. “All of the instructors are volunteers,” Becker said. There will be a basket raffle, and a few venders will be available.

Dancing nonstop for two hours is not mandatory, Becker said. “Even if you can’t dance or you don’t do Zumba, come. This is all for charity.”

“It’s pretty awesome. I feel honored to be part of this.”

Admission to the Zumbathon is $15 in advance and $20 at the door.