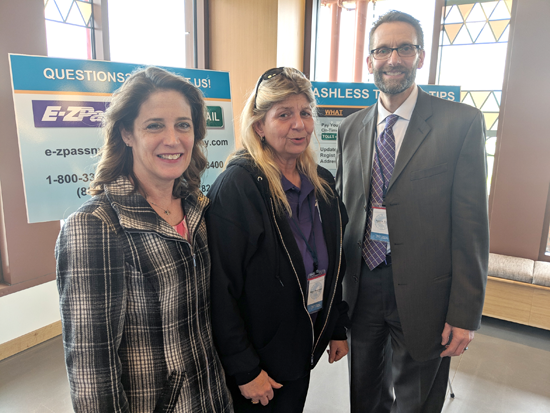 He outlined at a press conference plans for new cashless tolling systems, like those at the Grand Island Bridges, slated for Lackawanna and Williamsville toll barriers.

“So as part of the cashless rollout, which we now have 40% of our system completed, with the expectation that cashless tolling will be across the state by the end of 2020, we’re doing a series of community outreach events across the State of New York beginning right here in Grand Island,” Driscoll said. “Cashless tolling is a critical part of our infrastructure plan to modernize the Thruway system. Here at Grand Island, we have had over 20 million vehicles thus far utilize the system. It’s been very successful. And that represents with the other barriers downstate about 40% of the entire system. So the remainder of the ticketed system, as I said, will begin later this year through the end of 2020. This is a very important piece of what we want to make sure we do, which is communicate with our customers. Cashless tolling is here to stay. It’s going to continue to grow. So it’s events like this that we’re here to educate, and also to discuss with folks here in Western New York what the future looks like.”

Asked how the cashless tolling rollout worked on the Island, Driscoll said, “In general, I think it’s gone very well. We’ve had nearly 24 million transactions, successful transactions, and less than 4% of those have turned into a fine associated with that. So from that standpoint, it’s been very, very successful. And that’s why we’re here today. That’s why we continue to work with people across the system here in Western New York to help address those.”

Glenn Bobeck of Grand Island went to the Welcome Center and talked to Jennifer Givner, director of media relations and communications at the Thruway Authority, about the cashless tolls and general toll issues at the bridges.

“Thanks to the Thruway Authority and (Assemblyman) Angelo J. Morinello and (State Sen.) Chris Jacobs for organizing the event. I trust many issues were resolved as a result of the event,” Bobeck said. “Nonetheless I followed up with the Thruway Authority on a few issues. In summary I asked for thoughts on the following:

“1. Has or will an audit be done to ensure that any overcharges paid by residents or others will be refunded?

“2. Are Canadians being billed and charged?

“3. Why are tolls necessary to cross the GI bridges? What is justification?

“I will report back.”

Driscoll was asked about drivers who had been overcharged, on their bill, but who decided it’s not worth it to spend a half hour on the E-ZPass phone line to correct a $1 error.

“Well, that’s a personal choice, right?” Driscoll said. “But if there’s something on the bill that they don’t think is correct, I would encourage them to call.”

The Dispatch asked Driscoll about Canadian drivers. “Are Canadian license plates read through the cashless tolls and do they pay a toll?”

“Yeah, they are. So Canadians who have E-Z Pass, and there’s plenty, they go through the process just like an E-ZPass owner,” Driscoll said.

“Canadians who don’t have an E-ZPass?”

“So we’re working with the Canadian Province of Ontario now. We’re very close to an agreement with them on that issue,” Driscoll said.

Christensen said: “That’s voluntary, but we reach out to them and tell them it’s not voluntary. You need to pay your tolls. And that’s how you’ve got to pay.”

Dispatch: “Are these Canadians getting a bill in the mail?”

“Canadians can make their toll payments online. All they have to do is put their license plate number and their travel date and they can make that payment, as well as anyone from New York or Alabama or whatever other state that’s out there.”