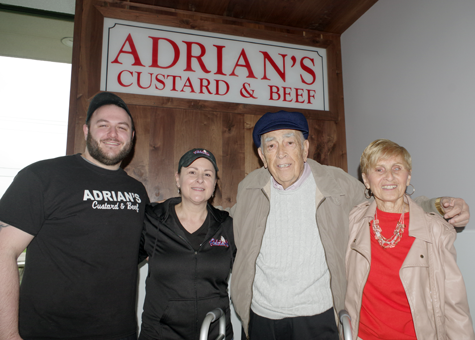 Patrick Antonelli and Toni Amantia of Adrian's brought the original sign to their new location. Original owners Peter and Adrian Figliotti joined them at a ribbon-cutting for the new Adrian's Saturday.

There is no comparing the new Adrian’s Custard & Beef to the old, said members of the Grand Island Chamber of Commerce at a ribbon-cutting Saturday celebrating the restaurant’s move across the street to 2352 Grand Island Blvd.

Now in her 13th year owning Adrian’s, Toni Amantia was in the old location across the street for the first 12 years before buying the old Town Café recently.

“The last seven or eight years, we just outgrew that building. So really moving here was the best opportunity for us,” Amantia said, explaining the restaurant can now extend its season, add to its catering menu, and perhaps lengthen the season to 10 months. The new Adrian’s is more than 3,000 square feet, dwarfing the only 500-square-foot location.

The move is a daunting one, Amantia admitted.

“I had a lot of sleepless nights,” she said, describing how she and her son Patrick have been at the new location “from morning till night from probably beginning of February, through the renovations and getting prepped, and even now.”

“You can’t compare it,” Fiebelkorn said of the new Adrian’s since it broke free from the old location at the tired old hag of commerce that the Grand Island Plaza has become. “When you own your own, you don’t have to count on the landlord who is going to take care of the property, or not, around you,” Fiebelkorn said.

“The good news is they’re right in the same neighborhood,” Fiebelkorn said. “They didn’t move far.”

Amantia’s decision to move Adrian’s across the street will be an economic catalyst not just for herself, but for the town as a whole, Fiebelkorn predicted. An upcoming sidewalk project that the town government spearheaded by securing a state grant will make the new Adrian’s neighborhood “one of the most walkable areas” in town, he said.

“I think this property is finally going to move once we get some streetscape and comfortable walking,” he said. “I think that’s going to make this more valuable. I think she’s going to help bring the property values up here.”

Two things are remaining the same: one is the original Adrian’s sign that was at the street for all 30 years of Adrian’s existence, and the other is the Island community support. Amantia said Islanders are showing their love on social media and in person, popping their heads in the kitchen window to say hi. “People are as excited as we are,” Amantia said of the reception to the new location. “It’s really nice. We’re feeling very thankful that we could make this move.”

Joined by friends, family, employees and members of the Grand Island Chamber of Commerce, Toni Amantia cut a ceremonial ribbon to open the new location of Adrian’s Custard & Beef. (Photo by Larry Austin)