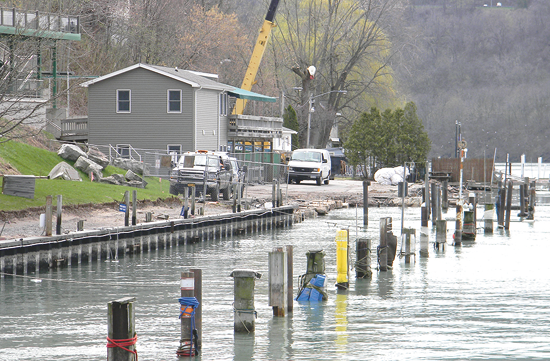 Views of the disruptions found on the Lewiston docks and riverside areas, as a massive shoreline rehabilitation project continues. (Photo by Terry Duffy)

Warmer spring weather – at long last – appears to be gaining some traction in Buffalo-Niagara. The Lake Erie ice boom is finally out and the last remnants of lake ice are slowly exiting the upper/lower Niagara River areas.

So, it would seem the 2019 boating season is right around the corner for these parts?

Thanks to higher-than-normal precipitation over the past few months in the Midwest, coupled with a melting snow pack throughout much of the Great Lakes, water levels across the system are above their long-term averages – and expected to remain that way for some time. Additionally, threats of lakeshore flooding are becoming more likely.

Meanwhile, on the Village of Lewiston waterfront, the 2019 boating season remains at an absolute standstill as village officials, residents and the boating community await repairs to Lewiston Landing.

Down below The Silo Restaurant at the Lewiston docks, there’s construction activity galore – and not a dock or a boat in sight. A massive shoreline rehab project, including new dock installations, is underway. It follows a number of response measures taken by the village following the damaging 2017 high water levels that struck the lower Niagara River and Lake Ontario throughout much of that boating season.

Michael T. Marino, P.E., engineer for the Village of Lewiston and CEO of Nussbaumer and Clarke Inc., said the lengthy administrative process has contributed to delays, as the Board of Trustees seeks financial recourse from 2017 damages. Also included in this process has been the Federal Emergency Management Agency, New York Department of State, New York Department of Environmental Conservation, U.S. Army Corps of Engineers, New York State Department of Homeland Security, plus the village’s insurance carrier.

“We are all disappointed that a majority of the landing will not be available until well into our short summer,” Marino said. “However, we are pleased that construction is now ongoing and a beautiful, new, resilient Lewiston Landing is just a few months away. It is important to note that there are many interested and involved agencies, each having requirements to fulfill, which have contributed to the time line.”

Marino explained damage from the storm needed to be inventoried, and, in several cases, the interested/involved agency had to send a team to investigate.

“Then negotiations were held to settle on the value to restore the landing to existing conditions and what each agency was willing to contribute for funding,” he said.

Discussing the specifics of the project, Marino continued, “It is notable to mention that replacement of the fixed finger docks in the ‘middle dock’ (the area near The Silo and south with existing sheet piling), was not considered damaged by the flood. The sheet pile bulkhead in that area and to the south is approximately 2 feet lower than moving to the north.

“There was much discussion regarding what the new normal water levels will be. It was decided that regardless if the middle docks were considered damaged, that entire area and to the south (in front of Water Street Landing) should be raised by 2 feet to protect from future flooding. This also included the addition of new floating docks to accommodate a flux in water levels and the high bulkhead wall.”

“Based on recent water levels and what has been reported in the news, this will be a wise investment,” Marino noted. 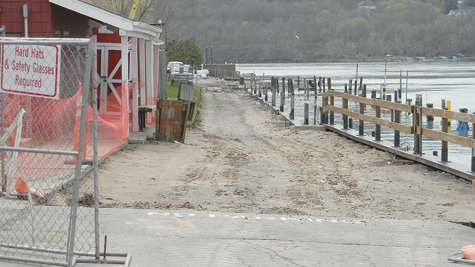 Views of the disruptions found on the Lewiston docks and riverside areas, as a massive shoreline rehabilitation project continues. (Photos by Terry Duffy)

He said the Lewiston Landing project has involved work being performed in three areas along the village waterfront. Mark Cerrone Inc. is serving as the prime general contractor while H.F. Darling is the subcontractor, responsible for installing the sheet piling and dock piles. Broken down, this work entails:

•At the “north” dock – the former wooden platform north of The Silo – the old wooden structure has been demolished; steel frame inspected; and stone backfill has been placed. Reconstruction is next, targeted for completion by the end of May.

•At the “south” dock, a turbidity curtain is being installed this week, with a plan to begin the installation process of the new steel sheet pile wall (to a level 2 feet higher than the existing wall). While the water side sheet pile wall is expected to be complete by the end of May, the tie backs, backfilling of the area and installation of utilities (which generally will be run from the harbor master area) is scheduled to be completed by the end of July.

•At the “middle” dock, the fabrication of the floating docks has added some time to the schedule. Installation of those, including utilities, is expected by mid-July. Raising the area and installing the sidewalk, landscaping, etc., is expected to be completed early August.

“As soon as slipholders can safely access the floating docks, they may be offered opportunity to do so,” Marino said.

He explained a challenge to the schedule is that, due to the fluctuating water level and current, the piling work all needs to be completed from the shore. “Therefore, the shore-side work cannot begin until the piling equipment is complete and out of the way.”

Also, due to fish spawning, DEC has prohibited work in the Lewiston docks work area for a period of time. Marino said a schedule was created to allow for crews to be able to switch to shore-side work during that time so progress can continue.

Beyond the inconveniences incurred to slip renters and boaters in general has been the significant impact to Whirlpool Jet boat Tours, which has seen its existing jet boat customer boarding and launch area below Water Street Landing become completely inaccessible and not open for use.

“The village has been coordinating with the Whirlpool Jet Boat and obviously this schedule is not at all convenient for them,” Marino said. “However, rather than consider further delay to any repairs at the ‘south’ dock, they have been working on plans to temporarily use the existing sheeted area north of the boat launch, in front of The Silo, to load and unload their boats. There will be continual coordination with Whirlpool Jet Boat as construction progresses and, as soon as accommodations can safely be made, their operations will shift back to the ‘South’ dock area.”

Whirlpool Jet Boat Tours owner John Kinney said, “WJBT has worked collaboratively with the village for the last 23 years, and we are going to make the necessary modifications to our program during construction. It’s short-term inconvenience, but the result will be a dramatically improved waterfront that all Lewiston residents and visitors will be able to enjoy for the next 50-plus years.

“WJBT would like to publicly thank Mayor Welch and the village council for ‘jumping through all the hoops’ involved in making this greatly needed improvement to our village become a reality. Well done village officials!”

Marino said that, while the Village of Lewiston certainly understands all the inconveniences incurred to many as a result of this massive rehab and the resulting limited use, it’s necessary to move forward on the project at this time. This is in consideration both of the public’s safety and future flooding threats.

“As it was becoming apparent that to add the resiliency measures and to cross all the I’s and dot the T’s with the interested and involved agencies that the schedule would push into the summer, it was decided to continue forward due to the limited functionality of the landing and risk to public safety due to the storm damage,” Marino said.

He noted the village is also working on a grant application through the State Consolidated Funding Application process, seeking funds for a new pavilion at Lewiston Landing, rebuilt staircases and upgrades to the fish cleaning station and harbormaster facility.

As to the mounting threat of flooding out on Lake Ontario, much of that is attributed to heavy rains in the Midwest, which has seen severe flooding conditions in rivers leading to the Great Lakes. According to the online news source Freshwater Future (www.freshwaterfture.org), Daniela Klicper, coastal stewardship coordinator for the Lake Huron Centre for Coastal Conservation, said, “Rising water levels from the Missouri and Mississippi rivers last month devastated parts of over 300 U.S. counties last month including parts of Wisconsin, Minnesota, Indiana, and Michigan.”

The result is far-higher-than-normal water levels found throughout much of the lower Great Lakes system. Freshwater Future reported Lake Huron water levels increased 5 inches over the past week. On Lake Erie, water levels are reaching historical levels, and the same is under threat for Lake Ontario.

Jonathan Schultz, coordinator with the Niagara County Emergency Management office, said Lake Ontario water levels increased 6 inches over the past month. And there are fears the lake could rise an additional 11 inches in coming weeks. Schultz attributed the rise on Lake Ontario both to the Midwest floods, but also to regional heavy precipitation/snow melt conditions affecting the Lake Ontario basin, including western Quebec. That led to flooding conditions on the Ottawa River and the St. Lawrence River system near Montreal, and has also reduced outflows from Lake Ontario by the International Joint Commission to address it.

Schultz said Lake Ontario’s water level this past week stood at 247.88 feet. That is compared to the lake’s spring 2017 flooding peak of 249.1 feet.

“We have been seeing lake level increases of almost a one-half-inch per day with the water outflow rate decreased in the past week due to flooding, which has been occurring in Ottawa,” Schultz said.

In response, measures are now being taken both on the state and federal levels to address any flooding potentials on the lake. Gov. Andrew Cuomo, who visited Lake Ontario shore communities this week, said more than 200,000 sandbags would be available for deployment to potential flooding counties along the Lake Ontario shoreline, including Niagara.

In addition, the Corps of Engineers, Buffalo District has pledged its efforts to supplement local and state efforts during and following flood conditions along Lake Ontario. On Tuesday, the Corps Buffalo District said it signed a declaration of emergency letter under public law 84-99 to supplement local and state efforts as needed. Under the measure, the Corps of Engineers would elevate its emergency operations center from level IV, steady state operations, to level III, monitoring operations – the same level that was used in 2017, when technical assistance and flood control measures were provided to communities along the Lake Ontario shoreline.

“The district has not received any formal requests for assistance, but we stand ready to supplement local and state flood fight efforts, and look forward to working with our community partners,” said Lt. Col. Jason Toth. “We are committed to doing our part to ensure public safety by providing vital public and military engineering services.”

Schultz said, “Niagara County’s Emergency Management Office will be working with our local municipalities, some of which have been contacted already on potential needs and location of staging over the next week.”

He noted Niagara County expects to put in a request for 20,000 empty sandbags, a sandbag machine, 12 3-inch pumps and two 6-inch pumps, in addition to roughly 600 to 800 feet of aqua dam for use in the various flooding areas.

“We will most likely put in our request to NYResponds in the next few weeks based on what the water levels and weather do. Hopefully, levels will stabilize and we will not have to implement a full-on response effort. This is our initial effort for planning and, if more is needed, we will work with NYSOEM to fulfill our needs,” Schultz said. 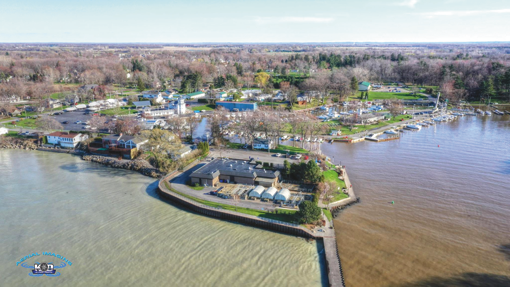 Flooding threats continue on the shores of Lake Ontario, as seen from this drone photo of the Wilson harbor area. (Photo by Kevin and Dawn Cobello, K&D Action Photo and Aerial Imaging)