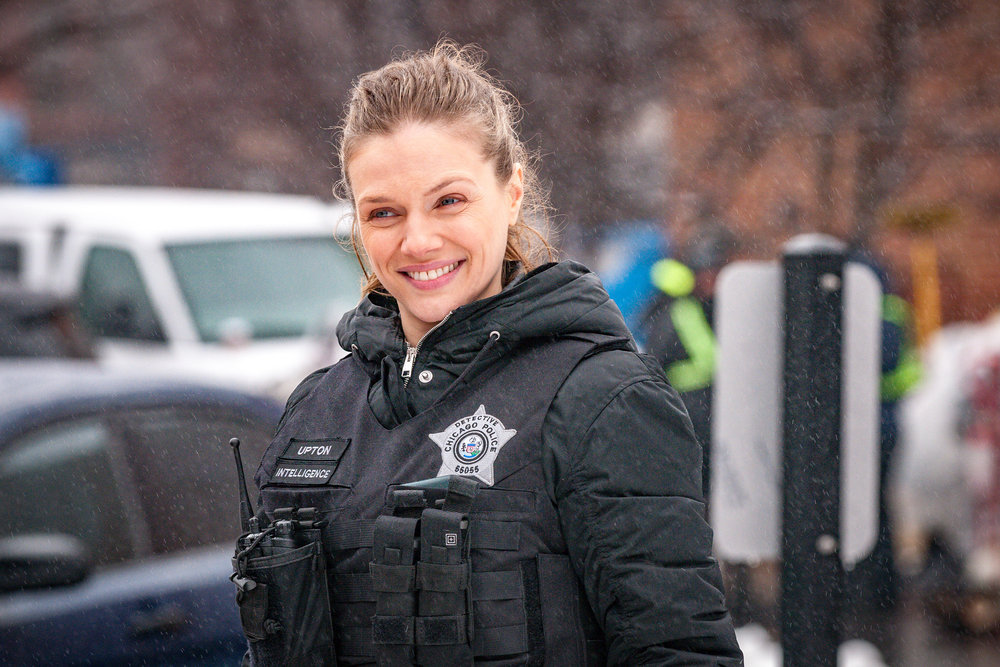 Tracy Spiridakos seemed like a great pickup and a worthy addition to the “Chicago P.D.” team when it was announced she would join the hit NBC series in the 2017-18 season. But her casting also came with some questions – namely, would her character, Hailey Upton, serve as a replacement for the departing Erin Lindsay (Sophia Bush)? If so, would she become a love interest for Jay Halstead (Jesse Lee Soffer)?

Conversely, if showrunners opted to go in a different direction, what would Upton do – and would she get lost in the shuffle? This is a big show, in terms of actors, and many have come and gone without leaving a mark on the show’s legacy.

Well, while fans were excited and critics pondered possible storylines, it’s hard to imagine anyone foreseeing Upton – not two full seasons in – at the center of “Chicago P.D.’s” most interesting arc.

Producer Rick Eid and his team didn’t pair the straight-shooting Upton with former military man Jay, but rather with the loosey-goosey Adam Ruzek (Patrick John Flueger).

At the same time, the writers did partner Upton with Halstead, thereby keeping the idea of a love-triangle afloat.

In terms of presence, Spiridakos has made herself known. She has no trouble holding her own in a large cast, which is no surprise to those who watched the Winnipeg native lead the sci-fi series “Revolution.” There, the actor splendidly portrayed Charlie, a reluctant hero in a post-tech-apocalypse world. The role required large doses of humanity, morality and physicality – good traits for a police officer working in Sgt. Hank Voight’s (Jason Beghe) intelligence unit on “Chicago P.D.”

So, as the sixth season of “Chicago P.D.” winds down, how Voight’s squad handles a violent offense is about to put a wedge between Upton and Ruzek.

That would be the same Ruzek who was making eyes with Burgess (Marina Squerciati) following the murder of her boyfriend in last week’s episode.

Upton will need a shoulder to cry on – well, more like a buddy to beer with – and that’s likely to be Halstead.

Oh, and we’re hearing someone might die – and freaking Kelton (a masterfully loathsome John C. McGinley) will probably be elected mayor.

With so many interesting angles, it’s no wonder this show continues to dominate its 10 p.m. timeslot – even as a third star, Jon Seda (Antonio Dawson), is set to depart. He will follow in the footsteps of Bush, whose character was transferred; and Elias Koteas, whose Alvin Olinsky was killed in prison. 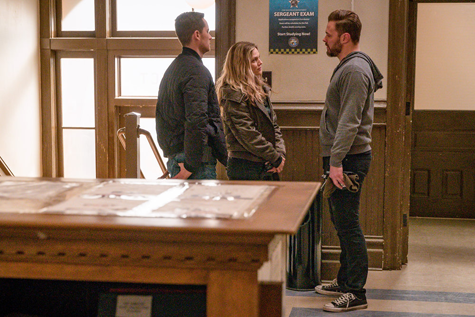 Q: We have a lot of snow in the Buffalo area. But is seems like almost every episode of “Chicago P.D.” is cold and snowing. I’m wondering: Is it ever warm outside on set?

Tracy Spiridakos: (Laughs) That’s an excellent question. It does get warm, but way later. It’s actually not too bad out today. When we come back, we come back in July, it's very, very hot; and we are in our fall jackets, because its airs in September. And so we're dressed for fall, but it's actually super, super hot at those first few episodes. So, around there is when it is.

Q: We just found out that your costar, Jon, is not going to be coming back, which we're very sorry about. Tell me a little bit about Jon: What he's brought to the show, and what he's meant to you as a coworker.

Tracy Spiridakos: We're all so sad about Jon. He is, you know, it's a big family over here, and we were really sad to hear the news. Jon is incredible. One of the nicest people that I've ever met in my life truthfully. And he’s just incredibly talented, and one of the warmest people that I've had the pleasure of being around. I mean, I could go on and on for a long time about him. He’s going to be really, really missed.

Q: A show that loses three of its major stars over the course of three seasons really shouldn't be obliterating its competition, ratingswise, and yet that's what continues to happen with this show. Why do you suppose “Chicago P.D.” continues to be so popular?

Tracy Spiridakos: I think one of the things that makes the show really unique is we have our tact adviser, his name is Brian Luce, he works really hard to make sure that the show is as authentic as possible. I think he works with the writers, as well, and then works with us just to try and make it as authentic as it possibly can be. And I think that really shows – his work and his commitment to our show – I think is a big part of what separates our show from a lot of others. 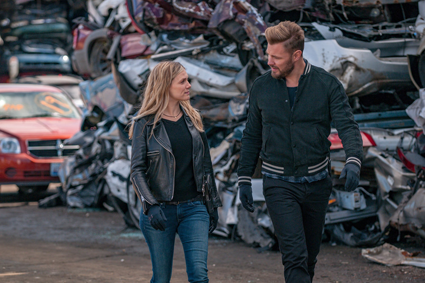 Q: I'm wondering if that's the biggest challenge for you as an actor. You starred on “Revolution,” you recurred on “MacGyver” and “Bates Motel,” and shows like that require a degree – or sometimes more than a degree – of suspended belief. But this is obviously not that. With “Chicago P.D.,” you're depicting a real profession, in a real city, and one that has really large issues in terms of law and order. So is that, for you, the biggest challenge – no pun intended – of doing the part justice?

And I think the other thing that is really excellent about our show is that Rick Eid, when he started on our show, he said that he wanted to talk about Chicago 2018-19, you know, current issues that are happening in the city right now. And that is exactly what we do. I'm proud to be a part of a show that wants to talk about issues that are happening in the city. 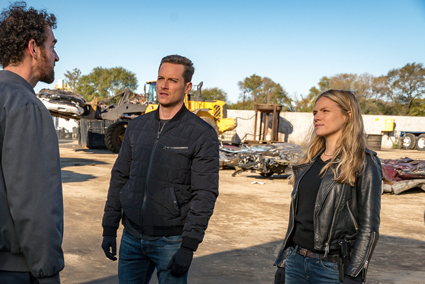 Q: When we talked last, you were sort of at the beginning stages of this Upton role, and now you're two seasons into it. I don't know if you had certain expectations or certain thoughts about it coming into the role, but how has it been for you in reality? Has the role been what you hoped it would be? Is it more than that?

Tracy Spiridakos: It’s grown to be definitely more than I expected it to be. I didn’t really know what to expect. I was really excited to get to be a part of the Dick Wolf family and to be a part of this whole team. And I wasn't sure how Upton’s growth would come and what would happen. I think one of my favorite things to see is all the relationships that have grown, especially in this last season. Not only between the dynamic with her and Ruzek, but just all the relationships in general; with Upton and Burgess, and with Upton and Halstead, and everybody she's had different interactions with. And we've gotten to see these dynamics really sink deeper for her, and these relationships grow in a bigger way. And that's been a ton of fun to play as an actress, but also I think just to get to watch Upton get really closer in this team.

Q: You were brought in after Sophia Bush left, and a lot of people just jumped to the assumption that Upton would just immediately take up with Jay. And I love the fact that they instead paired her with Ruzek – especially in light of their personalities. What did you think when you learned that that was the direction you were going to be going in? What have you enjoyed about working both with Patrick and with Jesse?

Tracy Spiridakos: I was thrilled when everything came up with Ruzek, because I think it's really fun. I think it was something that people didn't expect. And I know that there are the Burgess and Ruzek fans out there that really are not about this pairing – which I totally understand. I thought it was a really interesting way to go, like an interesting angle to go with these characters' developments. And it's been a ton of fun to play.

Patty’s hilarious. And we have a ton of fun working together. It's nonstop laughter. It's been really lovely to get this one-on-one opportunity to get to work with him like this. I mean, they're both wonderful – and Jesse is incredible, as well. They're both just wonderful human beings, incredibly talented actors that I've (learned) so much from both of them individually in how I approach my work. And I feel really grateful to have had an opportunity to get to do that.

But I think the choice that they made to have it go in that direction, I thought, was really interesting, and it's been really fun. And Patty and I have had a lot of fun with figuring it out and playing off each other and just kind of allowing this relationship to evolve into what it's become.

Q: Now, I know from talking to you in the past that you're very good about keeping secrets. You're very good about not revealing things that you shouldn't. But I am told that you have a particularly interesting story arc ahead, and it appears to involve Ruzek. So what, if anything, can you tell me or tease me about these last few episodes of the season?

Tracy Spiridakos: Ummmm. … Well, I can tell you that there is a case that Ruzek and I are working on together, this violent crew is robbing a pharmaceutical delivery truck. And in what we uncover, the reason why they are committing these robberies just throws everything for a bit of a loop and has us look at our situation, our relationship, in a way that we haven't before.

Q: Interesting. We've seen moments recently between Upton and Jay teasing a possible love triangle, but now this past week we saw some interesting looks again between Ruzek and Burgess. So, is a love square a thing? And is that possible? 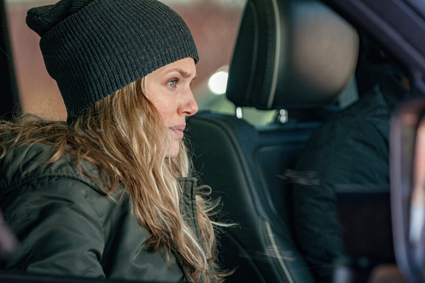 Upton has some serious thinking to do in upcoming episodes. (NBC photo by Matt Dinerstein)